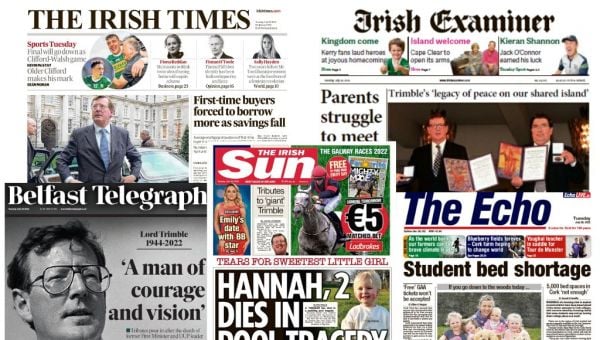 The Irish Times reports first-time buyers have less spending power than a year ago and are having to borrow more to secure a home, while former first minister of Northern Ireland and Nobel Peace Prize winner David Trimble has been remembered as “a political giant” following his death aged 77. 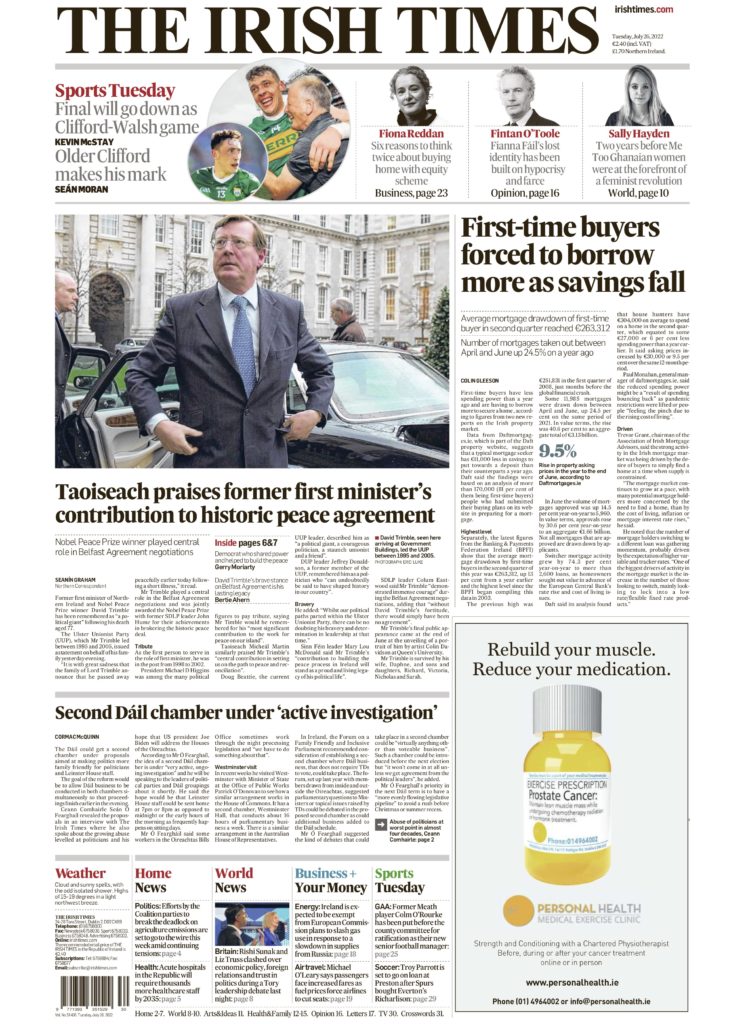 Some parents are missing meals to cover back-to-school costs, according to a Barnardos survey in the Irish Examiner. The latest annual survey puts the basic cost of sending a child to secondary school for the first time this September at €814. 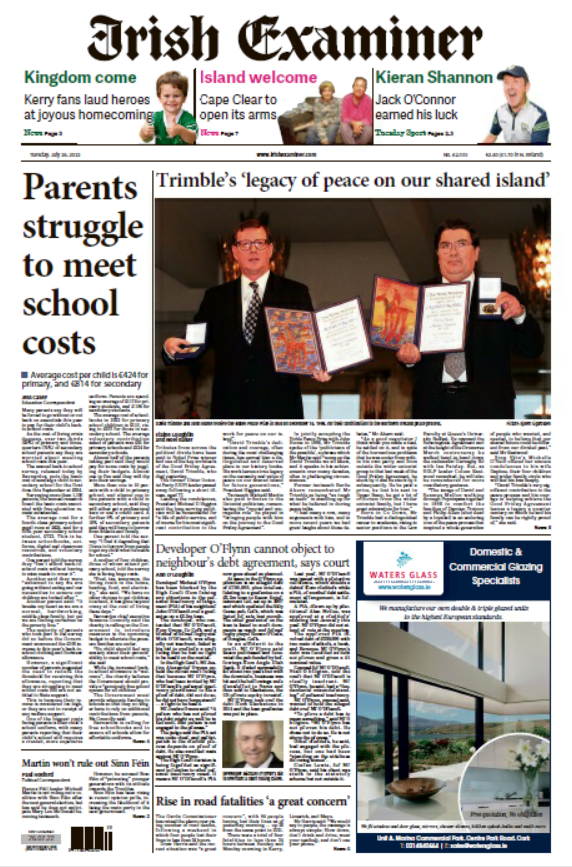 The Irish Sun reports a two-year-old girl has died following a tragic accident involving a paddling pool in Co Laois. 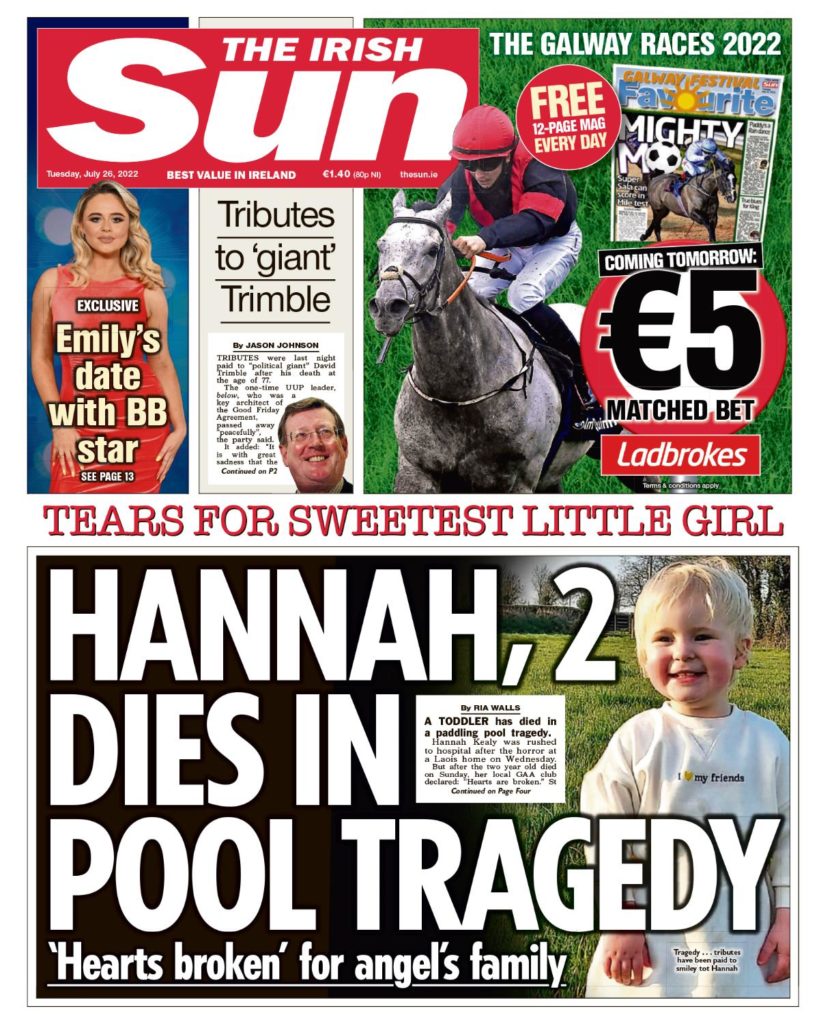 Warnings of a looming crisis in student accommodation have been issued ahead of the winter semester in Cork colleges, according to The Echo, with concerns raised by a housing charity that some students may end up turning down college places as a result.

In Northern Ireland, the Belfast Telegraph leads with a full-page tribute to David Trimble, describing the Good Friday Agreement architect as “a man of courage and vision”. 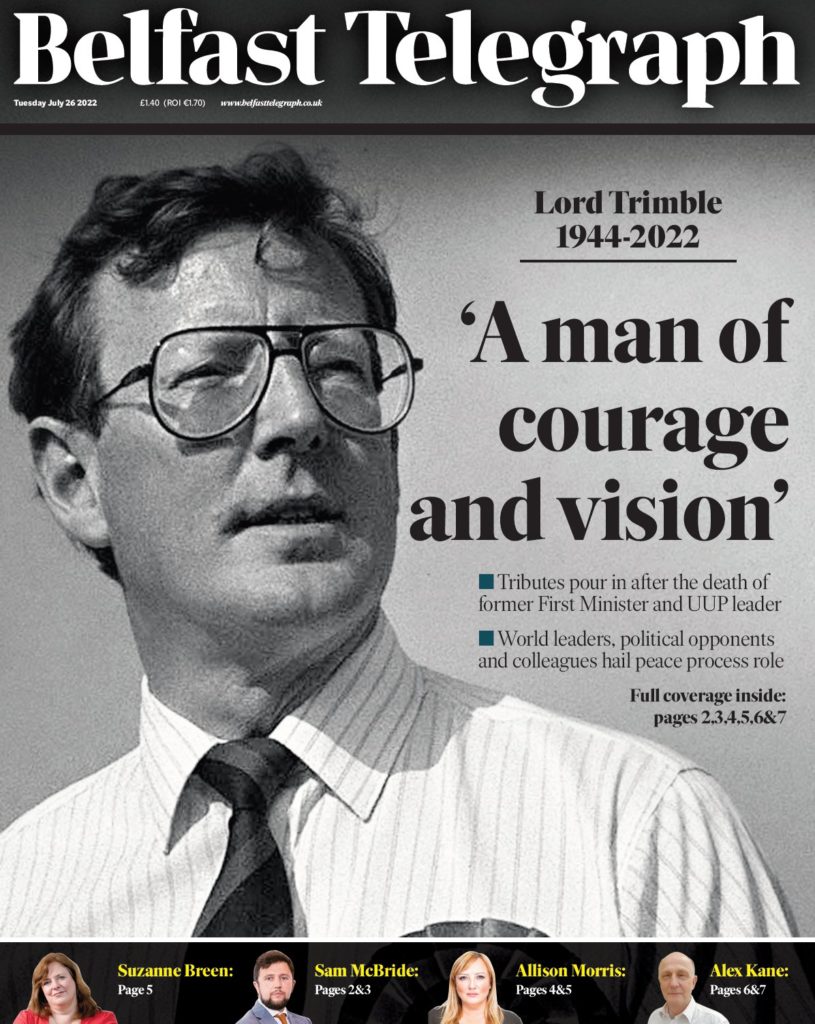 In Britain, the front pages see the country’s former chancellor and foreign secretary clash over taxes, inflation and personality in their bids for Tory party leadership.

The “gloves are off” according to the i, which characterises the inter-party contest as “nasty”, while Metro dubs it “blue on blue warfare” and The Times says: “Bitter Tory rivals get personal.”

YOU’LL LOSE US THE NEXT ELECTION

The Daily Express writes that the contest’s “great divide” is the question of tax cuts “now or later”.

The question of inflation was also central to the debate, as The Guardian reports, while Liz Truss’s claim that Rishi Sunak would be a “new Gordon Brown” leads The Daily Telegraph.

‘PM Sunak would be a new Gordon Brown, claims Truss’#TomorrowsPapersToday

The Daily Mail leads on Ms Truss’s promise to “curb militant unions” amid a strike wave in the UK.

Elsewhere, The Independent reports the public spending gap between Northern England and London has doubled.

The Financial Times reports fears of a gas crisis in Europe are mounting as Russia cuts more supplies.

Children are being sold “deadly knives” without having to prove their age, according to the Daily Mirror.

The Sun reports Cristiano Ronaldo is flying back to Manchester to demand he is allowed to leave Manchester United.

And the Daily Star leads on research into the reduction of crime due to police patrols.