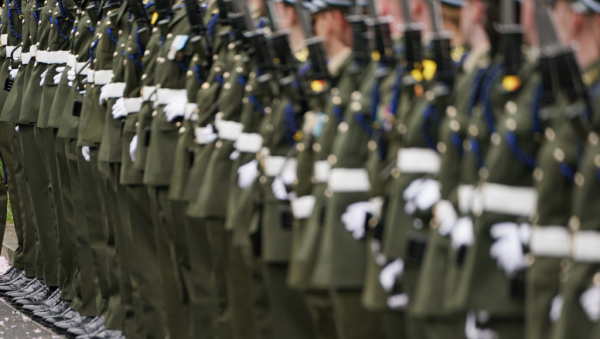 An army private is asking the High Court to order a stop to his discharge from the Defence Forces, allegedly due to being convicted for possession of medications without an import licence and expired prescription supplements.

Neil Browne, who is based at Collins Barracks, Cork, says he was convicted in April 2021 in a District Court of a number of criminal offences in relation to the medications and has no other convictions.

In court documents, it is said the convictions arose out of a Garda discovery at his home in 2019 of clenbuterol hydrochloride tablets, valued at €50, from a Bulgarian pharmacy which, he claims, was to treat his wife’s bronchitis, along with some expired prescription bodybuilding supplements.

He claims he was unaware when he purchased the tablets for his wife that their importation required licencing from the Irish Medicines Board.

Mr Browne, who has served in the Defence Forces for 27 years and currently works as an army cook at Collins Barracks in Cork, says he promptly paid the District Court fine of €1,500.

His commanding officer later informed him this level of fine would restrict him to a conduct rating of “fair”, which would render him ineligible for continuance in service, he claims.

Following this, it is claimed, he successfully appealed his conviction and the fine was reduced to €1,100, which brought him under the required conduct rating threshold.

Despite this, Mr Browne says he was again brought before his commanding officer who said his discharge had been recommended on the basis of his conviction of a criminal offence.

Mr Browne claims his appeal of this decision was rejected and he was informed the decision was taken pursuant the Defence Force Regulations, but the reasons were not explained.

At the High Court on Wednesday, Mr Justice Charles Meenan granted a two-week stay on the discharge, which was due to take effect on Thursday.

The judge expressed his dissatisfaction that the application, brought on an ex-parte basis, came only one day before the discharge, effectively “robbing” him of the ability to direct that the respondent Minister for Justice would be notified in advance of the stay application.

He directed the Minister be notified of the application for leave and gave liberty for him to apply for the removal of the stay.

In his action against the Minister, the Attorney General and Ireland, Mr Browne contends that it was represented to him “expressly and/or impliedly” at a meeting in June 2021 that the “sole issue” that might give rise to a difficulty with his continued service in the forces was the level of the fine imposed by the District Court.

He says it was never conveyed to him that he would be discharged on the basis of his conviction alone or that the conviction would form part of a discharge decision.

It is claimed Mr Browne relied on the alleged representations and/or “legitimate expectations” in directing his Circuit Court appeal purely to the issue of the amount of the fine imposed and not the conviction itself.

He alleges the discharge decision is a “clear interference” of his rights and/or interests and he was not afforded fair procedures. He says he was not provided with reasons for the change of position allegedly adopted in respect of his conviction.

Mr Browne seeks an order quashing the decision to discharge him, as well as various declarations, including that the decision was contrary to his legitimate expectations.

The matter was adjourned until a date next month.