JOHN ‘Shark’ Hanlon told us on these pages about his confidence of Hewick’s chances in the Galway Plate at the Galway Festival this evening and so it came to pass as horse landed one of the biggest wins of the popular trainer’s career. 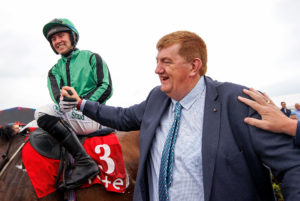 Afterwards, Hanlon thanked Gordon Elliott for ‘loaning’ him Jordan Gainford and the young Wexford jockey gave Hewick the perfect, patient ride while staying out of the trouble that saw a number of fallers. However, it wasn’t all plain sailing, after pulling away from the rest of the rest of the field loose horse Excelerator Express threatened to impede Hewick on the rail as Darasso was making ground in second place but the line came just in time.

Similarly to Skyace, the horse bought for just €600 who went on to win Hanlon his first Grade 1 last year, the shrewd Shark picked up Hewick for a relatively meagre fee of just €800 at the horse sales in Goresbridge. The win now takes the horse’s winnings over the €300,000 mark.

Hanlon’s voice crackled with emotion as he spoke to RTE after the race, the occasion made all the more special as his mother and father to be there to witness it.

“Our game has gone very tough with the price of feed and everything and we are a small yard. It is getting harder every day and to win this is unreal. My mother and father haven’t been racing for three years and are here,” said Hanlon.

Hewick came into the race after an eye catching win at Sandown last April in a three and a half mile handicap but there were concerns about him running this course which was almost a mile shorter. However, the manner of the win immediately put a shot at the 2023 Aintree Grand National into mind but Hanlon has a shorter term target for him – the Kerry National at Listowel in September. It’s a race that means a lot to Hanlon having previously won it in 2011 with Alpha Beat.

“I am coming here all my life. This and the Kerry National, I have won both and we’ll head back to Kerry with him now,” said Hanlon.

‘Shark’ is sweet on Hewick’s chances in the Galway Plate