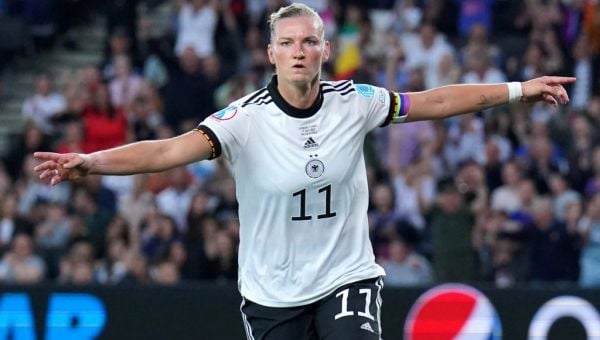 Alexandra Popp struck twice to send Germany through to their ninth European final following a 2-1 win over France to book their meeting with England at Wembley on Sunday.

England had already become the first team to secure a final place following their 4-0 win over Sweden at Bramall Lane, but the Wolfsburg forward’s two goals ensured Germany would be the host nation’s opponents.

Popp beat her marker to tap home Germany’s first in the 40th minute before France levelled the tie with an unfortunate own goal from goalkeeper Merle Frohms.

Kadidiatou Diani’s shot rebounded off the post and onto the back of the goalkeeper before going into the net to level the score.

Popp’s header in the second half saw the 31-year-old draw level with England’s Beth Mead in the race for the golden boot with six goals in the competition so far, in front of 27,445 fans at Stadium MK.

In contrast to the first semi-final where Sweden almost had a goal from kick-off, the one in Milton Keynes started in a much more cagey fashion, with both sides trying to test out the other and no significant chances for either.

Pauline Peyraud-Magnin had to make a straightforward save from a Lina Magull effort direct from a free-kick, the German midfielder getting the ball over the wall and down but it was straight at the French goalkeeper.

Germany’s main threat in the opening half an hour came from free-kicks, with the French defence well organised enough to prevent other attacks, but they did concede a number of potentially dangerous set-piece opportunities, although the Germans were unable to capitalise.

France had a momentary lapse of concentration at the back and Germany capitalised in the 34th minute, with Popp just beating her marker in the centre of the box to fire home from Svenja Huth’s cross.

Just before half-time France struck the equaliser, as Germany conceded their first goal in the tournament, when Diani’s strike from distance rebounded off the post and onto the back of goalkeeper Frohms before bouncing into the net.

The second half started in much the same fashion as the first, although Germany looked the more promising on the attack.

France had two good chances blocked on the goal-line in a matter of minutes just after the hour mark, with Selma Bacha’s shot blocked by Kathrin-Julia Henrich, before France captain Wendie Renard came up for the following corner and had her attempt saved by Frohms.

Having been so solid and organised in their defending, Germany were caught twice, with France seizing on a misplaced pass before feeding in Diani, who ran into the box but narrowed her angle on goal, with Frohms making a straightforward block.

Having struggled to get forward for large parts of the second half, it was Germany who retook the lead moments after having a shot blocked in the area when Popp rose highest to nod home the winner.