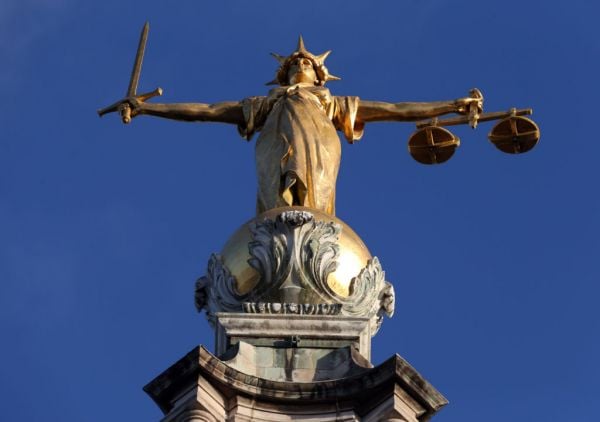 A gunman who shot a father dead in front of his seven-year-old daughter has failed in a bid to have his conviction overturned at the Court of Appeal.

However, a jury found him guilty and he was sentenced to life imprisonment by Mr Justice Tony Hunt at the Central Criminal Court in May 2015. O’Neill had 116 previous convictions at the time.

Lawyers for O’Neill later claimed the conviction was “unsafe and unsound” and launched an appeal, claiming evidence from a forensic expert on the presence of gunshot residue found on clothes O’Neill had dumped in a skip should not have gone before the jury.

In a submission to the appellate court, Ronan Munro SC, for O’Neill, described how a single particle of a firearms discharge residue, located in the internal right pocket of a coat found hanging on Barry George’s kitchen door, had helped convict the Englishman of Jill Dando’s murder.

The BBC presenter had been shot dead as she stood on the doorstep of her house in south London in April 1999, in what was widely described as an ‘execution-style’ killing.

Mr George, who has family in Cork and Limerick, was found guilty of Ms Dando’s murder following a trial in 2001 but he successfully appealed against the conviction and was acquitted in 2008.

Mr Munro claimed the “kernel of the case” against his client had been circumstantial gunshot evidence. “And had it not been made available to the jury, there would not have been a conviction,” he added.

At one stage during his appeal, O’Neill, formerly of Lissadell Drive, Drimnagh, Dublin but now a prisoner at Wheatfield Prison, was warned by Mr Justice John Edwards, presiding, to stop “gesticulating and shouting” at members of the court after the appellant attempted to address the three appeal judges directly.

Counsel for O’Neill had argued that firearm residue found on the clothing could have been contaminated by the garda who seized the bags because he carried a gun.

During the trial, O’Neill’s barrister had also objected to being “interrupted” by the judge as well as objecting to the forensic evidence being put before the jury.

The grounds of appeal were that the judge engaged in “excessive commentary” during the defence’s cross-examination. It was submitted that this could have undermined the cross-examination, which then could have misdirected the jury and rendered the conviction unsafe.

A second ground of appeal was that the judge wrongly ruled that the forensic evidence was admissible, despite objection from the appellant at the trial.

At the Court of Appeal on Wednesday, Mr Justice Patrick McCarthy said O’Neill’s trial was based on “circumstantial evidence” and that it was claimed by the appellant that the trial judge had “descended into the arena, rather than marshal events”.

However, Mr Justice McCarthy said that in circumstantial cases, judges can be required to go further regarding evidence. He said the court found that in this case the judge “did not go further than necessary regarding the charges as a whole”.

“At no time were the jury led to believe that the decision on the view which they might take on any relevant fact was not solely a matter for them.

“The exchange with counsel which was the subject of criticism did not undermine or disparage the cross-examination as alleged. We are not persuaded accordingly that any fault can be found with the charge either,” Mr Justice McCarthy said.

On the trial judge allowing the forensic evidence to go before the jury despite defence objections based on contamination, Mr Justice McCarthy said this ground would also be dismissed.

“There is no reason to suppose that the jury approached this evidence with anything other than care and weighed it in the ordinary way. The judge’s approach, when adjudicating on the issue of admissibility, was thorough, careful and well-founded.

“Later, he dealt with the matter adequately in the charge. We therefore dismiss this appeal,” Mr Justice McCarthy said.

Mr Wilson was shot in the back and a shotgun was used to carry out the murder. Six rounds were discharged but only two of them entered the deceased, one to fatal effect. Six cartridges were later retrieved at the scene by gardaí.

Mr Wilson died almost instantaneously in the front hallway of his home.

Gardaí were notified of the shooting at about 2.55pm and within minutes of the event a vehicle similar to one described as leaving the scene was found to have been set alight using an accelerant at nearby Cherry Orchard Crescent.

The fire was put out and the registration was traced to an address in Kildare, which had reported a stolen car several days before.

Scarves and gloves with barcodes still on them were retrieved and traced to purchases made by O’Neill the day before that were captured on Dunnes Stores’ CCTV.

Gardaí had O’Neill under surveillance after the shooting and he was observed placing two JD bags into a skip that night, which were retrieved and found to contain clothing similar to that worn by the shooter.