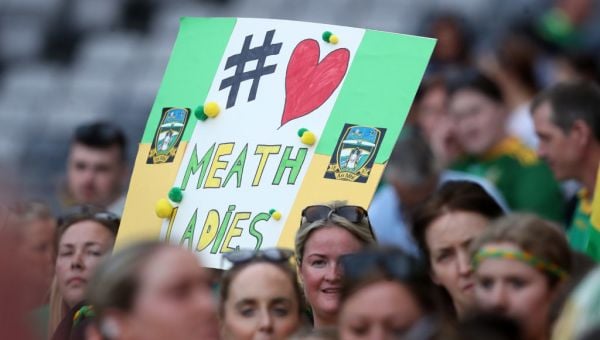 Kerry will be looking to complete the football double on Sunday as the county’s women line out against reigning champions Meath in the All-Ireland Senior Ladies Football Final.

Spirits will be high in the Kingdom after the success of the senior men’s team against Galway last weekend, with Darragh Long and Declan Quill’s charges likely champing at the bit to take yet another cup back to the southwest.

However, the 2021 champions have continued to show the strong form that saw them past Dublin in last year’s decider.

Before that, the Junior final between Antrim and Fermanagh is first up, throwing-in at Croke Park at 11.45am.

Fermanagh showed themselves to be a big threat up front last time out, slotting seven goals past Limerick in the semi-final, winning 7-9 to 3-12.

But with Antrim claiming a 14-point win over Carlow at the same stage, they won’t be downplaying their chances of playing in the intermediate ranks in 2022.

The six team captains gathered at @CrokePark yesterday ahead of next Sunday’s @TG4TV All-Ireland Finals!

The Kingdom to face Royal County Resistance in Senior Final!

In the second showdown of the day, Laois meet Wexford at 1.45pm in the Intermediate final.

Wexford’s emphatic victory over Roscommon on July 10th, ending 6-11 to 1-9, will undoubtedly spur on the Yellow Bellies, in contrast to Laois’ much narrower win over Clare, finishing 2-21 to 2-19.

Last up, the Senior final gets underway at 4pm.

Kerry and Meath have never before met in a senior decider, nor have they met so far this year in neither the championship or the league.

Meath’s path to this year’s final was filled with close encounters, with the Royals beating Donegal by just two points in the semi-final after getting a one-point victory over Galway in the quarter-final.

Despite this, Meath know how to grind out the win and, having silenced the doubters last year, have established themselves as one of the new forces in Ladies Football and look unlikely to loosen their grip the Brendan Martin Cup for another year.

All three of Sunday’s games will be televised live on TG4. Coverage of the Junior final begins at 11.35am, followed by the Intermediate coverage from 1.30pm, and finally the coverage of the Senior final from 3.30pm.