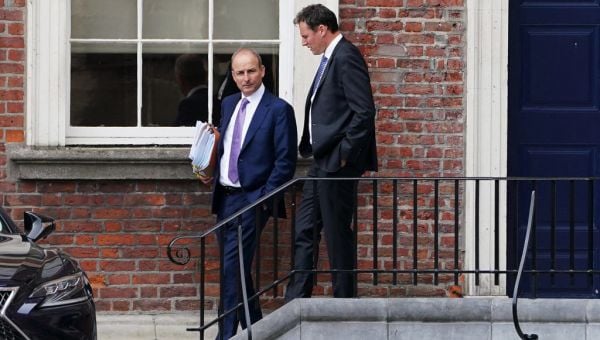 The Government has failed to reach an agreement on what emissions targets to assign to key sectors of the economy during the last scheduled Cabinet meeting before the summer recess.

Talks on Tuesday night ended without agreement between the three coalition leaders, leading to an expectation that the targets would not be ready for sign-off at the Cabinet meeting scheduled for Wednesday morning.

Green Party leader and Minister for the Environment Eamon Ryan told reporters on his way into Cabinet that he was hopeful they could “close the difference” on emissions targets, though admitted the talks had been “tricky”.

Mr McConalogue was seen giving a thumbs up and smiling to the media as he left Dublin Castle.

Following Cabinet, Minister for Justice Helen McEntee told RTÉ Radio that “this is not a straightforward process”.

“Negotiations are ongoing and no we haven’t reached an agreement yet. Whether we will reach it today or this week, I don’t know.”

She said that the delay was caused by the Government trying to “get the right agreement here”, and that it was not just about agriculture.

“[It’s] that we understand what it is we’re agreeing to, that whatever we agree to is realistic, that it’s ambitious, because everybody needs to be ambitious here.

“But that there is full agreement, not just on all parts of the three government parties, but that we have the support and the buy-in of everybody who is involved in reaching the overall targets,” Ms McEntee said.

Speaking to the media at Dublin Castle afterwards, Mr Ryan said that an agreement had not been found and that work was still ongoing.

He would not comment on Green Senator Pauline O’Reilly’s claim on RTÉ Radio that the Green Party could walk from government if a 22 per cent or 23 per cent reduction in emissions was set for the agriculture sector.

“I don’t think that the Green Party can put up with that kind of a low figure,” she said.

The Climate Change Advisory Council has recommended that the agriculture sector cuts its greenhouse gas emission by 22-30 per cent, as part of Ireland’s aim to reduce its total emissions by 51 per cent by 2030.

Some backbench TDs have said the emissions ceiling should be set on the lower end of that range, with climate scientists and some opposition parties calling for a reduction on the higher end.

Speaking on his way into Cabinet, Mr Martin said it is not easy to reach an agreement, but the Government is “determined to get this resolved”.

“What the difficulties reflect in reaching an agreement, they reflect the significance of the challenges. I think it’s important that we get a resolution, but that we do it in a way that facilitates delivery down the road and real momentum in relation to climate change.”

Mr Martin added that part of the challenge with agriculture is in acknowledging the greater part it will play in the energy sector in the future, and to recognise the importance of food production.

Mr Ryan, the Minister for Transport and the Environment, acknowledged that working out the mechanics of the agreement has been “tricky”.

He added: “I hope we can close the difference and agree the approach today.

“It’s very significant for every section in Irish society.

“We’ve got to make sure the changes we make are for the better – good for farmers, good for transport, good for energy, good for employment, good for protecting us against the cost of living.”

An Environmental Protection Agency report released last week found Ireland’s greenhouse gas emissions increased by 4.7 per cent in 2021 compared to 2020, and are now 1.1 per cent above 2019 pre-Covid restriction levels.

He added: “From transport, to energy, to agriculture. I would have to say in fairness to agriculture, already the targets that have been set are very, very challenging, and will be challenging.

“We’re looking at ways as to how in all sectors, including agriculture, we can stretch those targets and ensure a meaningful contribution all round.

“What we’re trying to do here is avoid the worst consequences of climate change. We’re not going to avoid climate change now, we can see that with the heatwaves during the summer, but what we can do for future generations and for our children’s children, we can limit those consequences.”