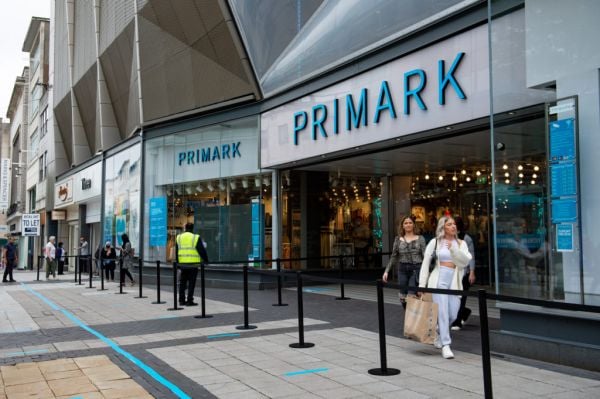 The first set of accounts made available by Primark show Penneys’ Irish retail revenues in the 53 weeks to the end of September 18th last totalled €482.2 million.

The €482.2 million in revenues for the 53 weeks work out at the average weekly revenues of €9 million for the Irish network of Penneys stores.

Outlining the Covid-19 impact on the business, the directors state that all Irish stores closed from October 22nd 2020 until November 30th 2020.

The company’s stores re-opened for the Christmas period in early December but closed in January 2021 and did not reopen until May 10th 2021.

Despite the Covid-19 impact, the accounts disclose that the company repaid to the State €22.9 million the business received in Covid-19 wage subsidy supports from the Irish Government concerning store closures during the period.

The accounts disclose that since year-end, the firm has paid out cash dividends totalling €475 million – €200 million last October and €275 million in January 2022.

This followed the business -owned by Associated British Foods plc – last year paying out no dividend after paying out dividends of €150 million in the prior period.

Primark opened its first store in Dublin in 1969 under the name Penneys and today operates in over 380 stores in thirteen countries across Europe and America that include 37 Penneys stores here.

The directors state that it was very much the case in Ireland that Primark’s operations responded with agility and confidence to the restrictions in place.

Unlike other major retail brands, Penneys was not able to rely on online sales to make up for some of the lost sales during Covid-19 shut-downs of its “bricks and mortar” outlets.

The directors state that they “expect the company’s full year sales and profit to be higher next year with the removal of Covid-19 restrictions”.

The directors state that “it was clear how enduring and relevant the Primark brand and proposition remained for customers, evidenced from the strong demand in each market upon respective re-openings”.

The directors state that they intend to invest over €250 million in the Irish market over the next 10 years including creating 700 more jobs in Ireland and over the next three years increasing selling space here by 20 per cent.

The directors state that “this investment reinforces the company’s long term commitment to Ireland, high street retail and local communities across the country”.

The bulk of revenues were made up of inter-company supplies of inventory at €1.61 billion, the Irish retail revenues of €482.2 million and revenues of Primark Way franchise income of €263.9 million.

The Primark Way franchise is a business format which is developed and run from Ireland and provides Primark intellectual property, know-how and services to Primark businesses overseas.

A 10 per cent decrease in Primark Way franchise income arose to Covid-19 related store closures across the global estate.