‘Shark’ is sweet on Hewick’s chances in the Galway Plate

CARLOW trainer, John Shark Hanlon, is eyeing success in the Galway Plate on Wednesday evening with Hewick, his Bet 365 Gold Cup Handicap Steeplechase winner. The €270,000 race is coveted by all the big trainers and Hanlon’s stable hope is facing stiff competition from trainers who live only a few miles away from his yard. Emmet Mullins is saddling Cheltenham winner, The Shunter, while the Rich Ricci owned El Barra, trained by Willie Mullins, is the likely favourite. Another fancied Mullins horse, Easy Game, will have Carlow jockey Jack Foley on board. Gordon Elliott will have Davy Russell on Battleoverdoyen, while Gabynako and Ronald Pump are others will fancy their chances of reaching the winners enclosure – and that is only some of the fancies for this 2m 6f test. 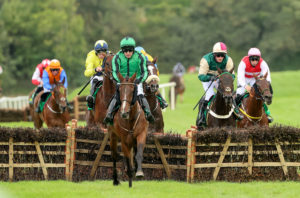 Despite the stiff opposition, Shark is sweet on Hewick.

“He won the Bet 365 Gold Cup (3m 4f). Maybe this is a little short for him but there is a lot of money involved and we have to try it. He is entitled to go for the big one up there.

“It is the one you would love to win but any race you win in Galway is special,” acknowledged Hanlon as he assessed Hewick’s chances. .

The Sandown winner is not the only horse in Hanlon’s yard which could give him a first placing at Ballybrit this week.

“Hallowed Star goes on Wednesday in a flat race  and also runs in a hurdle race on Sunday. He has to have a real chance both days he runs,” estimates Hanlon.

If there is an indicator here then the fact that he has Patrick Mullins on board on Wednesday must mean something.

“He is a horse which won last year and I hope he is in good form this year.”

Hallowed Star is back for a  maiden hurdle at the weekend while Ace Aussie is another whom Hanlon is sweet on.

“He is a nice horse which I bought in the sales recently and he goes in the hurdle on Saturday.”

The trainer himself is not staying in Galway all week. After racing on Wednesday, he will come home as he has no runners the following day.  For the moment he continues to hope and dream

“For me to win a Galway plate would leave me very happy. Hewick has a chance,” he says.

‘Shark’ on Corrie, the Cats, Christy Moore and ice-cream