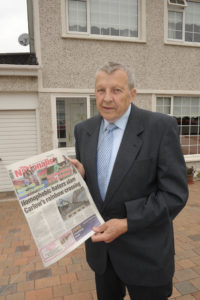 IT’S the end of an era for The Nationalist and Frank White as he pens his final Times Past column this week.

The Clonegal man has written for The Nationalist since around 1994, taking over the column from his late father Willie.

With Times Past, Frank wrote about various engaging historic stories, but in recent years he was singularly focused on the 1916-23 period to mark the centenary of the Easter Rising, War of Independence and the Civil War. In The Revolutionary Years, Frank has written a virtual week-on-week account of what happened during that time, while also penning featurettes on myriad luminaries.

It was all carefully researched, with Frank visiting locations of many fateful incidents, meeting local historians and reading locally-held papers along with carrying out research in the national archives.

Due to health reasons, Frank, who turns 78 this week, has decided to end the column after the completion of his comprehensive series on the Civil War.

Speaking about the epic task he undertook, Frank said: “It’s one of pride. I could cry. I would love to go on … to continue it from the end of the Civil War up to the formation of the republic. I have the history to do that, but I would not be able to put it together, it’s sad to say.”

Frank never found the task of documenting the revolutionary years overwhelming. His knowledge and grasp of that period allowed him to plan and write pieces months in advance of publication.

His ability to lay out the complex set of events and characters set him apart, his dedication extraordinary. He worked six days a week; he typically took Saturdays off except for All-Ireland weekends, when the former Carlow senior player and county championship winner would take the Sunday off instead.

It meant early starts and late nights, but Frank thrived on it.

“I’ll miss it,” he said. “I always looked forward to it, from the time I woke up in the morning. My wife Flora was a great supporter to me. If I went to Kerry in the morning, she’d have no objection.”

A former member of the defence forces who served in Chad and Beirut, Frank was also a PE teacher and was involved in rugby with Newbridge College. The father of three has lived in Newbridge for the past 40 years with Flora.

Frank’s interest in history goes back to when he was a child. It had been a long-standing desire to document the revolutionary period. He believed that many people simply do not know enough about what happened during this period, while the history curriculum in schools pertaining to those years has been limited for decades.

Frank travelled the length and breadth of the country in his research efforts because he wanted to write his own story.

“I wanted to be sure of everything. I didn’t want to write something that was a version of someone else’s. I wanted my own version of it. You could not research the period and not have an opinion on it,” he said.

Frank has a long-standing admiration for Arthur Griffiths, but in particular for Michael Collins. “He gave us our freedom … no doubt about it,” he said.

One of his favourite incidents to write about was the audacious Mountjoy prison break in 1921. Disguised as British officers, IRA men Paddy Daly and Emmet Dalton used a captured armoured car to gain access to Mountjoy in an effort to release leader Seán Mac Eoin, but they were rumbled and had to shoot their way out.

“There’s no army officer today that would attempt to do that to rescue one of their leaders. It was an outstanding attempt,” he said.

Frank’s articles have been shared across the world, including in academic circles. His articles also get a consistent readership online, years after publication.

It’s the end of an era for both Frank and The Nationalist. It was all driven by a noble attempt to document a volatile period,

“I always felt what I was writing was the truth, that was the main ambition,” concluded Frank.

Commenting on Frank’s long-standing contribution to the newspaper – and that of his father, Willie, before him –The Nationalist’s editor Conal O’Boyle said: “What Frank achieved in his Revolutionary Years columns was an outstanding piece of scholarly research. He made the history of this period accessible to new generations of readers, but he wore his learning lightly. His articles were never anything less than a good read.

“Frank’s father Willie began the popular Times Past column, where the subjects could range from local and national history to folklore and customs. Frank continued this tradition, before focusing on the fight for Irish freedom. The Nationalist owes both men an enormous debt of gratitude. The column will be sorely missed, but we wish Frank a long and happy retirement. He’s more than earned it.”