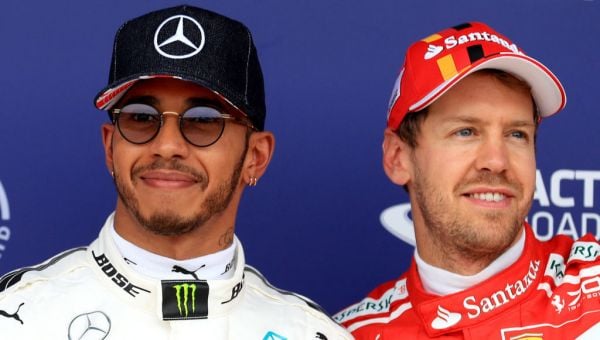 Lewis Hamilton praised Sebastian Vettel for standing by him in Formula One’s “lonely” world – before hailing the German as a great of the grid.

Four-time world champion Vettel, 35, announced on Thursday that he will retire from the sport at the end of the year.

“My goals have shifted from winning races and Championships to seeing my children grow, passing on my values and being able to learn from them.”

Vettel’s 53 victories place him third on the all-time list behind only Hamilton’s 103 triumphs and his hero Michael Schumacher, who won 91 times.

“My first feeling is that it is sad he is stopping,” said Hamilton ahead of this weekend’s Hungarian Grand Prix.

“The journey I have experienced in this sport, often feeling relatively lonely, Seb has been one of the few people that has made it not feel that way. He stood by me through a lot of things.

“We talk about legends, I don’t really like that title but he is one of the greatest people we have seen in this sport and we need more people like him. I am sad because I have lost an ally.”

Hamilton and Vettel both started their careers in 2007. But despite having two years on his one-time rival, Hamilton, 37, insists Vettel’s decision will not hasten his exit from the grid.

Seb, it’s been an honour to call you a competitor and an ever greater honour to call you my friend. Leaving this sport better than you found it is always the goal. I have no doubt that whatever comes next for you will be exciting, meaningful, and rewarding. Love you, man. pic.twitter.com/eHVmOpov2m

The seven-time world champion added: “It doesn’t make me think about my future, but it is a reminder that I am in that part of my career that people I came up with and have raced for so long will start to stop.

“Before you know it Fernando Alonso will not be here, and then who is there after that? I guess I will be the oldest.

“But I am thinking about how I can improve this car, what steps we need to take to get this team winning again, what is the road map to claiming another world championship, and what we need to do to have everyone in this sport more aligned, in terms of diversity.

“When I am talking about fuel in the tank, I am still fighting for all of those things. I still feel as though I have plenty to go. I don’t think I will go until I am completely burned out and have nothing left, but hopefully that is a while off.”

Vettel joined Ferrari in 2015 but failed to deliver the world championship and was effectively dumped by the Italian team after five seasons.

A move to Aston Martin to mark their return to the grid followed. But Vettel, 12th in the championship, could not be convinced to remain for another year, informing owner Lawrence Stroll of his decision on Wednesday, before making the news public in a four-minute Instagram video at midday on Thursday.

Vettel, who said he wanted to spend more time with his wife, Hanna, and three children, admitted in an appearance on BBC’s Question Time that he is a hypocrite for dovetailing F1 with his environmental crusade.

“It is one of the one of the factors that definitely played a role,” he said.

“I understand that part of my passion comes with things that I am not a fan of – travelling the world, racing cars, and literally burning resources. Once you see these things, you can’t unsee them.

“But for every sportsperson, the biggest challenge is waiting for us when we decide to do other things, and to be honest I am scared of what is coming because it might be a hole and I don’t know how deep that hole is and whether I will get out of it.

“I have lots of support and people who have helped me along the way. Hopefully I will make the right decision to progress and become a better version of myself in 10 years’ time.”