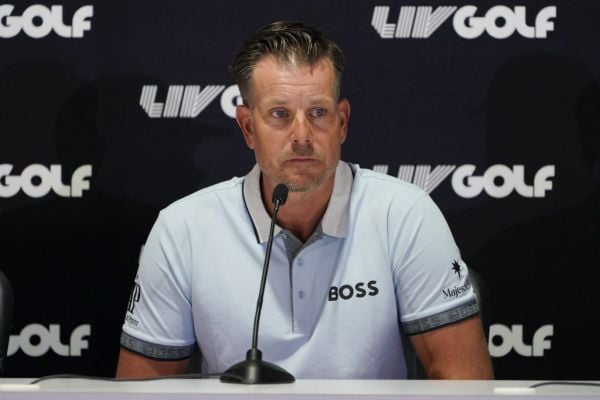 Henrik Stenson has reiterated his disappointment at losing the Ryder Cup captaincy amid reports that Luke Donald will lead Europe in Rome next year.

Stenson was appointed captain on March 15, but the Swede’s tenure lasted just 127 days before his decision to join the Saudi-backed LIV Golf series meant he was stripped of the role with immediate effect.

The former Open champion had hoped to be able to continue in the position while still playing in LIV events, but a meeting with Ryder Cup Europe officials made it clear that was not acceptable.

Speaking ahead of his debut at Trump National Golf Club in New Jersey, Stenson said: “I made every arrangement possible here to be able to fulfil my captain’s duties, and I’ve had great help here from LIV to be able to do that.

“And still, the decision was made that I was to be removed. I’m obviously disappointed over the situation. But it is what it is, and yeah, we move on from there now.”

Stenson refused to go into details of the contract he signed on his appointment as captain, when he stated he was “fully committed to the captaincy, Ryder Cup Europe and the job at hand”.

And the 46-year-old also declined to expand on what he meant by saying he accepted the decision to strip him of the captaincy “for now”, with team-mates Lee Westwood and Ian Poulter pointing out that qualifying criteria for the 2023 Ryder Cup had yet to be announced.

A statement from Ryder Cup Europe.

“On my statement last week, as you clearly have read, I just expect to be treated fairly going forward depending on what the outcomes are in this whole case,” Stenson said.

“And (it) is yet to be seen what decisions are to be made and when we will be notified of anything like the boys are saying here, qualification and vice captaincies and all the rest.

“So up until that point, we just wait for European Tour and Ryder Cup Europe to make those announcements.”

Asked about a report in The Telegraph that former world number one Donald would be appointed captain, Stenson said: “Well, that’s news to me.

“Obviously I’m not in the loop on these things at this point. I don’t feel like I should comment on that until that’s official news, if that were to be the case.”

It is understood an official announcement on Stenson’s replacement could be made on Monday.

DP World Tour members who played in the inaugural LIV Golf event were fined £100,000 and banned from competing in the Scottish Open.

However, following a hearing before Sport Resolutions (UK) days before play got under way at the Renaissance Club, Poulter, Adrian Otaegui and Justin Harding had the punishments temporarily stayed, pending determination of their substantive appeals.

“I’m still eligible to play on The European Tour (DP World Tour),” Westwood said on Thursday. “I don’t think I’ve been banned from playing any events.

“The BMW PGA Championship is still my next event at Wentworth. That’s an event, a qualifying event, for the European Ryder Cup team.

“No decision’s been made on qualification for the team, and my future or any of our futures playing the European Tour. So that leads me to believe that we’re still eligible to play in it.