Pat Deering reflects on some of Rathvilly’s best times

IN the recently released Across the Four Lakes Podcast, Rathvilly chairman, Pat Deering reflected on his club’s thought process as they approached the 2021 senior football final and how they overturned the result of the 2020 decider which had only taken place months previously because of the Covid pandemic.

“We came into the final as, obviously, underdogs, though we out in Rathvilly felt we were in a good place. We played the 2020 final in August. In fairness, Eire Og were the better team on the day but we felt we didn’t play particularly well. We felt we didn’t turn up on the day and we felt we had a lot more in the tank,” he said.

Deering said changes were made but there was never any doubt in Rathvilly minds that they could win.

“We had turned around, reviewed the situation from the August final and rectified the mistakes we felt we had made in August and we felt we had a great opportunity coming into the final in November 2021. We scored 2-12 in a county final against Éire Óg which was probably our biggest ever score in a county final against Éire Óg and were full value for our money. Nobody would dispute that on the day.” 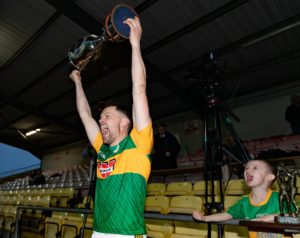 He agreed that players such as Brian Murphy, Brendan Murphy and Noel Doyle would all be in the best fifteen footballers ever to have worn the Rathvilly jersey but he opined that Lar Molloy from the 80s and 90 teams was the best of them all.

“In 1983 he played in that senior final at full-back (Rathvilly beat Éire Óg by 0-5 to 0-4 to win a first ever county senior final). He gave an exhibition. The previous year he played in the minor final against Bagenalstown. It wasn’t a particularly strong team but he was the centre-half back. From memory, we won that final by 1-3 to 0-1 on a terrible wet day. Lar Molloy scored 1-3. He was our only scorer from centre-half back. He went on to be an outstanding half-back. He went on to play in the forwards. In 84 (in Athy in the Leinster under 21 final) he gave an exhibition in a Leinster final playing against Dublin.

“My abiding memory of Lar  I think was in 1985. Carlow played Kerry in Carlow in the first round. Lar was playing centre half back against Pat Spillane. Pat was one of the greatest players of all time. Pat scored a point from half-forward and covered every blade of grass. Lar scored two points from half back. He had it all. He had  serious ability for a small man, to get up in the air to take the ball, take frees, find a man, never to get dispossessed.”

To hear the full interview tune in to the Across the Four Lakes Podcast on Apple podcasts, Spotify and other podcast platforms.