BY Sunday evening, we will know the make up of the 2022 JJ Kavanagh & Sons Senior Hurling Championship Final. Kieran Murphy looks ahead to this weekend’s semi-finals and gives his verdict on who will progress. 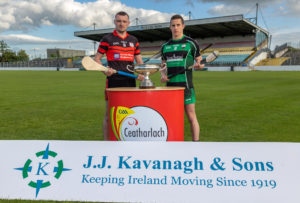 Since they won their first senior hurling championship back in 2006, the reigning champions, Mount Leinster Rangers have contested every county final bar 2014 when St Mullins beat Naomh Eoin. Before the football and hurling clubs amalgamated, Erins Own almost beat Rangers in 2009 but came up excruciatingly short when losing by 1-13 to 1-11. Three years later, Erins Own were back in another decider but this time Rangers won easily enough.

That is the history facing Bagenalstown Gaels now. Their manager, Gavin Nolan, acknowledges this too.

“We are looking forward. It is a massive opportunity for the club and the players trying to get to a county final. We are under no illusions. Rangers have been in the last 10-12 county finals so they know what it takes to win a semi-final. They are buffered with quality hurlers all over the field and have loads of experience. It will be a massive step for us but it is a massive opportunity for the club to get to its first county final since 2009. It will be a great test for our players coming up one of the best club teams in Carlow for many years now,” he says.

Bagenalstown were without a number of players when beaten by Ballinkillen in their last group game.

Craig Doyle has hamstring issues and the manager says it will be a big week in the recovery process for the former Carlow intercounty player. Alan Corcoran should make a return but the manager was delighted that Brian Doyle played for two thirds of the Ballinkillen game and came out of it well. Jamie Clarke is another who faces an anxious few days.

“We have 15 and will focus on the lads we have and hopefully we will give it a good rattle,” promises Nolan.

On the other hand, Rangers manager, Paul O’Brien, welcomes Jon Nolan, Ted Joyce and Garry Kelly back into contention for a semi-final place. In their absence younger players such as Donagh Murphy, Tadgh Doran and Ciaran Kavanagh got loads of game-time.

“We have given lads games over the course of the league stages. It is good to be going into the semi-final having given lads plenty of games,” the Dubliner suggests.

He goes on to say there are still performance issues to be addressed.

I suppose we set out to win all our games in the group stages. That is what we have done. “Over the course of the five games, we were happy with some things but other things we needed to address and improve on. The last two days out we were not good in the first half. Looking at Bagenalstown, if we are not good in the first half, we won’t get a chance to come back into the game,” O’Brien says.

It is hard to see Rangers lose here but the players on both sides know each other well. Many of the Bagenalstown players have a good record against Rangers at underage level. It is about transferring that confidence into senior grade. At some stage, Rangers will begin to start losing games but at the moment it is hard to see that happen here. 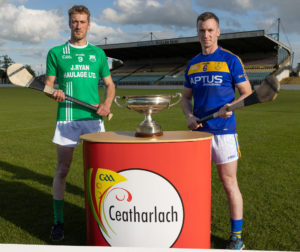 Eoin Larkin, the Ballinkillen manager, was satisfied with the performance of his charges as they toughed it out against Bagenalstown Gaels in the final group game on Saturday. It could have gone either way. Now they face St Mullins in the semi-final.

“We will digest this one. We didn’t make it last year so we are delighted now to be there and to take our chance. We have a full squad and hopefully we will have no injuries next week. It is always tough against Bagenalstown. A local derby,” says Larkin.

“We won’t fear them and we will respect them. They were not at full-strength the last time we met so this will be 50-50. Whoever plays best will win,” opines Larkin.

Maurice Aylward, the St Mullins manager, says he is facing into the unknown. He has long since accepted that Marty Kavanagh has gone to America for the summer and is not playing with his club this summer. James Doyle is only returning from honeymoon this week and in their second last group game, Ballinkillen beat the former county champions by 2-14 to 1-9.

“You saw what Ballinkillen did to us last week. We have a lot of road to make up.

We will have to get into the players heads that they were not as bad as it looked that day. A huge improvement is needed and I am sure that improvement will come.”

He says every club is bound to have niggly injuries and the Ballyhale man is fiercely critical of the championship format in Carlow.

“When you are playing every week with only one week’s break in six weeks, you are bound to have injuries. Niggly injuries. So will every other club. Is that the way a championship should be played,” he asks.

“There are players playing under 20, intermediate and senior all in a week. I find it difficult but I cannot believe the way things are rushed and rushed. It is hard on clubs who would not have a big panel.”

He will have to play the cards he has been dealt. Doyle back is a boost but the loss to Ballinkillen and the poor second performance against Rangers who came back from six points down to win well has surely damaged morale. Ballinkillen have to be favourites.