IT’s been a strange season in the JJ Kavanagh & Sons Junior Championship after a couple of withdrawals during the group stages but undoubtedly it’s the best two teams who have reached the final. Kieran Murphy gives his verdict on who will be celebrating on Friday evening. 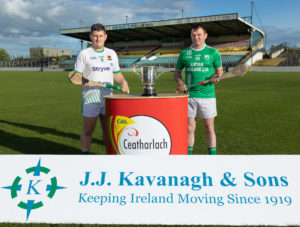 The two form teams in this year’s junior hurling championship meet in the final on Friday evening at Netwatch Cullen Park at 7.30pm. In round one of the group stages, St Mullins, travelled to Kilbride and came away with a hard-earned 0-15 to 0-12 victory.

It has been a disappointing championship with Carlow Town early drop-outs without playing a game while Palatine and Naomh Eoin struggled to field teams and eventually dropped out too.

It meant getting to a semi-final was a bloodless achievement for all four sides.

St Mullins won their semi-final in a game which was in doubt all week. Rangers were down a number of players so St Mullins will have learned little about themselves after their win against old foes.

Burren had to do a little grafting against Naomh Bríd but always looked like semi-final winners. They have a quality hurler in Dylan Townsend who knows exactly where the posts are. Oisin Doyle from Clonmore has been hard to stop and is good for two to three scores a game. Full-back, Jim Nolan, had a stormer in the semi-final and little got past him. He will have a tough job against the St Mullins forwards on Friday. Five of their starting forwards scored in their big win over Rangers in the semi-final while Declan Murphy, at midfield, picks off points from midfield.

It would be good for Carlow hurling if Burren were to take a junior hurling title but St Mullins have the firepower to break their hearts.