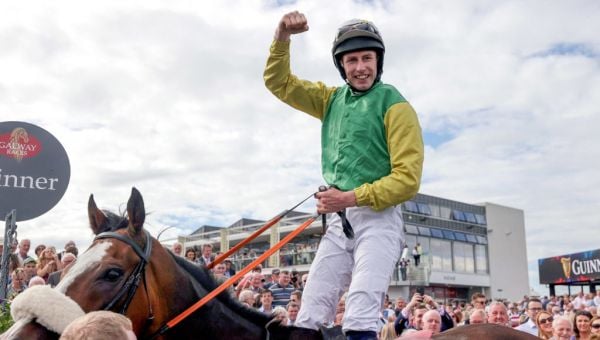 Conditional jockey Liam McKenna celebrated his biggest day in the saddle as Tudor City landed the Guinness Galway Hurdle Handicap at odds of 22-1.

Remarkably McKenna was having his first ride of the season aboard the 10-year-old, who first won the big handicap in 2019 and was giving trainer Tony Martin his fourth victory in the two-mile event since 2014.

Joseph O’Brien’s Prairie Dancer and Jessica Harrington’s The Very Man had led the field along at a frenetic pace for the majority of the typically competitive affair, but the complexion of the race changed as the field turned for home and both Jesse Evans and the John Breslin-owned Tudor City loomed up travelling smoothly.

It was Bryan Cooper and Jesse Evans who made the first move and headed the game Prairie Dancer jumping the last flight of hurdles, but McKenna timed his challenge to perfection aboard Tudor City and pounced inside the final furlong as the veteran became the only horse of a double-figure age to win this race since 1947.

“We’ve had a few great days here and this lad won it a few years ago and prior to that we’ve won it with Quick Jack and Thomas Edison,” said Martin.

“These are the races you love to win and target them a while out. Fortunately enough it has worked out for us a few times. It’s a great place to be, it’s great to be here and great to have the ammunition.

“I met John in America in 1985, he’s a great friend of my father’s and he’s looked after me since I was a nipper. Himself and his wife Debbie are two great people. We joined up in 2000.

“At that time he only came home for Galway and Leopardstown so you’d try to have the horses for those meetings, whenever he’d be home.

“He’s been home for the last couple of years and it makes it a little easier as we can go wherever we have to go with them, but the likes of this race is always a target from a long way out.

“It’s gone so competitive, but fortunately enough I have a few good men behind me still. If we get a few nice horses hopefully we can do the job with them.

“You could see a while ago that the horse was beginning to come to himself. He was coming in his coat, his skin, and you could see he was in rude health.

“We tried to have him as good as we could for today and it showed beforehand in the ring. He was mad alive and bold and active. He was getting a little warm which was a great sign and luckily enough he delivered.

“He seems to peak this time of year and his best runs are here. He handles the place and likes it, obviously.

Full of praise for the winning rider, Martin continued: “It was an incredible ride, a ride Ruby Walsh would have been proud of. We had a good chat about it on Sunday and Monday when we decided he would ride him and everything went so right for him. He gave him a cool patient ride and was excellent on him.

“I was afraid the pace they went that he wouldn’t get home from the last, but fortunately enough we did.

“He’s a right rider, most importantly he listens to you, and he knows them from home which is a big help.”

Breslin added: “I’m shaking with delight. I thought he’d run well, but the ride young Liam gave him was absolute perfection. He did everything he was told.

“The horse is a legend and it’s just fabulous.

Tudor City does it again! 🏆

Successful in 2019, the 10-year-old follows up in this year’s @GuinnessIreland Galway Hurdle Handicap under an excellent ride from Liam McKenna for trainer Tony Martin 👏 pic.twitter.com/4NGBJHT8K3