IF the group stages are anything to go by, the two JJ Kavanagh & Sons Intermediate semi-finals down for decision on Saturday evening should be very closely contested matches, Kieran Murphy gives his verdict on who will progress. 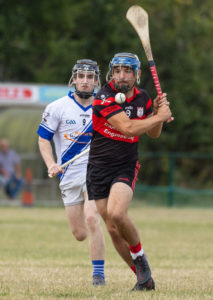 After losing to St Mullins after leading until the final seconds in their opening game of the championship, Rangers went through the rest of their group games unbeaten. In Brad and Ben Bolger they have two solid performers while Luke Roche’s strength and accuracy continues. Aging warriors, Willie Hickey and John Coady, contribute immensely at this level.

St Mullins looked all over winners in the opening minutes of their game against Bagenalstown Gaels as Jake Kelly scored 1-1. Then it all unravelled as the Gaels took over. Pierce Deegan scored a late goal and one would imagine St Mullins will need to score three-pointers if they are to repeat their first round victory.

The once powerful Naomh Eoin are facing challenging times with the seniors only winning one group game in the championship and failing to make the semi-final. Morale has to be low and they need something from the intermediate grade. These two sides played out a draw last week with Ciaran Abbey scoring nine points as the Myshall side hit back after trailing by 0-9 to 0-2 at one stage. Alan Whelan is the Bagenalstown go-to player. He scored 2-10 against St Mullins in a previous game and hit 0-6 against Naomh Eoin last time out. This is hard to call.