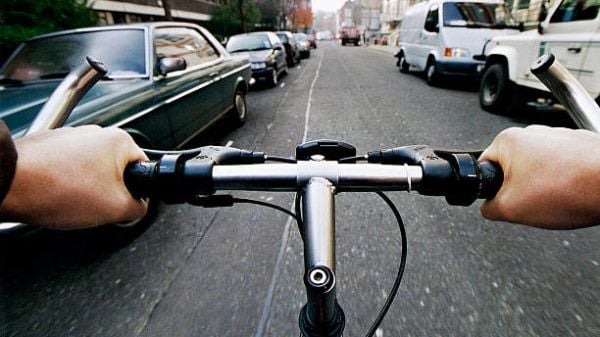 A cyclist who collided with a pedestrian causing him to suffer a bleed on the brain has been given an eighteen-month suspended sentence.

Keith Paget (39) was cycling at speed on the wrong side of the road and was undertaking a van when he hit the pedestrian.

Paget of Fairlawn Park, Finglas pleaded guilty to cycling in a dangerous manner in Finglas on September 29th, 2020.

Sentencing him on Friday, judge Martin Nolan said for some reasons that cannot be fathomed, Paget decided to undertake a vehicle on the wrong side of the road and did not see the pedestrian.

The judge said that a person cycling a bike must cycle in a safe way, even if a bicycle can cause much less harm than motorised vehicles such as cars, buses or articulated trucks. Judge Nolan said Paget had taken a chance and cycled recklessly as he did not know what was coming.

“Despite this reckless behaviour, I believe he does not deserve a custodial sentence,” Judge Nolan said. He suspended the eighteen-month sentence in full under strict conditions.

Paget has 34 previous convictions, the most recent from 2013, including 18 for road traffic offences.

Garda Joshua Graham gave evidence that he attended the scene of a collision between a cyclist and pedestrian at the junction of Barnham Drive and Wellmount Drive on the day in question.

The victim, who was 17 at the time, was crossing the road behind a white van, which had stopped at the junction to turn left.

Paget was cycling at speed on the wrong side of the road, and passed the van. He then collided with the pedestrian, who he did not see.

The collision caused the victim to hit his head on the ground. He suffered between five and ten seizures as a result and was taken to hospital, where he was treated in intensive care for a bleed on the brain. No victim impact statement was made.

Gardaí obtained CCTV and took statements from witnesses. Paget did not give a statement and was not interviewed by gardaí. A summons was issued for him to attend court.

Gda Graham agreed with Luigi Rea BL, defending, that Paget seemed disoriented and in shock at the scene.

Paget never intended to cause harm and had tried to help the victim, Mr Rea told the court.

He said his client had been on his way home to care for his animals when the accident occurred. He has two children, and his partner is pregnant.

Paget also suffered a serious brain injury following a fall at work, the court heard. Mr Rea said Paget accepts he should not have been cycling at that speed.