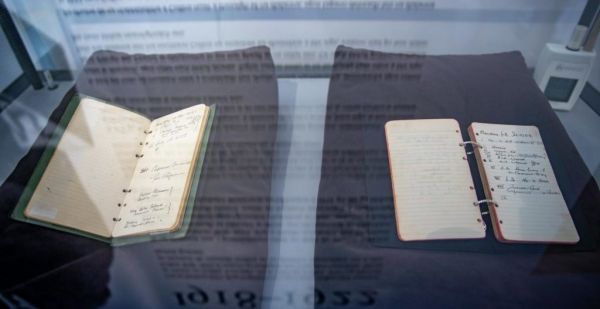 Michael Collins diaries, which cover the critical time period of 1918 to 1922, will go on display for the very first time at the Michael Collins House Museum in Clonakilty, Co Cork.

To mark the centenary of his death, the diaries were loaned to the National Archives by the descendants of Collins, the family of the late Liam and Betty Collins, Clonakilty, Cork.

They have undergone significant conservation and preservation treatment, archival processing and digitisation at the National Archives over recent months.

Visitors to the museum will be able to view all five diaries on a touchscreen device installed in the Michael Collins House Museum while the 1921 and 1922 diaries in physical form will go on public display for the month of August.

The Mayor of Cork, Cllr Danny Collins said that much has been written about Michael Collins over the last one hundred years, but there is something so special about seeing his actual words, written by his own hand on the pages of his diaries.

“I would like to congratulate Michael Collins House, the National Archives and the Collins family on coming together to make this possible. I hope the diaries will encourage people from far and wide to visit the museum and Clonakilty as well as inspiring people’s interest in history.”

Speaking at the unveiling event, Orlaith McBride, Director of the National Archives, said they are very proud to partner with Cork County Council to bring the diaries to the Michael Collins House Museum, Clonakilty for public display.

“In returning the diaries to the place of Collins’ youth, a place that shaped and formed the young revolutionary, we are introducing them to a wider public as an important new primary source material to further our understanding of this significant national figure.”

“My siblings and I are very pleased, on our father’s behalf, to place these precious diaries in the care of the National Archive and we are particularly happy to have them exhibited in our father’s hometown of Clonakilty.

“Our grand uncle Michael Collins lived an extraordinary life. The diaries will give the public a much greater understanding of this exceptional and courageous man.”

Admission to the exhibition is free and the Michael Collins House Museum will extend its opening hours throughout the month of August.

The diaries are presented as part of the Government of Ireland’s Decade of Centenaries 2012-2023 National Programme.