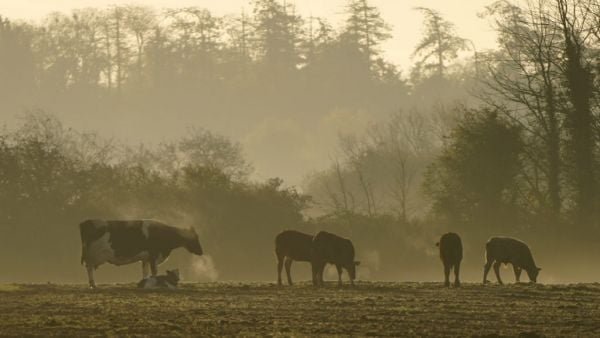 Climate experts have raised concerns about the emissions targets agreed by the Government for key sectors of the Irish economy, and that the 51 per cent overall reduction target would not be met by 2030.

It comes as Minister for Transport and the Environment Eamon Ryan emphasised that the Government’s “first priority is protecting the Irish family farm” and that there wouldn’t be a forced cut to the national herd.

The Government announced targets for emissions reductions in key sectors of the Irish economy on Thursday, after much wrangling between Mr Ryan, Agriculture Minister Charlie McConalogue and their officials in recent weeks over what level of cuts should be imposed on the agriculture sector.

In the end, a compromise rate of 25 per cent was chosen for agriculture out of a range of 22-30 per centt laid out in the National Climate Action Plan 2021.

“The fact that agreement was reached, because it didn’t look like that earlier in the week, is something to celebrate,” according to Professor Sadhbh O’Neill, a lecturer in climate policy and politics at DCU’s School of Law and Government.

“But anyone who’s following climate change and climate action and climate science knows that it still falls short of what we need to be doing,” she told the PA news agency.

“I’m just always concerned when I hear reference to measures that really tinker at the edges of what we need to be doing, instead of addressing head on the challenge of mitigation on both the land use and agricultural side and also with fossil fuel emissions.”

When asked about the pledge from Mr Ryan that the Government would not force farmers to reduce the national herd, she said: “I think we need to be more honest.

“I think there are going to have to be reductions. Our livestock sector is too big, it has the biggest impact on our greenhouse gas emissions profile.”

“Because it might ultimately save the taxpayer money in the long run if we confront this issue directly.”

The chair of the Climate Change Advisory Council, Marie Donnelly, said that though the Government’s emissions cuts plan was “an important milestone”, it was also “problematic for a number of reasons”.

One of the main issues raised by climate scientists was that the sectoral emissions ceilings announced come to a total reduction of 43 per cent, which falls short of the aim of reaching 51 per cent by 2030.

Ms Donnelly said that this was “not consistent” with the objective in the Climate Action and Low Carbon Development (Amendment) Act, which sets legally binding targets for Ireland to reduce its emissions.

Professor O’Neill said that they may be taking a “political inching forward step-by-step approach”.

“But unfortunately, the climate law… is very prescriptive as to how the emissions ceilings are supposed to be set.”

She said that it was possible that if the Government does not revise these targets and “fill in the blanks” it could be open to a Judicial Review.

Ms Donnelly raised another issue with the emissions ceilings for the land use sector not being announced, which she said “needs to be addressed urgently”.

The land use sector covers forests and bogs, both of which can over time absorb CO2, but are currently on track to be a source of emissions in Ireland due to low forestation rates and peaty soils being drained.

A reduction rate of 37-58 per cent was proposed for the land use and forestry sector in the Climate Action Plan, but the exact target was not mentioned in the Government’s announcement this week.

When asked why this may not have been announced, Professor O’Neill said: “I’m not really sure why they didn’t include them.

“It seems as though there’s possibly a revision of the methodologies but at the same time there’s also a study being undertaken about land use in Ireland to try to ascertain where we should be putting forestry and where we should be doing certain types of agriculture,” she said, adding that this figure could be announced after the study is published.

Responding to the gap between the 51 per cent and 43 per cent figure, Minister Ryan told reporters at Government Buildings on Thursday that the Government “would be best” following what it called “the Danish model”.

“They set ambitious targets, and they recognise that the scale of change requires you to learn by doing,” he said.

“It is perfectly feasible and correct to put aside where there is an area where you have to learn, where you have to improve your scientific and technical knowledge, that you put that into an unallocated savings box, and then as you learn, you close that [gap].”

Agriculture Minister Charlie McConalogue added: “The science is evolving here too: if we’d been talking a couple of years ago, the capacity around feed additives to contribute wouldn’t have been developed the way it is now.

“Our understanding around how we can use genetics to improve emissions profiles in animals, that wouldn’t be there.

“The technology around low-emissions slurry spreading is something we have developed and validated nationally here around Johnstown Castle [research centre] and we’re significantly investing further.

“And I have no doubt that ask we go forward, year on year, that we will see significant progress around the tools available to us as well.”

Professor O’Neill said “The reality is here, we’re working within the bounds of physics, and carbon dioxide removal is very expensive and very, very difficult to scale up in any way.

“So our best bet is the known technology.

“And the known technology is mitigation, it’s energy efficiency, it’s reducing our use of energy and fossil fuels, replacing them with renewables, scaling that up on a massive scale.

“There is no quick technological fix, and the targets we’ve set are really very urgent, they don’t leave any room for waiting for a new technology to be either available or to be affordable.

“So we have to work with what’s already out there, what’s proven, and what’s the least cost and most efficient.

“And the least cost, most efficient measures have been worked out – on the energy side and on the land use and agricultural side – it’s just that politicians won’t step up and implement them. We all know what we have to do.”

Ms Donnelly added: “Whilst these targets are a useful starting point, the targets will need to be revised upwards and monitored closely in the light of experience.

“The Climate Action Plan 2023, due later this year, will need to set out the precise actions and steps that will need to be followed in order to align with the ambition of the Carbon Budgets which were adopted by the Oireachtas in April.”

Mr Ryan said there would be extra supports needed to encourage Irish farmers to diversify from the beef and dairy sectors.

“I don’t believe the current system actually pays and benefits a lot of family farms.

“I don’t believe it gives a really good income to encourage a lot of young people to go into farming and forestry and managing our land. So this change, I think, is going to be good.”