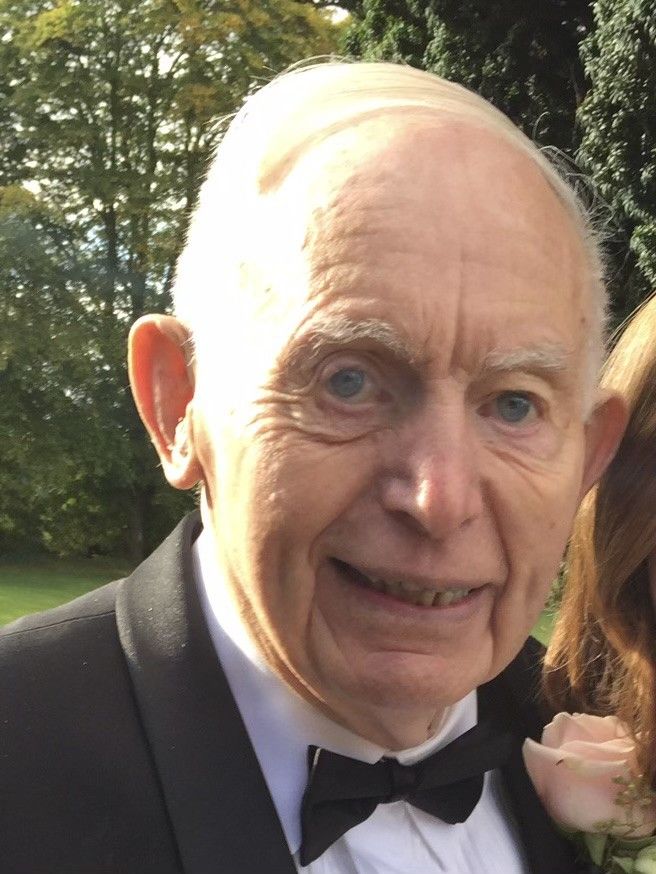 PATRICK (Paddy) McDonald, The Hermitage, Tullow, Co Carlow, whose death occurred peacefully on Sunday 26 June in the company of his loving family, was a well-known and highly regarded veterinary surgeon in the Tullow/Carlow region.

A native of Tullow, Paddy was born on 23 March 1931. The life of Paddy McDonald was recounted in great detail during a heartfelt tribute by his son Brendan during Paddy’s requiem Mass in his local Church of the Most Holy Rosary, Tullow on Tuesday morning, 28 June.

A spiritual man, the church in Tullow is where Paddy McDonald worshipped all his life.

Brendan told the congregation that his dad was the eldest of seven children, his siblings being Betty, Thérèse, Theo, Larry, John and Donal.

“Daddy went to Tullow National School and later to Knockbeg College, which he attended just after World War II; his mother brought him over and back on the pony and trap. When asked of his memories of Knockbeg, Dad would invariably refer to the quality of the food (or lack thereof) and describe what he said was ‘the world’s worst porridge’.”

Brendan said his father went on to study veterinary science in UCD, and when he graduated in 1954 he remarkably become the first of four brothers to become vets, after his own dad, who was also a vet in Tullow.

“Dad spent one year as a lecturer in the Veterinary College on Merrion Road and then went on to have practice placements in Wexford, Newry and Naas.

“It was around the age of 25 that Paddy contracted TB which, at that time was a life-threatening illness. He spent 15 months in Peamount (where daughter Stephanie now works), which was then a TB sanitorium, and for a while the outlook was grave. TB was highly contagious at the time and there was quite a stigma attached to it. But around that time, Streptomycin was introduced and it saved Dad and TB lost its grip on the country.

“Shortly after his brush with TB, and we assume with a renewed sense of vigour, Paddy embarked on the dating scene. With the help of his sister Betty, he met Anna Owens at a rugby dance in Carlow, where the famous Clipper Carlton Showband was playing. Paddy and Anna hit it off and they were married in Donnybrook Church in October 1963 and settled into The Hermitage on Tullow Hill, where they went on to have six children – Anne-Marie, Stephanie, Thomas, Brendan, Susan and Conor.”

“Outside of veterinary, Dad had a keen interest in rugby. He was a regular visitor to the Blackgates (home of Tullow RFC) and also to Lansdowne Road, to watch the Irish rugby team. Some of his and Mammy’s happiest memories were trips abroad with friends like John and Diana Gibson and Michael and Una Donnelly, to Murrayfield, Twickenham and one memorable Lions trip to Australia in 2001 with Betty and Vincent Grogan.

“It always filled Daddy with pride to see Seán O’Brien, a fellow Ardristan man, play so successfully for Ireland and the Lions. He would also be delighted to see the recent developments at the Blackgates.

“Dad also had a passion for golf, especially with his brothers Larry, John and Donal and Barry McHugh in Carlow Golf Club and we were always happy to see him relax on those Sunday afternoons as he headed off with a belly full of roast beef and a Bounty bar.”

Brendan said Paddy had reluctantly retired from veterinary at “the young age of 83”. As he settled into retirement, his interests were tending to the garden in The Hermitage, trips to Rosslare and spending family time with his children and their partners Jim, Rob, Judy, Marion, Tomás and Genevieve and his 13 beautiful grandchildren.

“Dad’s faith was very important to him and he was very proud of his brother Mgr John McDonald. He truly believed in an afterlife and was looking forward to meeting up with his mother and father and Theo and Betty when the time came. Daddy, I know you’re happy up there.”

His other great love was, of course, his beloved wife Anne. Brendan stated: “Theirs was a deep love and it showed itself throughout their 59 years of marriage, but most notably in Dad’s latter years, when his health started to fail.

“Mam’s love, which was both practical and compassionate, shone through as she stepped into the role of Dad’s main carer. Dad nearly slipped away from us almost two years ago and was, in fact, sent home from hospital to spend his last few days at home in The Hermitage. But with the exceptional care and attention of Mammy and a host of carers, he slowly recovered much of his strength and character.

“We are all deeply grateful to every carer who continuously amazed us with their compassion, hard work and humour. Sometimes the roars of laughter that we could hear as the carers tended to Dad was incredible and you would wonder if there was a sick person in the house at all.

“The last two years having Dad at home were a great gift to all the family and gave us all, especially his grandchildren, the opportunity to share his wisdom, humour and positive outlook on life.”

Paddy had suffered a fall about a month before his passing, and despite his best efforts, it was a battle too far for him and he slipped away very peacefully on 26 June.

The family’s tribute concluded: “Daddy, we are happy for you and we are heartbroken. You are no longer in this world, but you will always be in our hearts. We love you.”

Earlier, speaking on behalf of the McDonald family, Brendan thanked Mgr McDonald and Fr Maguire for celebrating Paddy’s requiem Mass. He also thanked Gina Hanley for her beautiful singing of hymns during Mass, and to Caroline for assisting her, and for all the people who called to offer their sympathies at the McDonald home the previous day.

Readings at Mass were by Tom and Conor McDonald (sons), while Prayers of the Faithful were recited by Anna Rooney (granddaughter).

The Offertory gifts were brought forward by Eibhlín McDonald and Elsa Jones.

Following Mass, Paddy was laid to rest in St Patrick’s Cemetery, Tullow, with Mgr McDonald reciting the final prayers at the graveside.

The Month’s Mind Mass for Paddy McDonald took place on Sunday 24 July in the Church of the Most Holy Rosary.