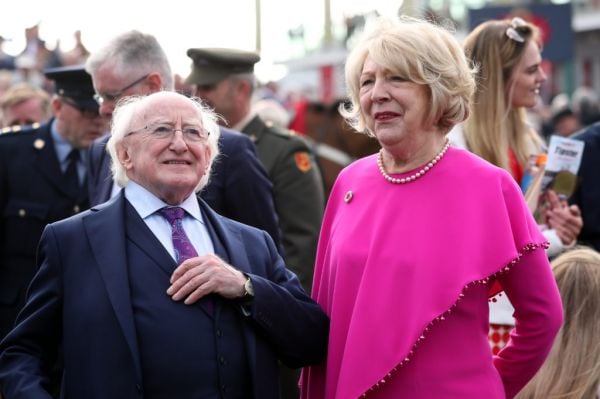 President Michael D Higgins has been urged to make a statement on the war in Ukraine after his wife penned a controversial letter on the conflict.

President Higgins has faced calls to state support for the Ukrainian cause and voice opposition to Russian aggression.

It comes after Sabina Higgins wrote a letter to the Irish Times during the week about the war.

Mrs Higgins’ letter, the purpose of which was to criticise a previous editorial on the conflict, said the fighting would go on until the world “persuades President Vladimir Putin of Russia and President Volodymyr Zelenskiy of Ukraine to agree to a ceasefire and negotiations”.

Critics of the letter have suggested Mrs Higgins was drawing an equivalence in the actions of Ukraine and Russia.

Senators from parties in Ireland’s coalition government have voiced concern.

Fianna Fáil senator Malcolm Byrne said the letter was subsequently published on the President of Ireland’s official website – a move he described as “appalling”.

The letter appears to have been since removed from the website.

“Mrs Higgins is entitled to her personal opinion and to express it, although I believe that she is totally wrong to try to see an equivalence in the positions of Ukraine and Russia,” Mr Byrne said.

“However, the decision to publish the letter on the President’s website raises serious questions.

“It is incumbent on the President of Ireland to now express clearly the strong support of the people of Ireland for the people of Ukraine and that we hold Russia responsible for the war and ongoing barbarism.

“Ireland should rightly be proud of our response to the invasion of Ukraine.”

Ireland strongly supports the people of #Ukraine . We must continue to call out Russian aggression.

While Sabina Higgins is entitled to her personal view, as expressed to @IrishTimes , I completely disagree with it.

“Sabina Higgins’s letter was inappropriate, unhelpful and distasteful,” he tweeted.

“Her views are entirely out of touch with those of the Irish people and interventions like this are seen as a tacit endorsement of the Russian regime.”

The office of the President has been contacted for comment.