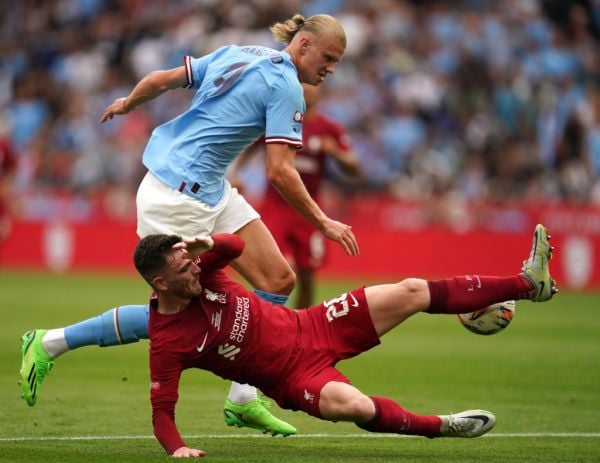 Trent Alexander-Arnold, Mohamed Salah and Darwin Nunez were on target for Jurgen Klopp’s side.

The match was played away from Wembley due to the Women’s Euros final taking place there tomorrow.

The Portugal captain had earlier responded to comments about his future with “Sunday, the king plays” on Instagram.

Ronaldo’s understood to be pushing for a move away from Old Trafford, having missed all of pre-season so far.

United insist he’s not for sale.

Derry City have booked their spot in the next round of the FAI Cup.

The Candystripes beat non league Oliver Bond FC by 7-0 in their first round clash.

Niall Kearney has signed for a level-par third-round 72 at The Hero Open.

It leaves the Dubliner on 10 under par into tomorrow’s final round in Scotland.

David Carey shot a 4 over par round of 76 today, leaving him back on 2 under.

Sean Crocker has a 2 shot lead out on course at 18 under par.

Stephanie Meadow has moved up the leaderboard after shooting a round of 71 on day three of the Scottish Women’s Open.

That moves her up to three under par for the tournament and into a tie for 47th.

Lydia Ko and Celine Boutier share a two shot advantage at the summit of the leaderboard at 15 under par.

The Mercedes driver finished ahead of Carlos Sainz and his Ferrari teammate Charles Leclerc.

Galway star footballer Shane Walsh is reportedly changing his club allegiances to Dublin ahead of the upcoming championships.

The Irish Independent are reporting the All-Ireland finalist is seeking a transfer from his home club of Kilkerrin/Clonberne to Dublin’s reigning football county champions, Kilmacud Crokes.

The forward is studying to become a PE teacher in the capital and is set to make the switch before the Senior Championships get underway next weekend.

Kilkerrin chairman Ian Hynes said they are devastated by the news and that the club will “fight this all the way”.

Tomas Ó Sé is now not expected to be the new Offaly senior football manager.

The Mirror reports the Kerry legend has pulled out of the running to succeed John Maughan following a change in work circumstances.

The five-time All-Ireland winner had been part of Maughan’s backroom team last season and was in line to take over for next season.

At the penultimate day of the Galway Festival, Rachael Blackmore took the feature race, the Boylesports Handicap Hurdle.

The Tipperary native was on board the Shark Hanlon trained Hallowed Star at a price of 8/1. The 16/1 shot Happy Jacky was second while Mars Harper was third for Gordon Elliott.

Meanwhile, the McDonogh Capital Investments Handicap was won by the 8/1 chance Aqwaam for Ian Williams and Seamie Heffernan.