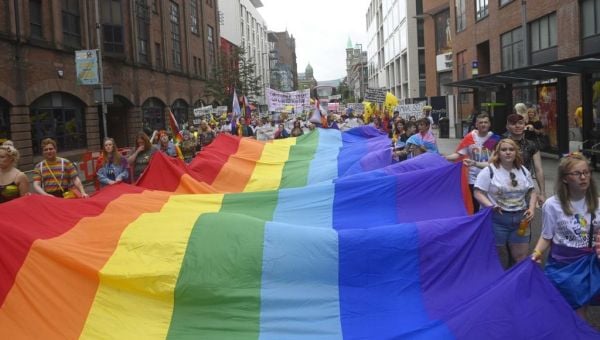 Thousands of people lined the streets of Belfast as the city’s Pride parade returned for the first time in three years.

Organisers said the Pride parade was the biggest one ever held in Belfast, with the number of groups taking part in the colourful procession up significantly on the last staging in 2019.

The theme for the event was “community united in diversity” and a group of asylum seekers and refugees who have made Belfast their home were invited to lead the noisy march on its route through the city centre.

Three years ago, 135 groups registered to take part in the parade.

There was a carnival atmosphere in the city centre as the rain stayed away until the end of the parade.

Officers from the PSNI and An Garda Síochána took part in the parade, walking together with representatives from British forces including South Wales, West Mercia, Derbyshire and the British Transport Police.

Ulster Rugby also took part this year, with fly half Ian Madigan among those parading through the city. Players from the Belfast Azlans, a predominantly gay rugby club, also joined the parade.

The GAA was also well represented, with Ulster GAA taking part along with several clubs, including East Belfast GAA.

Co-chairman of the Belfast Pride Festival Cara McCann said pent-up excitement was a factor in the large numbers taking part in the parade’s return.

“People are fed up sitting at home the last couple of years and I think that’s why we have increased numbers today,” she said.

“But also I think Pride has increased generally and people just want to take part in it.”

Ms McCann said it was remarkable how much the event had grown across three decades.

“I think the first brief dander was over 30 years ago with less than 100 people in that small walk and at those times it was a really nerve-wracking thing to do, and it was very, very brave for the people who went before us for that first ever Pride.

“It has grown globally but it has grown locally as well to a massive size.”

A ban on same-sex marriage was lifted in Northern Ireland at the start of 2020, just before the pandemic hit, so Saturday’s Pride parade was the first in the city since that historic law change.

“We’re really excited to have the opportunity to celebrate the introduction of equal marriage, something we haven’t been able to do over the last three years,” he said.

“So there’s so much to celebrate today.

“But there’s also a lot of campaigning we still need to do to ensure that we have full equality for our community.”

A small group of religious protesters demonstrated against the Pride event outside Belfast City Hall as the parade passed by.