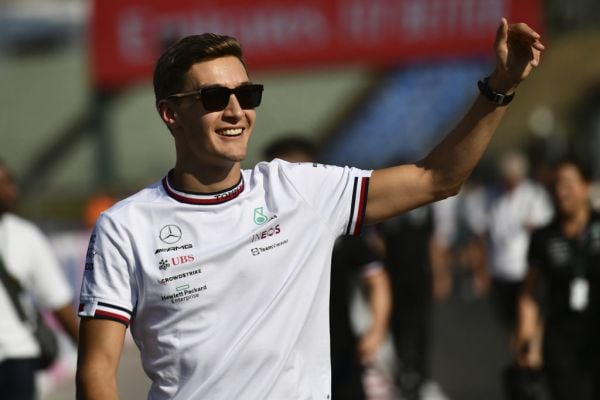 Mercedes boss Toto Wolff hailed George Russell as a champion of the future after he delivered a spellbinding lap to claim his first pole position for the Hungarian Grand Prix.

Russell, the 24-year-old from Norfolk, tore up the sport’s form book – edging out Ferrari’s Carlos Sainz by just 0.044 seconds – to become only the fifth British driver this century to take top spot in qualifying.

Unbelievable job from the whole team to take us from our toughest Friday to our best Saturday together so far. YES TEAM!! 👊 pic.twitter.com/gYh3JDVVD3

In the other silver car, Hamilton could manage only seventh – his afternoon blighted by a DRS failure – with Russell taking the honour of securing Mercedes’ first pole of a troubled campaign for the grid’s once all-conquering team.

“George is a champion in the making,” said Wolff. “He was a champion in all of the junior categories – in Formula Two and Formula Three as a rookie – and we would never have put him in a Mercedes if he didn’t believe that he could be a future world champion.

“It is his first pole position and that will always be something special for him, and for us, because it is a moment to remember. Today is another milestone of the many he is going to achieve.”

Mercedes appeared to be staring down the barrel of another poor weekend after they were left trailing in practice.

But Russell will be in prime spot to take his maiden win in Sunday’s 70-lap race at a track which has been kind to British drivers over the years.

Hamilton has a record eight wins at the Hungaroring while Button took his first F1 victory, at his 113th attempt, here in 2006. Nigel Mansell wrapped up his sole title triumph at the Hungarian Grand Prix 30 years ago. Russell himself scored his first points for former team Williams at this race last year.

“Come on, woohoo, come on, yes, you beauty, you beauty,” he said over the radio, unable to hide his delight at his landmark achievement.

“Yesterday was probably our toughest Friday of the whole season,” he said later. “We were all here until 11pm last night scratching our heads.

“Our morale was pretty down and we felt lost, so to come back and to get pole position 24 hours later is such a feeling because I know what we went through last night.

“This is what racing is all about. This is why I wake up every single day. I want to be world champion because a feeling like this is something you can’t really dream of.”

“There are no points for qualifying but getting this result for all of us is pretty huge. We are behind the curve at the moment but we will be absolutely going for it and victory is what we are fighting for.”

Russell will have the Ferrari duo of Sainz and Charles Leclerc, who starts third, snapping at his heels. Lando Norris qualified fourth for McLaren, while Max Verstappen, who heads Leclerc by 63 points heading into the final round before the summer break, will start 10th after he lost power in qualifying.

“I am hopefully not planning to defend and that we will drive off into the sunset,” said Russell with a wry smile. “But I know the guys around me and even Max will not make it easy.

“Budapest is a circuit I have always loved. I have always been fast here and I knew if the car and myself were working perfectly together there was no reason why we couldn’t achieve great things.

“I will get a good night’s sleep and focus everything for tomorrow.”