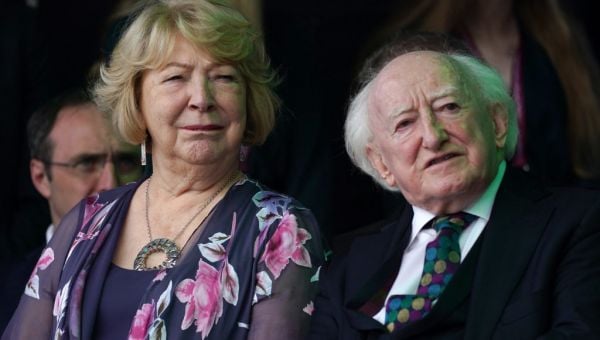 A Social Democrats TD has called on the President to clarify why his wife’s letter on Ukraine went up on his website.

Gary Gannon said he does not think Sabina Higgins’ call for Ukraine and Russia to agree a peace deal are reflective of the Irish people’s views.

She wrote to The Irish Times calling on both sides to enter negotiations and her statement has since been taken down from the President’s site.

Mr Gannon said although Mrs Higgins has a right to her views, Ukraine isn’t on a level playing field to Russia.

He told Newstalk: “While I respect Sabina Higgins as an important voice on issues of social justice, what we can’t step away from is there is only one aggressor here and that’s Russia and Vladimir Putin.

“We can’t expect, as the letter stated, Volodymyr Zelenskiy and Vladimir Putin to be on the same terms. There’s no equilibrium here. One country has been invaded, that’s Ukraine.”

Mr Gannon said President Michael D Higgins must now clarify where he stands on his wife’s statement being posted on the presidential website.

“I think it’s important that President Michael D Higgins, or indeed his office, clarifies exactly why that particular statement went up on the presidential website, the reasons it was taken down, and that they clarify what their position is in that regard.”

Senator and former specialist army ranger Gerard Craughwell said president Zelenskiy is well within his rights to fight back, while his citizens are being slaughtered.

You can’t call for negotiations while a gun is being held to the head of one of the participants in a conflict.

He said Ukraine cannot sit down to negotiate a peace deal with Russia “while bombs are falling on her citizens”.

“You can’t call for negotiations while a gun is being held to the head of one of the participants in a conflict. Mr Zelenskiy and his cabinet will decide when, and if, they wish to negotiate a peace treaty.

“Right now bombs are falling in all of southern Ukraine and right into the capital Kyiv, now is not a time when you should be calling on anybody to negotiate.”

Discussing the letter on Saturday, Ukrainian MP Kira Rudik said: “I wouldn’t call it naive, I would call it underinformed because when you look at the way how Russia behaved for the last eight years – when you look at the last five and a half months – you would understand that there is no way of peaceful negotiations.”