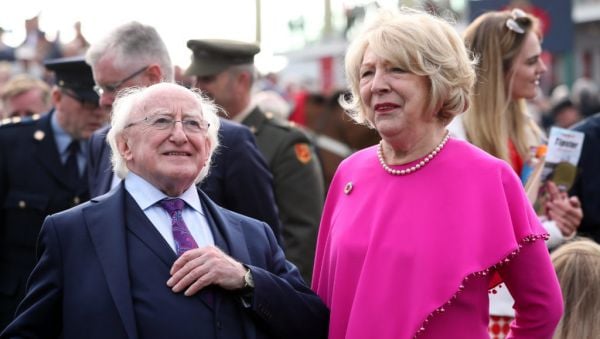 A Fine Gael senator says the President still needs to answer basic questions about a letter his wife sent to the Irish Times on the war in Ukraine.

Sabina Higgins’ letter to the Editor called for Russia and Ukraine to engage in peace talks.

The letter was also published to the President’s official website for a period last week but was later removed.

President Higgins yesterday released a statement reiterating his support for the people of Ukraine.

“We are now five days into the controversy. Hiding under a rock and ignoring the media is not going to make this go away.”

“This would all have been wrapped up if the President answered the basic questions.

Mr McGahon said if he answered those questions it would be resolved, but instead there has been “total and utter silence”.

Yesterday, a Social Democrats TD called on the President to clarify why his wife’s letter on Ukraine went up on his website also.

Gary Gannon said he does not think Sabina Higgins’ call for Ukraine and Russia to agree a peace deal are reflective of the Irish people’s views.

Mr Gannon said, although Mrs Higgins has a right to her views, Ukraine isn’t on a level playing field to Russia.

He told Newstalk: “While I respect Sabina Higgins as an important voice on issues of social justice, what we can’t step away from is there is only one aggressor here and that’s Russia and Vladimir Putin.

“We can’t expect, as the letter stated, Volodymyr Zelenskiy and Vladimir Putin to be on the same terms. There’s no equilibrium here. One country has been invaded, that’s Ukraine.”

Mr Gannon said President Michael D Higgins must now clarify where he stands on his wife’s statement being posted on the presidential website.

Pedestrian killed in collision with car in Co Galway