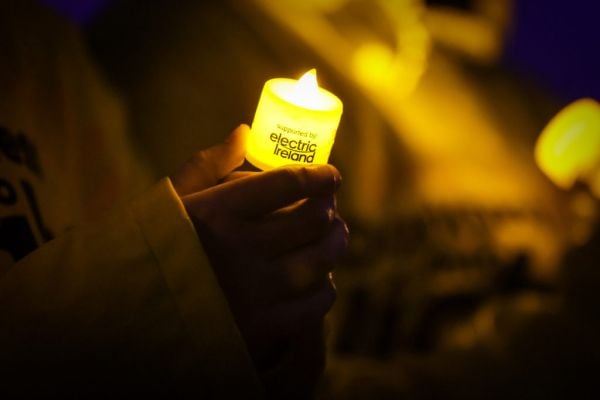 Funds raised this year by suicide prevention and support charity Pieta from its flagship event, Darkness Into Light, have plunged 56 per cent on the record €8.6 million raised last year.

This year was the first year that Pieta could stage an in-person, ‘live’ Darkness Into Light event in cities, towns and villages across Ireland and beyond since 2019 due to the lifting of Covid-19 restrictions with almost 120,000 people across 14 different countries coming together for the walk this year.

However, funds raised by Pieta from Darkness Into Light this year plunged by 56 per cent to €3.8 million.

The €3.8 million raised is €4.8 million down on the record amount of €8.6 million raised in 2021 when Covid-19 restrictions meant that tens of thousands of people could not gather across the country and in overseas locations for the charity walk.

The €8.6 million raised from the 2021 Darkness Into Sunrise appeal contributed to the charity’s best ever financial performance where last year it generated a record €20.7 million in income.

The strong financial performance across 2021 and 2020 represented a major turnaround in the charity’s finances as in the year prior to Covid-19, the charity was loss-making.

Last year, Pieta delivered over 48,000 hours of suicide intervention and bereavement counselling with almost 60 per cent of clients presenting to Pieta are aged between 13-25.

Asked why there was such a drop in ‘Darkness into Light’ this year, a spokeswoman for Pieta said that last year the charity raised over €20 million thanks to the overall generosity of the public “but the reality is that raising funds in 2022 is a challenge for all not-for-profit organisations and not just for Pieta”.

The spokeswoman pointed out that public fundraising is vital to Pieta as it contributes to over 80 per cent of our revenue.

She said: “The ongoing support and dedication of Pieta supporters means we can continue to provide free, life-saving services in 20 locations across Ireland and over video to those who cannot make a face-to-face appointment.”

The charity’s spend on promoting, organising and other costs associated with staging Darkness Into Light last year totalled €1.56 million.

Confirming that the €8.6 million was a record figure for Darkness into Light, the spokeswoman said: “The response to our ‘One Sunrise Together’ appeal was incredible. We are extremely grateful to the public for their generous donations.

In addition to the €8.6 million raised from Darkness Into Light last year, Pieta raised a further €9.38 million from “donations and legacies”.

The strong performance across 2021 and 2020 has greatly strengthened the charity’s balance sheet with total funds of €19.36 million at the end of December.

Numbers employed by the charity last year increased from 219 to 256 as recruitment “continued at pace” and staff costs increased from €7.43 million to €8.5 million.

A note attached to the accounts states that because of the very intensive nature of the suicide intervention service and to safeguard therapists, the charity is subject to weekly limits on contact hours.

The note states that to address demand in 2021, the charity also contracted an average of 26 contract therapists throughout the year to each deliver typically 12 therapy hours per week.