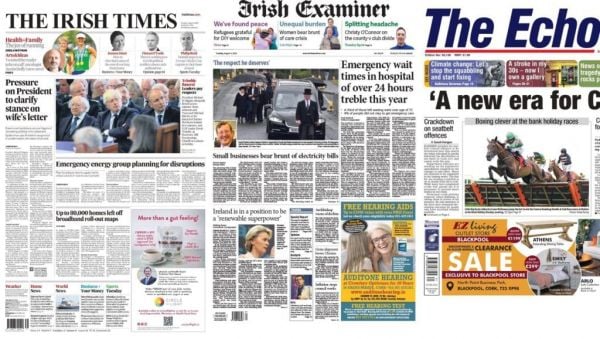 Tuesday’s front pages focus on David Trimble’s funeral and the deadlock in Stormont as well as pressure mounting on President Micheal D Higgins to clarify his stance on his wife’s letter regarding the situation in Ukraine.

The Irish Times reports that pressure from politicians is mounting on president Higgins after a statement he released in relation to his wife’s letter on Ukraine was seen as not sufficient. 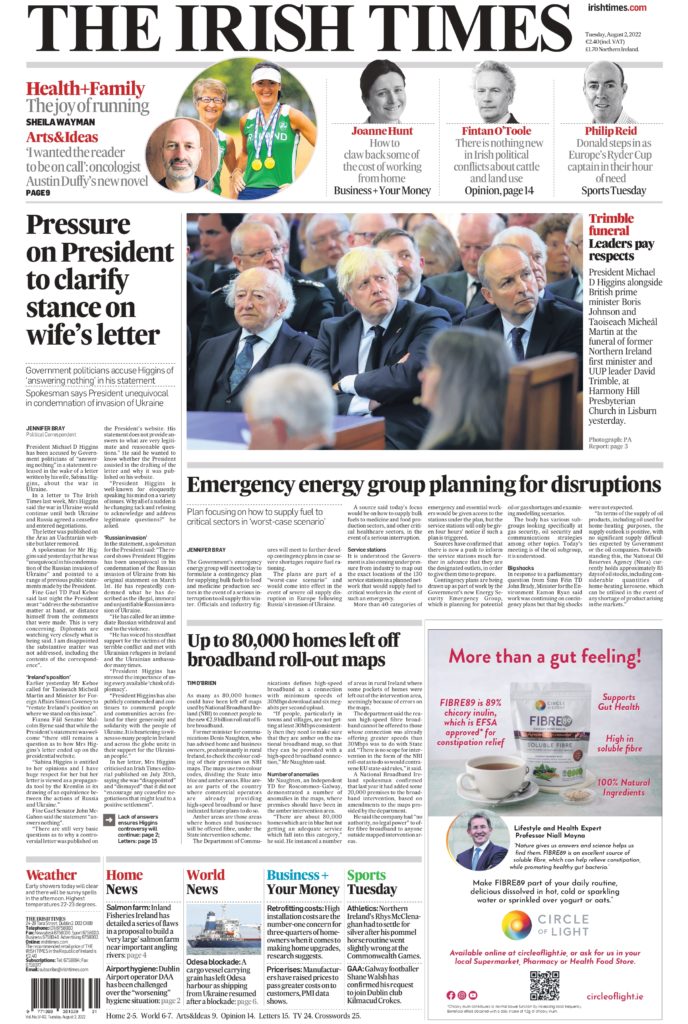 The Irish Examiner lead with a piece about the amount of people waiting over 24 hours in hospital A&E departments has trebled in the first five months of the year. 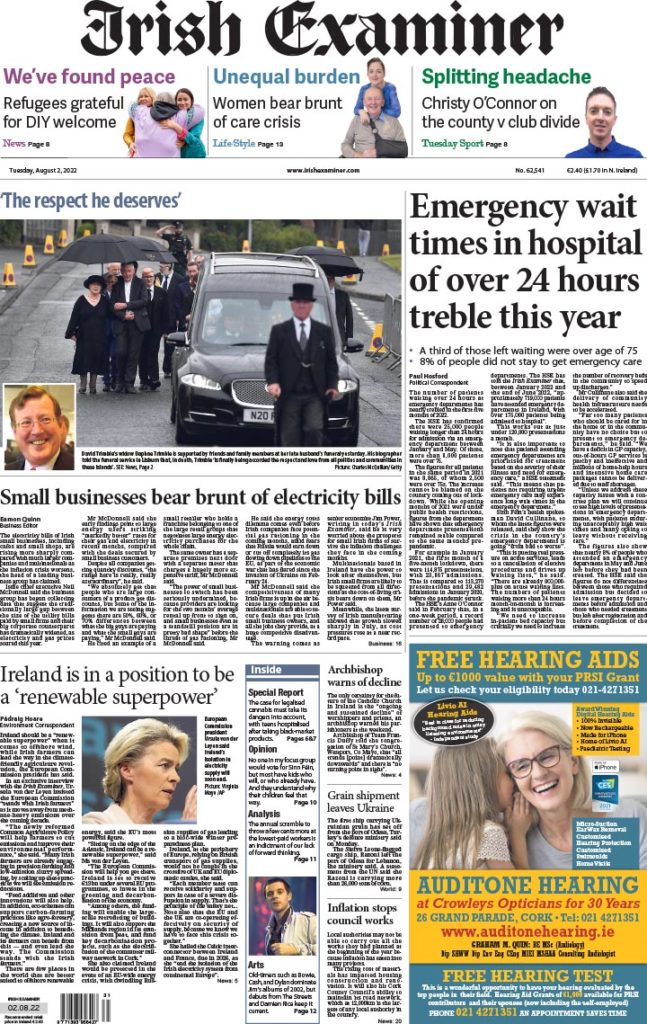 The Echo focus on ‘a new era’ for Cork city as plans for the redevelopment of the city’s South Docks have been granted conditional planning permission. 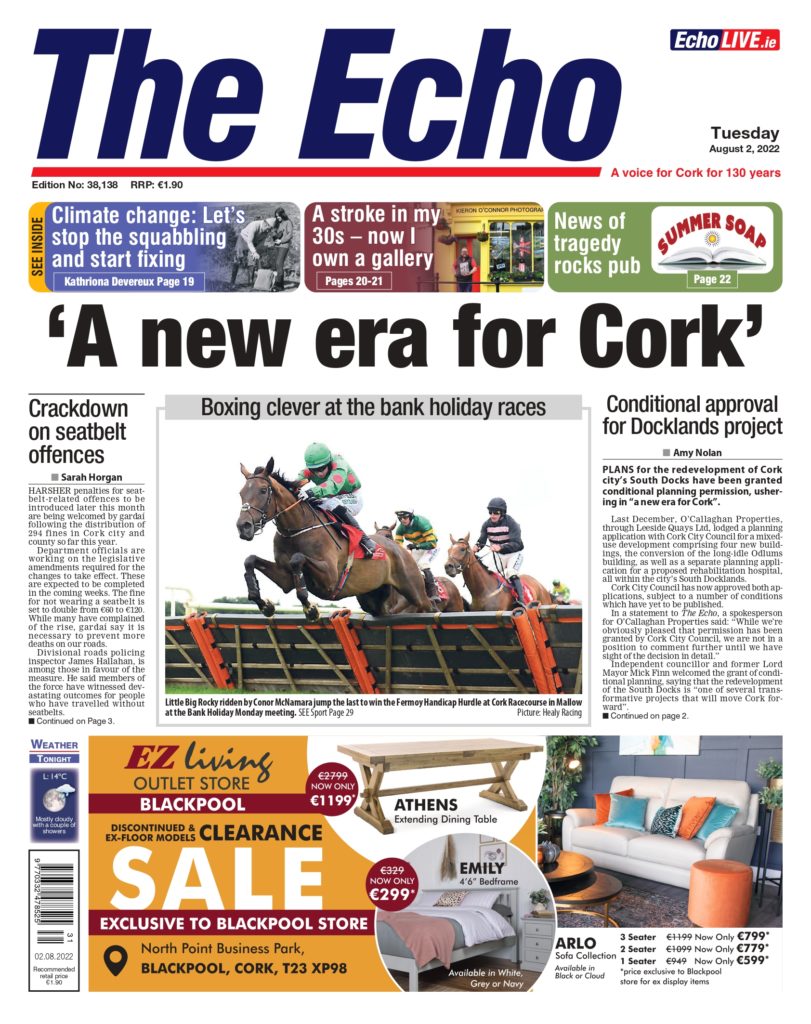 The Irish Sun lead with a piece about the victims of alleged scammer Catriona Casey saying she is lying about being labelled the ‘fall guy’ for €400,000 being swindled.

The Irish Daily Mirror focus on Sinn Féin TD Kathleen Funchion who has had to move back in with her parents to save money for a deposit for a home.

The Belfast Telegraph lead with a piece calling for politicians in Northern Ireland to sort out the Protocol issues at the funeral of one of the architects of the Good Friday Agreement, David Trimble.

Morning, readers. Stay with @BelTel for all your breaking news. Here’s a look at the front page of the Belfast Telegraph this morning.

To read the full newspaper on your device, go Premium + ➡️ https://t.co/1JEC5mNi73 pic.twitter.com/w5YxJuBwEf

The Irish Daily Mail lead with a piece about contracts being given to hotels and B&Bs to house Ukrainian refugees worth nearly €100 million,

For all the big news and sport, plus your brilliant Good Health pullout, pick up a copy of Tuesday’s Irish Daily Mail, or click on https://t.co/wKUyK4A9A5 pic.twitter.com/iKEOfs03OO

Meanwhile, in the UK England’s Euro victory party continues across the mastheads, while Liz Truss continues her run to No 10 with a surprise endorsement.

The Daily Mirror says there have been calls for the “brilliant” team to be given honours, while Metro hails the “Dancing Queens” for fronting up to Trafalgar Square after partying all night.

🔴 Lionesses party with fans a day after Euro 2022 win#tomorrowspaperstoday pic.twitter.com/ySGCUP1sNc

Opening goal-scorer Ella Toone is quoted by The Guardian as calling for fans to get along to support Women’s Super League games.

Shifting to politics where The Daily Telegraph reports trade minister Penny Mordaunt has made a surprise return to the Tory leadership race with an endorsement of former rival Liz Truss.

‘Truss is the candidate of hope, declares Mordaunt’#TomorrowsPapersToday

The Daily Express has the UK Foreign Secretary pitching herself as the “real deal” on tax cuts, with the Tory leadership frontrunner telling the Daily Mail she will abandon plans to ban unhealthy buy-one-get-one-free offers.

The Independent reports Ms Truss has revealed plans to cut pay for public sector workers – including teachers and nurses – outside the wealthy south east to save £11 billion.

An anonymous friend of Boris Johnson tells the i the Prime Minister blames the 2019 intake of Conservative MPs for contributing to his downfall.

British Airways has suspended ticket sales for short-haul flights from Heathrow until Monday, according to The Times.

The Financial Times says the speaker of the US House of Representatives, Nancy Pelosi, plans to meet Taiwan President Tsai Ing-wen during a controversial visit which has attracted China’s ire.

And the Daily Star reports a beer-loving pony who was made ceremonial mayor of his Devon village has been barred from his local pub.