IT may not quite be the Midas touch but there is something about Croke Park and Mark Brennan. The former Naomh Bríd and Old Leighlin senior player has won county titles with his clubs but he captained Carlow when they beat Down in the 2009 Christy Ring cup final, was manager of the Carlow camogie team which won a premier junior title in 2016 and is coach with the Meath senior ladies who have won back to back All-Ireland titles by beating Kerry by 3-10 to 1-7 at Headquarters on Sunday. 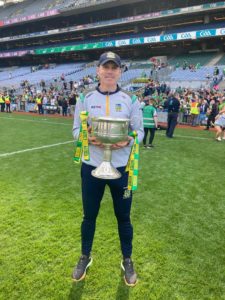 On Sunday, he had plenty of backing from his native county who travelled in support of one of their own.

“It was great. I turned off my phone on Saturday and when I turned it on there was over 100 messages from Carlow, Old Leighlin and Naomh Bríd people. A load of buses from Old Leighlin were up today and hopefully they can take a bit of inspiration from it,” revealed Mark.

On Sunday, Meath were supreme and when asked questions by an early Kerry goal they provided the answers.

“It is equally if not more (satisfying) than last year. To go back to back and for a team like ours to come out of nowhere, the easy thing would have been to fall back into the pack,” acknowledged Mark.

“Maybe people took us for granted last year but everyone knew who we were this year. Everyone watched a lot of our games so to be able to still perform and get to the end was pretty sweet,” he added.

Last year, Meath needed two late goals and a marginal refereeing call  to overcome Cork in the semi-final after the Rebels were awarded a kickable free but time was up. Brennan says these things happen.

“You need decisions. You are never going to be a straight-line curve to winning. There are going to be moments throughout the year where you need little things to go your way. We definitely had that last year and even this year there were big moments for players.

When you look at some of the points the girls got against Galway when Galway had all the momentum. We were there to stem that and go back down the pitch with seconds left.”

Here, Marie O’Shaughnessy picked up a yellow card at half-time and with just over ten minutes left, star-player, Vikki Wall, also spent the remainder of the game on the line.

“The sin-bin when we played almost the entire second half with fourteen players against a really well-coached team like Donegal. They were big wins, big moments,” acknowledged Brennan.

In the final, Kerry hit the holders scoring 1-2 in the early stages. Brennan was not altogether surprised with that.

There was no panic with the Royals.

“We have our systems and give the opposition the respect they deserve. We gave Kerry that respect.”

Emma Troy’s goal left only one in it and Meath were back. Kerry still persisted but the holders led 1-8 to 1-5 at half-time.

Kerry stayed close to their rivals in the third quarter but three-pointers from Niamh O’Sullivan and Bridgetta Lynch on 45 and 48 minutes broke the Kingdom’s resolve.

“The second half was less stressful,” admitted Mark who admits he won’t be returning to his home near DCU for a day or so. Is he now a Meath man?

“I don’t know. After this week, I think I will have to buy a blazer. I won’t be going home for a while,” he laughed.

Brennan was the only Carlow link to the final. Former Carlow team-mates Leah Mullins and Marion Hayden were the lineswomen for the game.