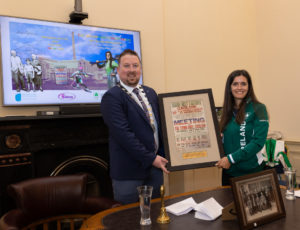 Tess’s grandfather, father of her mother Marguerite, is Francis Neerman, born in Carlow Town in 1944, and he is the son of Auguste and Alida Neerman from Ghent in Belgium. Auguste worked for the Belgium company Lippens who built the Carlow Sugar Factory in 1926. Auguste was one of the senior staff who came from Belgium in 1925 to set up the Carlow Sugar Factory. From 1939 to 1949 he was the Factory Manager, one of the most prestigious jobs in the country at that time.

Cllr O’Donoghue said “Tess joins the pantheon of County Carlow athletics that have represented Ireland at the Olympics’, rower Sean Drea, on the track: TJ Kearns and Marcus Lalor and in equestrian Sam Watson. At the ’84 games in Los Angeles, P L Curran was the Chef de Mission and he spent his career in the Carlow Sugar Factory. Tess has the distinction of being the first Irish female competitor in a speed skiing event and she is also County Carlow’s first Winter Olympian and our first female Olympian. I congratulation Tess on her wonderful achievements. I greatly admire her tenacity, bravery and resolute desire to be an Olympian.”

Tess said that “it is amazing to be here, really nice to reconnect with my Irish roots from Carlow, such an honour, and I didn’t know that my family had such a big impact on Carlow’.

Tess’s mother Marguerite, who was in attendance with Tess’s father, Jean-Max, says that she spotted a song written on the walls opposite Carlow Cathedral and that the title sums up Tess perfectly as an athletic, ‘Sweet as Sugar and Strong as Stone’. She explained that it is “such a surprise to see everyone here to welcome us home, for me it is even more emotional because my family history has been hidden for a while, our Irish roots were in Carlow but my Carlow born father died when I was ten so there was a whole chapter that was gone” 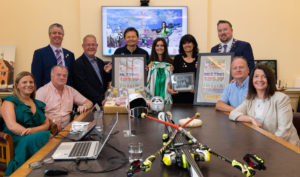 Just over ninety seventy years ago, on Friday 24 July 1925, the Town Hall and Haymarket area played host to an important public meeting held here to publicly demonstrate that Carlow was the place to build the new sugar factory. The poster for the meeting, which was printed by the Carlow Nationalist, is on display in our County Museum. The Irish government has at that time decided, following sugar beet trails, to establish a sugar factory. The government sought a lead partner from Europe as Ireland has no expertise in sugar production. The Government chose the Belgium company Lippens. Soon it became clear that Lippens preferred choice was to locate the factory somewhere in the Barrow Valley. Over the course of the Spring and Summer of 1925 the people of County Carlow and surrounding areas through our civic and religious leaders began a campaign to ensure that Carlow would be the chosen site for the factory to be built. Hence the famous meeting in July 1925, at which Mr Schurmans, Lippens representative, attended and spoke.

From photographs in Carlow County Museum Auguste Neerman was here in Carlow by September 1925 and by that December Lippens had chosen Carlow as the base for their factory and had set up their initial offices in the then Clubhouse Hotel at Courtplace. For ten years from 1939 to 1949 Auguste Neerman was the Manager of the Carlow Sugar Factory. This would have been without doubt one of the most important positions of industry not only in Carlow but in Ireland.

Their son Paul, with his scientific background also worked for a time in the Carlow Factory and married local woman Sally Keogh. While their daughters, Nancy and Juliette were involved in life in Carlow, Juliette was for a period the Secretary of the Carlow Lawn Tennis Club and in December 1945 played a cello solo in St Fiacc’s Hall, Graiguecullen at the first concert of the Orchestra and St Fiacc’s Choir.

Nancy acted in the very first Carlow Little Theatre production in 1945. Their first play, The Whip Hand, saw Nancy play the part of Berney Regan and according to the Nationalist review, she “… gave a most convincing performance…she has a very clear and effortless speaking voice… she was very well cast and played her role to perfection”.

In attendance at the Town Hall was Ms. Nancy Chillingworth, the Olympic Federation of Ireland Chef de Mission for the Winter Olympic Games in Beijing. She said “Tess is a bit special, as well as being an amazing athletic Tess is a super teammate. It’s really important to her to complete for Ireland and to be a member of Team Ireland and you can see it in how she supports her teammates when they were completing”.

While not in attendance, Tess’s grandmother, Nicole Neerman, widow of Francis, through the Cathaoirleach, sent a message to be read out at the event in the Town Hall. She stated “I want you to be assured of my presence in mind and heart during the marvellous celebrations organised today in honour of my granddaughter Tess. I regret not being able to attend today but I need to tell her and her mother Marguerite how much I am proud of them”.

The visit was coordinated by Carlow County Museum who arranged a tour of the Museum, a site visit to the factory site and to the location of Belville, the house the Neerman family lied in. The Arbez also visited the Carlow Sports Partnership basketball summer camp in Tyndall College and presented the participants with Irish Olympic pins. Bishop Denis Nulty welcomed them to the Cathedral where on April 1st, 1944 Francis Neerman was baptised.

Carlow County Museum asked Tess if she would like to present something from her Olympic journey to the Museum. Tess proudly presented her ski suit and ski equipment from the 2018 PyeongChang Games. Over the coming months these will be displayed in the Museum. Tess said, “it is really great to put these in the Museum for the Sugar Factory display, so we can see all the connections between the Sugar Factory and Alpine skiing”.

Tess and her parents, Jean-Max and Marguerite, were presented with a replica of the Sugar Factory poster form the Museum along with a Carlow Tourism hamper of Carlow produce that they can enjoy as the tour a