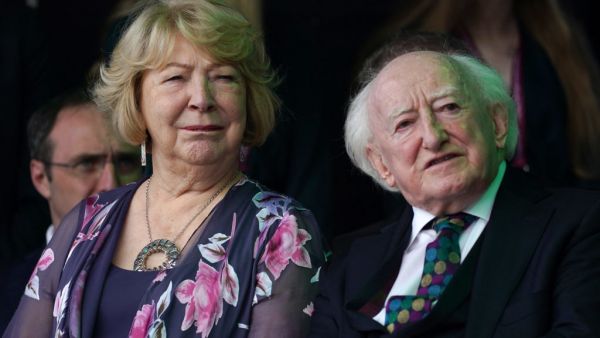 Taoiseach Micheál Martin has said the controversy over a letter about the Ukraine conflict written by the President’s wife has not caused embarrassment for the Government.

Mr Martin said Sabina Higgins has clarified the matter after she issued a statement in defence of the letter which critics claimed drew an equivalence between the actions of Russia and Ukraine.

Mrs Higgins, the wife of President Michael D Higgins, condemned Russia’s illegal invasion of Ukraine and said she was “dismayed” at the criticism she has received in recent days.

Mr Martin said Ireland is a democracy and people are entitled to their own viewpoints, and everyone agrees on the need for peace in Ukraine.

Mrs Higgins wrote a letter to the Irish Times last week to criticise an editorial on the conflict.

The letter said the fighting would go on until the world “persuades president Vladimir Putin of Russia and president Volodymyr Zelensky of Ukraine to agree to a ceasefire and negotiations”.

Government senators and commentators criticised Mrs Higgins for the letter, which was also published on the president’s official website, before being removed a short time later.

Asked if the matter had caused embarrassment for the parties involved, Mr Martin said it had not.

“I think the president, to be fair, also reiterated his strong condemnation of the Russia invasion of Ukraine,” Mr Martin added.

“The Irish Government’s position has been consistent from the outset, and remains the position that the invasion is both illegal and immoral and was a terrible act against the people of Ukraine.

“We live in a democracy too, and we have to be conscious people are entitled to their viewpoints. I think we are all agreed on the need for peace, so there’s no argument there.

“The spouse of a president may go to a particular opening or a adopt a particular cause for the benefit of communities so that has been happening for some time. That informal practice has built up over the years.”

The Fianna Fáil leader said he did not speak to Mr Higgins about this issue.

“I think in my view, it’s time to move on from it now,” Mr Martin added.

“I visited Kyiv myself and met people whose families were very affected by the terror of the war and the crimes that were committed in terms of the murdering of innocent civilians.

“The towns I visited had no military installations.

“Our position, along with others in the European Union, is unequivocal, that Russia should withdraw to a minimum to the positions before the war started.

“Many efforts were made by European leaders to get Vladimir Putin to deter him from starting the war in the first instance.

“There were many engagements with him. Unfortunately he has a imperialist 19th-century view of life and he resolved to invade Ukraine and he did.

“The Government’s view is that Russia has to stop the violence, stop the war and withdraw from the territories that it is now occupying.

“The fundamental point is that I don’t think anyone is in any doubt of the Irish Government’s position. I don’t think the Ukrainian government is.”