Jet makes emergency landing in Shannon after ‘fumes in the cabin’ 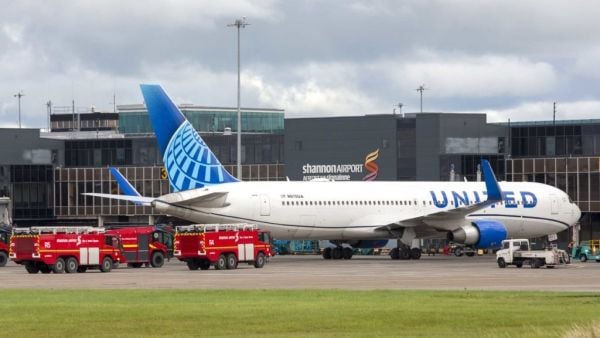 A transatlantic passenger jet has made an emergency landing at Shannon Airport this evening after the crew reported “fumes in the cabin”.

United Airlines flight UA-941 was travelling from Heathrow Airport in London to Newark, New Jersey in the United States at the time.

At around 5.30pm, while the flight was about 100 kms northwest of Mayo, the flight crew declared an emergency and advised air traffic controllers they wished the divert to Shannon Airport. The crew had been in contact with the airline’s dispatch centre to discuss a course of action for the emergency divert. It was decided that Shannon was the best option for the aircraft to divert to.

On the ground in Shannon emergency procedures were put in place. This involved alerting the HSE, National Ambulance Service, local authority fire service and An Garda Síochána. Units of the Clare County Fire and Rescue Service from Shannon and Ennis were dispatched to the airport along with ambulance paramedics and gardaí.

The flight crew also advised air traffic controllers that they would be making an overweight landing and would require the full length of Shannon’s runway. At almost 3.2kms in length, the runway at Shannon is the longest in Ireland.

The flight landed safely at 6.04pm and was met by airport and local authority fire crews which had been dispatched to holding points along the runway. After the jet touched down, it was pursued along the runway by emergency crews. It had been feared that the jet’s braking system could overheat in the emergency landing.

After landing, the flight crew confirmed that undercarriage temperatures were normal however the jet was accompanied to the terminal by fire crews as a precaution. Fire officers used thermal imaging cameras to inspect the undercarriage to ensure it had not overheated.

Engineers were standing by to investigate the cause of the suspected fumes on board.

One passenger quipped on Twitter: “Who’s got two thumbs and is on a plane that just made an emergency landing into Shannon Ireland because something weird (maybe smoke) was smelled in the cabin? This guy.”