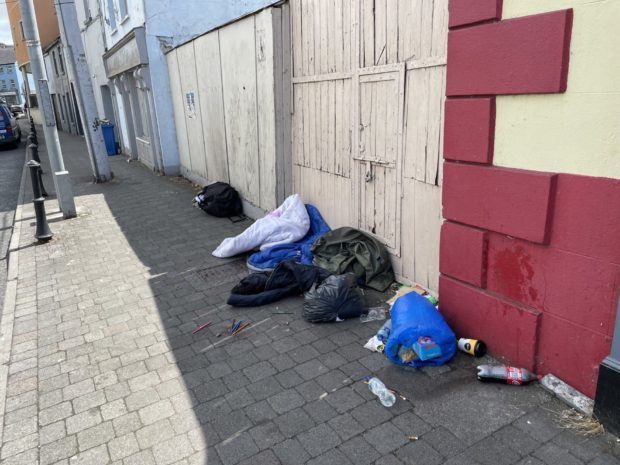 A YOUNG man living on the streets of Carlow has been offered accommodation, according to Carlow County Council. The man has been sleeping in doorways and footpaths in recent weeks in Carlow town.

Keith, a 34-year-old, says he wants accommodation but has not received any firm offers. He said he was given accommodation in Carlow for one night, but was asked to leave.

Speaking to The Nationalist last week, Keith said he came to Carlow to escape Dublin and get away from “bad people”.

Keith says he feels safe in Carlow and people have been good to him here. He spends his days in Carlow walking, sitting outside premises and listening to music on his headphones. In recent weeks he has been staying in doorways and on footpaths on Tullow Street and Castle Hill. Keith says he was moved from one location where he had been sleeping. He has received charity from locals, while he has attended the St Clare’s Food Kitchen.

Talking to Keith, it is clear that he has challenges. However, he appreciates the situation he is in and the difficulty in getting secure, safe accommodation. Keith says he has been living on the streets for the past eight years.

“The hardest thing about being on the street is being taken in,” he said. “I truly would like to have my own apartment … getting a job, getting back on my feet. I have a good CV, used to work in Carphone Warehouse.”

Keith said he has not received a firm offer of accommodation.

“I keep on getting told I will be looked at,” he said.

Keith’s circumstances, along with another individual in difficulty, were highlighted at a recent meeting of Carlow Joint Policing (JPC) Committee.

Raising the matter, cllr John Pender wondered what could be done to assist them. “I don’t know who is going to come to these people’s aid. As a society, we can’t be seen to stand idly by. It’s sad to see.”

Garda Superintendent Aidan Brennan did not wish to speak publicly about an individual case, but was aware of it. “It’s something we have given a lot of attention to over the last couple of weeks. We’ve liaised with our colleagues in the county council and the homeless service as well.”

At the JPC meeting, it appeared there was some doubt and confusion over which agency had ultimate responsibility for Keith.

Cllr Fergal Browne proposed referring the matter to the council’s housing strategic policy committee (SPC) to ascertain their housing or medical needs. “There should be a clear, stepped approach of who is in charge, otherwise this could go on months or years,” he said.

SPC chairperson cllr Arthur McDonald said that more than 25 agencies were operating in Carlow and one of them must have responsibility.

However, deputy Jennifer Murnane O’Connor doubted if there was an established framework for such a case. The Carlow TD added that she had contacted a government department to find out who had responsibility. “We have to have joined-up thinking from the gardaí to the council. That is not happening,” she said.