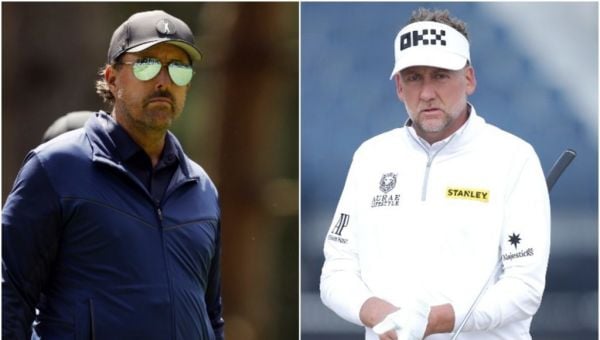 Phil Mickelson and Ian Poulter are among 11 LIV Golf players who have filed an antitrust lawsuit against the PGA Tour to challenge their suspensions in the latest battle in golf’s civil war.

The group includes three players – Talor Gooch, Hudson Swafford and Matt Jones – who are seeking a temporary restraining order to allow them to compete in the FedEx Cup play-offs, which get under way next week.

The complaint also claims Mickelson was suspended for two months on March 22 for “attempting to recruit players” to LIV Golf and has since had that ban extended until March 31, 2024 as a result of playing the LIV events in London and Portland.

Bryson DeChambeau, Abraham Ancer, Carlos Ortiz, Pat Perez, Jason Kokrak and Peter Uihlein are the other players putting their names to the suit, arguing that the PGA Tour is trying to hurt their careers.

“The Tour’s conduct serves no purpose other than to cause harm to players and foreclose the entry of the first meaningful competitive threat the Tour has faced in decades,” the lawsuit, which was filed in ​​the US District Court for the Northern District of California, states.

“The purpose of this action is to strike down the PGA Tour’s anticompetitive rules and practices that prevent these independent-contractor golfers from playing when and where they choose.”

In response, the PGA Tour released a memo written to players by commissioner Jay Monahan in which he described the 11 players as former colleagues who have “walked away from the Tour” and were now “Saudi Golf League employees”.

“We have been preparing to protect our membership and contest this latest attempt to disrupt our Tour, and you should be confident in the legal merits of our position,” Monahan wrote.

“With the Saudi Golf League on hiatus, they’re trying to use lawyers to force their way into competition alongside our members in good standing. It’s an attempt to use the Tour platform to promote themselves and to freeride on your benefits and efforts.

“To allow re-entry into our events compromises the Tour and the competition, to the detriment of our organization, our players, our partners and our fans. The lawsuit they have filed somehow expects us to believe the opposite, which is why we intend to make our case clearly and vigorously.

“This is your Tour, built on the foundation that we work together for the good and growth of the organization…and then you reap the rewards. It seems your former colleagues have forgotten one important aspect of that equation.”

Poulter was one of three DP World Tour members who successfully gained a temporary stay of their suspensions from July’s Scottish Open, pending determination of their substantive appeals.

The players had also been fined £100,000 for competing in the first LIV Golf event in June after being turned down for the required releases.

“If the LIV guys sue and are allowed to play on the PGA Tour, the players are enough fed up with it,” Love said in a press conference ahead of the Wyndham Championship.

“We understand that we make the rules on the PGA Tour and the commissioner is enforcing our rules and we don’t want those guys playing, coming and cherry-picking our tournaments.

“We hold all the cards. We say to the FTC (Federal Trade Commission) and to Washington, ‘No, we support the rules. We don’t want those guys playing. We don’t care what the courts say’.

“The nuclear option is to say ‘Fine, if they have to play in our events we just won’t play’.”

Being suspended by the PGA Tour means players such as Dustin Johnson, Brooks Koepka and Patrick Reed cannot represent the United States in September’s Presidents Cup, when Love will captain the side.

“I told the players that I’ve talked to that have gone or thinking about going, it’s your decision and you do what’s right for you, but understand (the) consequences,” Love added.

“I tried to sound like my dad and I probably wasn’t very good at it. I didn’t argue. I said you can be Tiger Woods or you can be banned from the game, take your pick.

Quite the group of captain’s assistants for @Love3d.

“But understanding the consequences, you signed up for these rules. I had to commit by last Friday or I don’t get to play this week. I have to play 15 tournaments or I don’t get to vote and I don’t get my retirement money. You have rules that you have to adhere to.

“I said you’re fixing to break a rule that’s a big rule and you’re going to get penalised for it.

Love admits that he was “dead wrong” to say six months ago that LIV was not going to happen and that Phil Mickelson would be the only player to jump ship, but added: “I don’t know what’s going to happen from here on out, but I know it’s going to be a fight and the players are getting more and more unified against it.”