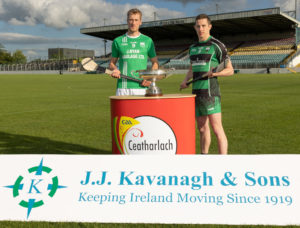 THERE might have been a number of Bagenalstown Gaels players and supporters a little bit miffed that they were written off before they played Rangers in the county semi-final on Sunday.

Yet what was one supposed to think? They had won only two of their group games and they were against Naomh Bríd and Naomh Eoin who both filled the bottom two positions in the league table. They only won those two games by five points as well.

There was nothing to suggest Bagenalstown were going to produce the performance that they did on Sunday. Well maybe the one point defeat in the group stages to the side they are up against this weekend might have been an indicator that something was stirring. But there was no direct indicators.

On the other hand, their St Mullins opponents expect and this was the difference between themselves and Ballinkillen whom they ousted by a single point in the semi-final.

Early betting odds via Paddy Power have St Mullins as low as 3/10 to win on Sunday. Bagenalstown Gaels are 9/4. After last Sunday, that seems a bit absurd but the bookies seldom get it wrong. They did on Sunday when there were talks that Bagenalstown Gaels were as high as 7/1 to win.

Against Rangers five of the Bagenalstown starting forwards scored from play. They took on the responsibility, made the correct decisions most of the time and came away with a handsome 2-18.

At centre-back, Alan Corcoran gave an inspiring performance and his intercept and long-range point in the second half lifted his side to new heights and drove a dagger into the minds of Rangers players.

Craig Doyle needs no introduction to anyone in Carlow hurling. He scored 2-1 in that epic 2008 Christy Ring Cup final where Carlow beat Westmeath in Tullamore. He may have departed the county scene a little bit earlier than others but he has delivered for his club on almost every occasion he togs out. A lot of the Bagenalstown Gaels players who produced on Sunday were only fulfilling the promise which they have shown since coming through the underage system. Danny Doyle scored three points. Jamie Clarke posted 1-1 and Mark McDonald scored vital points in each half. Jack McCullagh has produced some great performances for the county seniors this year. Brian Doyle has battled with injuries but his presence is vital in the team. If the players produce, anyone can be a match winner on the day.

On the other hand, St Mullins also prevailed on Sunday when the gauntlet was thrown down. Craig Wall’s goal invited Ballinkillen to go on and win the game. St Mullins know that script too and Jack Kavanagh’s instant equaliser was typical of the man. In the end, St Mullins pushed John Doyle forward. The young fella used his strength and produced the free which won the game. That didn’t happen by accident either. Match winning know-how. You can’t beat it.  In Paul Doyle and John Doran, St Mullins have canny defenders who are forever winning dirty ball and distributing it cleverly.

This is going to be a close final. Just one separated thee teams when they met in the group stages when St Mullins won 2-12 to 1-14. If Bagenalstown Gaels can park the feeling of being in a county final they have the hunger to bring a senior title to the town which would be the first won on the field since 1967. Don’t put your house on it however.