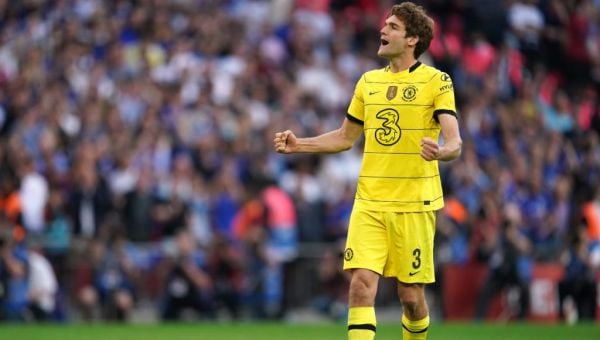 Marc Cucurella’s £60million arrival at Chelsea has paved the way for Alonso to make the move back to Spain that he has craved for some months.

Alonso is understood to want to return to his native Spain to be closer to family, and his impending switch will bring down the curtain on six years in west London.

Chelsea are thought to have been understanding of Alonso’s desire to return to Spain, and have long been in dialogue with Barcelona over a deal.

The 31-year-old’s Chelsea contract expires in summer 2023, leaving a small fee required to complete the deal.

Stamford Bridge chiefs are likely to continue talks with bosses at the Catalan club, however, over both Pierre-Emerick Aubameyang and Frenkie De Jong.

Chelsea are in the market for a striker this summer after Romelu Lukaku returned to Inter Milan on loan.

Tuchel brought the best out of Aubameyang when the pair worked together at Borussia Dortmund, and Chelsea are understood to be weighing up their level of interest in the former Arsenal hitman.

Barcelona are thought to have offered the Gabon striker to Chelsea, while also raising the prospect of a deal for De Jong.

Manchester United have tracked De Jong all summer, but Chelsea are still thought to be in contention.

Chelsea are also understood to be continuing to push to sign Leicester centre-back Wesley Fofana, despite the Foxes insisting the French star is not for sale.

Tuchel batted away questions on a reunion with Aubameyang on Friday but did admit Chelsea have had to talk internally on a wide range of targets amid a transformative summer after the change of ownership.

When quizzed on a possible reunion with Aubameyang, who struck 79 goals under his managership in Dortmund, Tuchel replied: “I would be interested in the 79 goals actually!

“We will not comment further, there are a lot of names out there.

“It’s sometimes due to the fact that we discuss a lot of names and sometimes there’s a lot of speculation and we will not get involved.”

Boehly has stepped into the Chelsea chairman’s role and has spent the summer as interim sporting director, leading the Blues’ transfer negotiations and strategy.

When asked about Neville’s comments, Tuchel replied: “Panicking? No, I would describe it as super hard-working and learning while new on the job.

“So it’s pretty much going on, new ownership and then stepping into the transfer market is probably one of the toughest things you can do when coming from outside.

“But I have nothing but the biggest respect and compliments for both Todd and Behdad.

“I don’t know when they sleep, maybe they never sleep.

“But we have a very honest, very open, very direct line of communication and the transfers so far speak for themselves.

“But like I said, both of the owners are involved in the daily business, they are doing a fantastic job so far and the transfer market speaks for itself.”