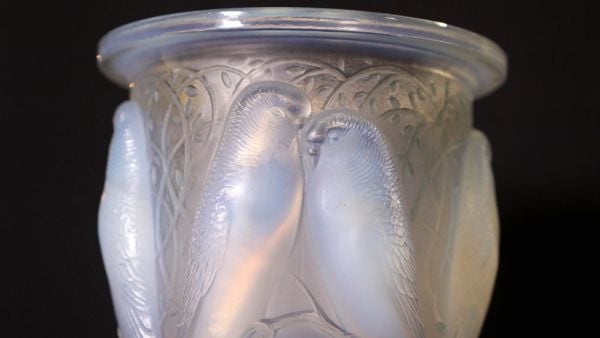 An extremely rare Lalique vase is among the items from a distinguished Belfast family which are set to go under the hammer.

It is part of the contents of the historic Shakespear House in Adelaide Park in the south of the city which is also set to be sold at a later date.

The house was first designed in 1891 for J F Warden, proprietor of the Grand Opera House in the city, and was later bought by John Haslett, who was a surgeon in the Royal Army Medical Corp in 1912.

Bloomfield Auctions’ managing director Karl Bennett said he believes the Lalique vase is of the like never seen before in Ireland.

He described the full range of lots as intriguing, including family portraits, dresses dating to the 1700s and a collar and trophy from a champion greyhound.

“This house and the Haslett family, who have owned it for the past 110 years, are truly intriguing,” he said.

“The entire contents of the house are up for sale on Tuesday and will feature a number of items dating back to the 1600s including family portraits, a Masonic vase from the late 1800s, a stunning bedroom suite, dresses dating back to the 1700s and an Italian inlaid marble table that was brought back from the Grand Tour of Italy in the 1860s.

“(There is) even a silver collar and trophy that belonged to the family’s greyhound, which won a race back in 1851 at the Ballymena Coursing Club.

“Without a doubt though, the star of this sale is the Lalique vase. A very beautiful piece, this vase is extremely rare, and we don’t believe that anything like this has ever been seen in Ireland before.

The Haslett family held a number of influential roles, including the Rev Henry Haslett, who became the Minister of the Presbyterian Church in Castlereagh, was best friends with Samuel Cooke, the founder of May Street Church and whose statue stands outside Belfast Academical Institute.

Mr Bennett said: “It is believed that the Rev Henry penned his sermons on a settee in Shakespear House – which also features in Tuesday’s sale.”

Sir James Haslett went on to become an MP for Belfast West in the UK Parliament from 1885 to 1886 and then became Mayor of Belfast in 1887, the same year he was knighted. Sir James’ statute currently stands outside Belfast City Hall.

Mr Bennett added: “It’s not unreasonable to suggest that the Haslett family have helped to mould the lives we live today.

“They were very interesting and the entire contents of their house hold some incredible history as well as some beautiful pieces.

“This sale is perfect for someone who enjoys collecting antiques or even someone who has an interest in local history.”

The entire contents of the house will be sold on Tuesday at Bloomfield Auctions in East Belfast, with bidding taking place in person and online.