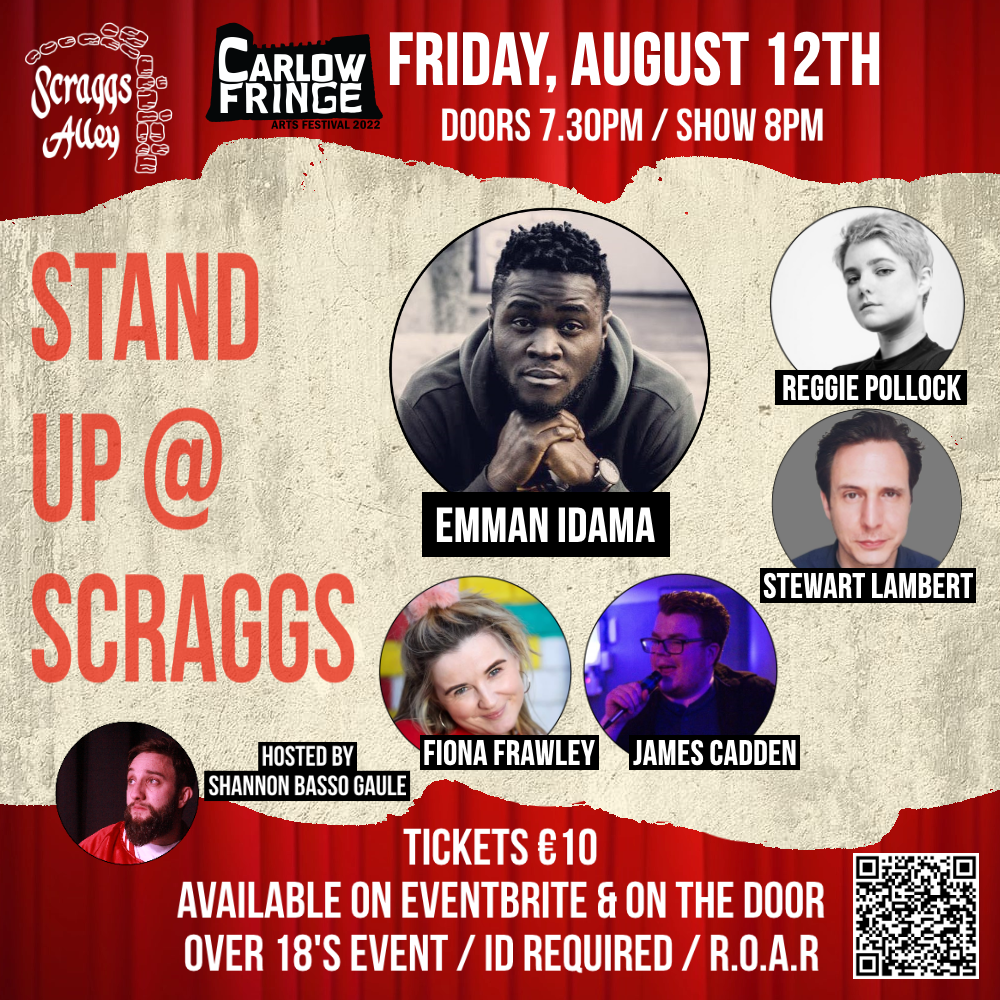 Carlow town will be brimming with art and music when the Carlow Fringe Festival takes place from Thursday to Sunday 11-14 August, with art, music, literature and, of course, comedy, all featuring on the busy programme.

An Gairdín Beo, a community garden on the Dublin Road, will be the main hub, where many of the activities will take place, while other venues include La Boheme, College Street, the Made in Carlow art shop and Scraggs Alley on Tullow Street ,and Club d’Art in Pembroke.

The Tullow Street venue is hosting two nights of comedy, the first on Friday 12 August with  ***Stand up at Scraggs Alley***.

Hosted by Carlow’s own funny man Shannon Basso Gaule, headliner for the night is Emman Idama. Emman is a Nigeria-born Irish comedian, who has been performing around Britain and Ireland with his unique storytelling skills.

Next up is Fiona Frawley, a fast- rising talent on the Irish comedy scene. Fiona uses quick wit, dry humour and the appropriate amount of cringe to give the people what they want –  jokes that make them feel better about their own awkward existence.

James Cadden is a Monaghan man who’s been performing for years. His style has been described as darkly irreverent and energetically boisterous, so if you like your comedy with a bit of an edge, James is certainly one for you.

The final act, Reggie, a native of ‘my mam’s house’ has been shouting at audiences across Ireland since 2016. Reg’s dry wit and scathing humour has proved enough to alienate even the most welcoming of crowds. Tickets are just €10 at Eventbrite or at the door.

On Sunday 14 August, there are more belly laughs when Scraggs Alley hosts The Rollover. Wind down on the final day of Carlow Fringe Festival with a show that is sure to leave you in stitches.

For  more details about Carlow Arts Festival, check out its Facebook page or call into the Made in Carlow art gallery on Tullow Street.