ST Mullins proved again that it’s hard to beat winning pedigree as they swatted aside the challenge of Bagenalstown Gaels to win their 28th Carlow Senior Hurling title. 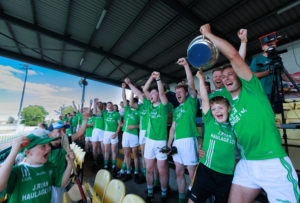 Having beaten reigning champions Mount Leinster Rangers, hopes were high in Bagenalstown that they could bring a title won on the pitch back to the town for the first time since 1967 but those hopes were already flagging by half-time as the brilliant Jason O’Neill led them a merry dance.

O’Neill scored goals in either half and finished the game with a stunning 2-6.

St Mullins led 1-12 to 0-8 at half-time and although Bagenalstown never gave up, they never looked likely to mount a comeback either.

Marty Kavanagh, back home after a summer in Ireland, came off the bench and added three points as St Mullins showed their class and they are back as top dogs in their county.

***See Tuesday’s edition of The Nationalist for extensive coverage of this game, and also the Intermediate Hurling and U20 ‘B’ finals which took place over the weekend.