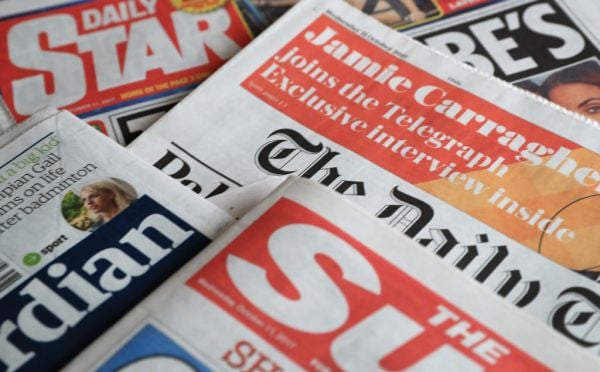 On Monday’s front pages, the owner of Meta Platforms has allocated millions of Euro for enquiries into social media sites, notices for tenants to quit their homes double to 5,599 in a year and the sale of million Euro homes soars in the first half of the year.

The Irish Times reports Facebook owner Meta Platforms is facing a third large fine for violating EUdata laws in Ireland, after setting aside hundreds of millions of Euro to cover the growing cost of regulatory enquiries into its social media sites. It also reports that key plank of the Government’s plan to reduce energy consumption by 2030 is facing a significant legal challenge, it has emerged. 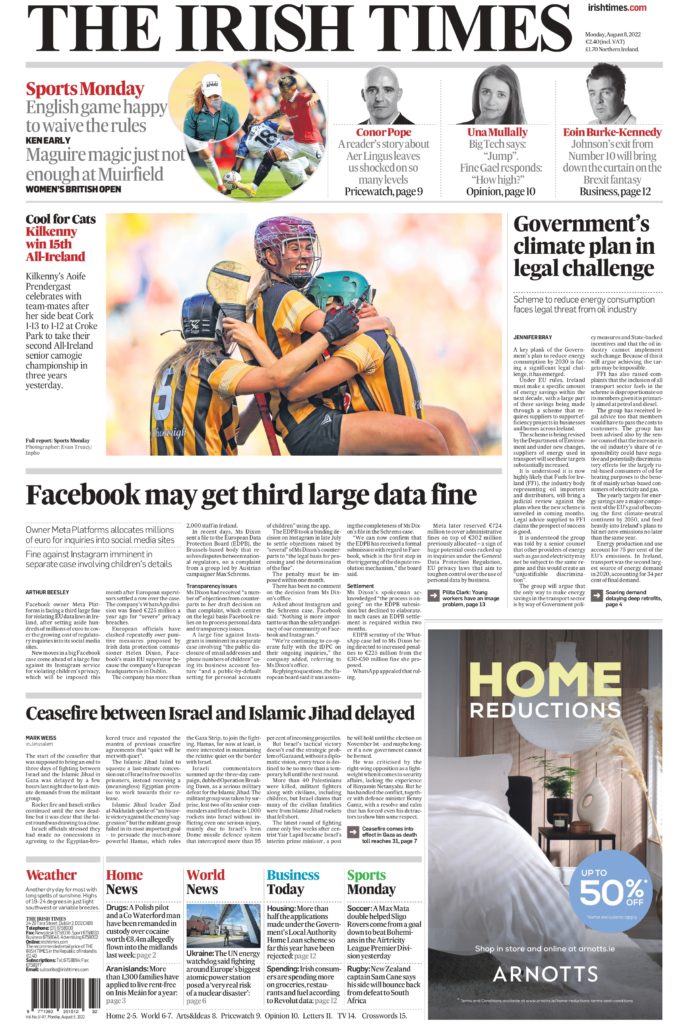 The Irish Examiner reports that a fresh ban on evictions has been called for as the number of renters being forced from their homes by their landlords has more than doubled in the last 12 months. It also reports a Co Waterford man and a Polish pilot with an address in Co Kildare were remanded in custody on Sunday over a seizure of €8.4 million of cocaine allegedly flown into the midlands on Thursday. 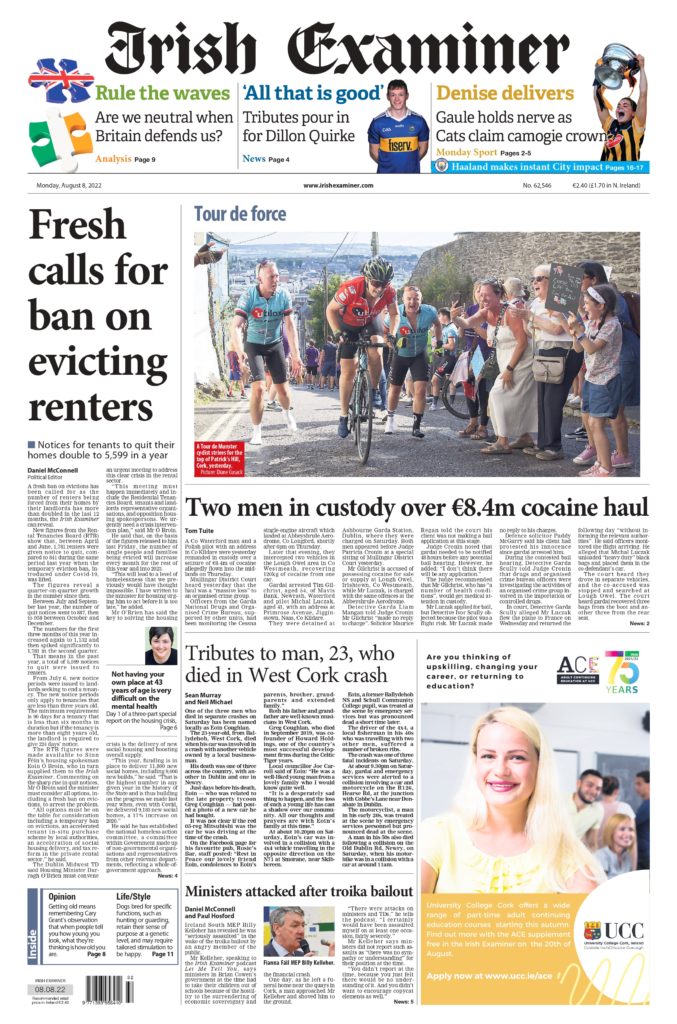 The Irish Independent that Ireland has witnessed an explosion in the sale of €1 million-plus homes over the past 12 months, as the number of residential Dublin property deals values at €1 million or more has soared by 44 per cent. It also reports that Sinn Féin is purposing an almost €50 a week increase in the Jobseeker’s Allowance. 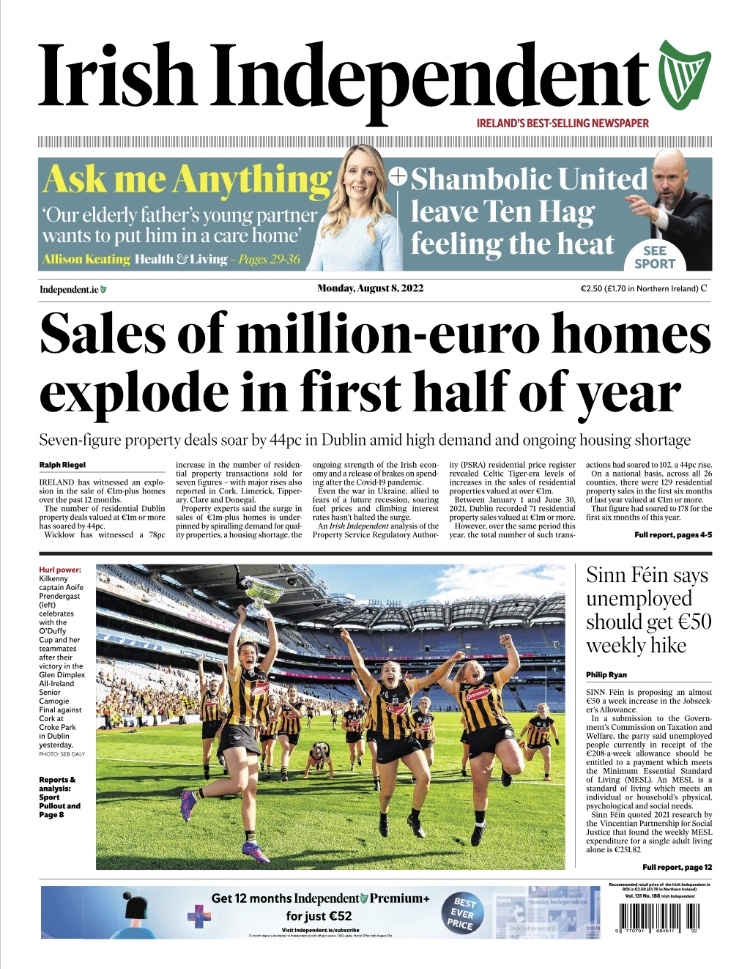 The Echo reports that almost 3,000 children in Cork and Kerry are on the waiting list for initial contact from the Child Disability Network Team (CDNT) in the region, the second-highest waiting list in the country. While Cork Parkinson’s Association (CPA) has voiced serious concerns over the lack of dedicated Parkinson’s nurses in Cork, saying while Ireland is a first-world country, when it comes to Parkinson’s “we are a third-world treatment country.” 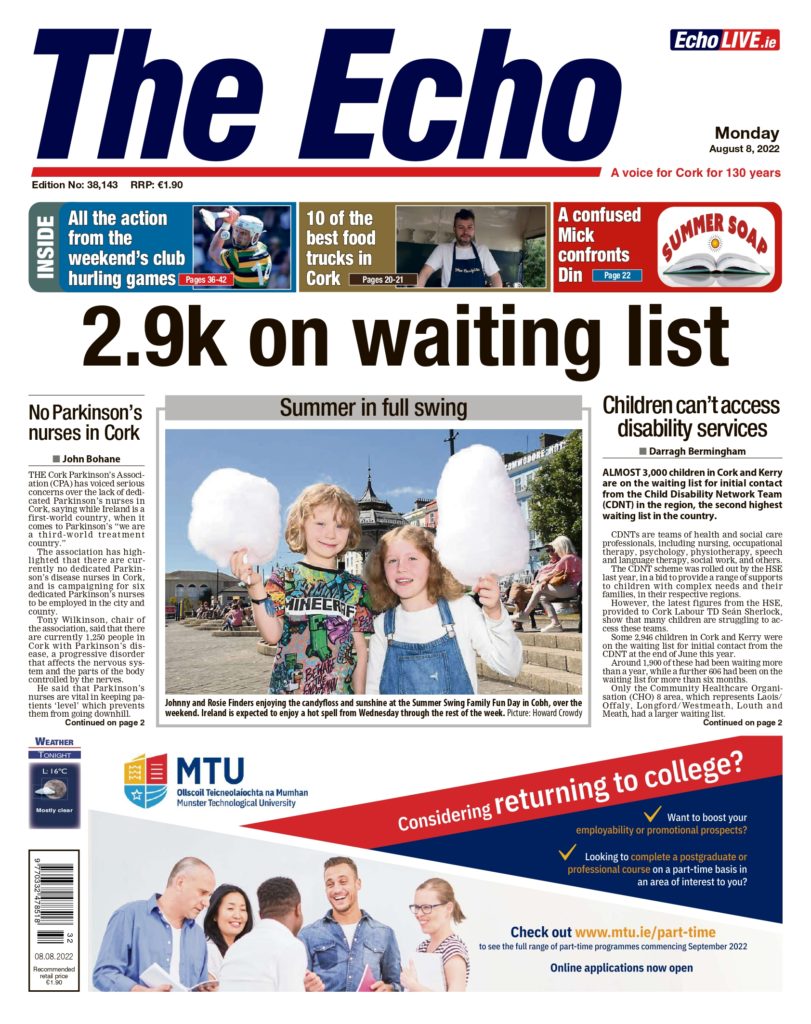 On the front page of the Irish Daily Mail an energy expert warns that Ireland is the “worst prepared country in Europe” for an energy crisis, and people may be at risk of power cuts during the winter. 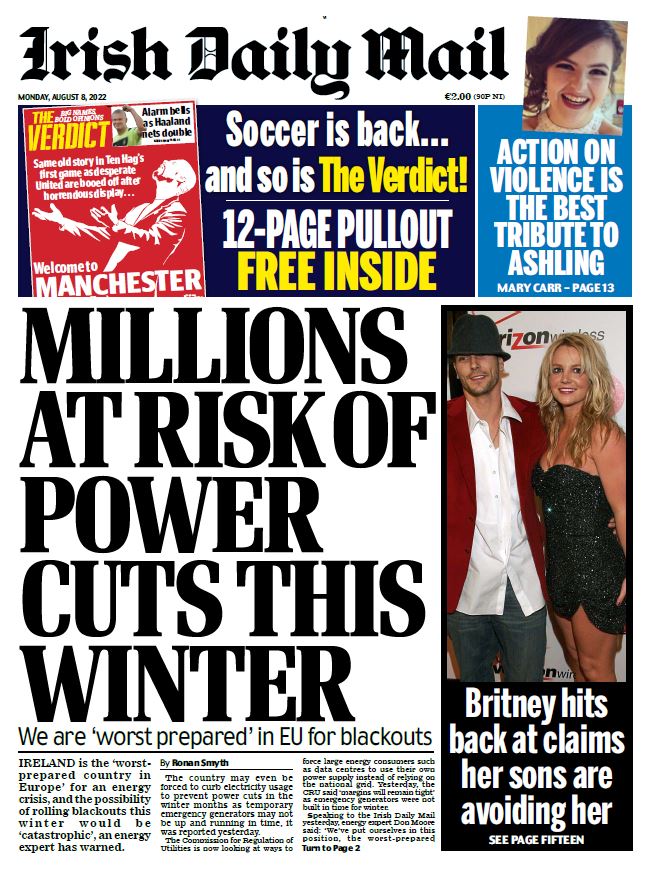 Meanwhile in the UK, Urgent calls for Parliament to address the cost-of-living crisis leads the papers at the start of the working week.

The Daily Mirror reports former prime minister Gordon Brown has demanded the immediate recall of Parliament to find actionable solutions to the soaring cost of living.

Monday’s front page: Get back to sort crisis https://t.co/97hoD4I2La#TomorrowsPapersToday pic.twitter.com/Q7B3ER5oEc

The i says the issue will be the deciding factor in the Conservative leadership contest, while the Financial Times reports race-favourite Liz Truss is under pressure to promise more help for poor households after expressing her preference for tax cuts over “handouts”.

The Foreign Secretary is considering making direct payments to households, according to the Daily Express.

Two thirds of voters believe the Government should prioritise tackling the cost of living over tax cuts, according to The Times.

THE TIMES: Get inflation down before cutting tax, voters urge #TomorrowsPapersToday pic.twitter.com/SPsXjhMCio

Staying with politics, the Daily Mail leads with Culture Secretary Nadine Dorries calling for Tory MPs to resign from the inquiry into Boris Johnson over the ‘partygate’ saga.

The Telegraph carries comments from Health Secretary Steve Barclay, who says a “real sprint” will be needed before winter to protect the NHS from the combined threats of seasonal flu, Covid-19 and the cost-of-living crisis.

The Independent says police officers are being called to cover for medical services as the NHS faces “surging demand”.

According to The Guardian, a leaked Ministry of Justice document suggests Justice Secretary Dominic Raab is considering introducing changes that could limit ministers’ accountability in judicial reviews.

The Sun leads with fire authorities calling for garden barbecues to be “stamped out” ahead of another 40C heatwave.

And the Daily Star says a water company has suggested Britons forego showers in a bid to conserve water.