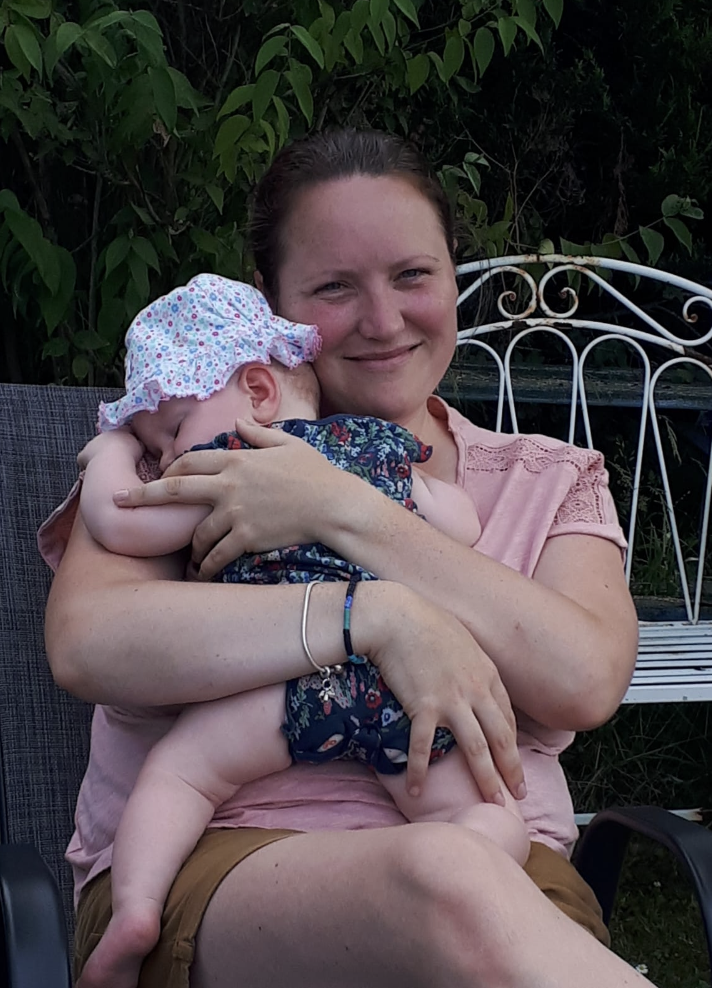 Aged 33 and the mother of a baby daughter, Sheena’s passing followed diagnosis of an aggressive brain tumour.

An only girl, Sheena was daughter of Patricia (née O’Toole) and the late Arnold Mahon, being cherished sister of Arnie, Jeremy and David. Her dad Arnold died in late March 2021 aged 75.

A gifted musician, last year Sheena appeared with the Lee Valley String Band from Cork on RTÉ and TG4, when performing at the Cork Jazz Festival. The bands with which she played were asked to perform at a multitude of festivals and gigs in Ireland and internationally.

The life of Sheena Kneeper was outlined in an excellently crafted, heartfelt eulogy to “his little sister” by brother Arnie Mahon during her funeral Mass in Holy Cross Church, Killeshin on Tuesday 12 July.

Arnie told the congregation: “Sheena would only have warm and positive words to say about other people, so it’s important to take a little time to describe what an amazing person she was.

“I actually can’t believe I’m doing this, as she was only 33 years’ old. Last October, she was flying it, happy and healthy. We’re just devastated and shell-shocked really. We knew we were in trouble when we got the GBM diagnosis. It came out of nowhere. She did absolutely fight it on her own terms, though, and it was inspiring as always to watch Sheena tackle this challenge in her own creative way.”

Arnie’s tribute continued: “Only a month ago she was playing the fiddle in a mini-seisiún in Marymount hospice in Cork, with nurses and patients watching on from the balconies in the outdoor dining area. Everyone was loving it. Those  memories are truly special and, in only 33 years, she gave us all special memories to truly cherish by the bucket load.”

He described Sheena as “absolutely selfless, full of love and positivity. She would do anything for anybody, especially those who needed help. She was kind, caring, empathetic and incredibly thoughtful. She loved the craic and adored spending time with family and friends. We all absolutely loved her, as she did us.”

Arnie said Sheena also collected a wealth of memories to leave with her family. “She set up a Dropbox account with all the family pictures and videos going back a good while. She often printed pictures and framed them. It was like she unintentionally prepared us for something like this. She was that thoughtful.

“She was the most unbelievable sister, daughter, wife and friend we could have had.”

Arnie said it would be very easy to be bitter and angry about what happened and question everything, because it really wasn’t fair the diagnosis Sheena received, but she wouldn’t want that. “She wouldn’t want anyone getting bogged down in negativity. As her own life has taught us, life is too short.”

That life, he continued, begam on 2 November 1988. Sheena was the second of four children, and being the only girl ensured a doting dad. “Growing up together, the house was lively and great craic with four kids and we absolutely killed each other, all at the same time! On one occasion, in the heat of battle, Sheena cracked the living room door off David’s head with a kick after he had riled her. I’m pretty sure he still has a little scar on his head.

“One other battle I recall was driving through Normandy in France, when Jeremy and Sheena were asked by David and myself who would win a fight between them? Cue three minutes later and an estate car with IRL on the back pulled in on the side of the motorway with two parents reading the riot act to the four children after a flurry of punches were thrown between – Jerry (Jeremy) and Sheena!

“My two strongest memories of the early parts of Sheena’s life was on rainy days watching her positioned in front of the TV singing along to Disney’s ***Sing a long song*** videos with a purple-and-yellow microphone. Her no 1 tune was ***Under the sea*** from ***The Little Mermaid***. She also started Suzuki violin with Noelle Robinson in Athy, after Mam had bribed her with Supermac’s to get her started. The singing and violin playing were two talents that Sheena would later pass on to so many children and adults over the years.

“It reminds me of an acorn which, years and years later, matures into a great oak tree. Sheena’s musical journey from those formative years to her later life was like that, she just had a greater impact in a shorter time, teaching so many to sing and play and connect through making music.”

Arnie recalled that Sheena attended Gaelscoil Eoghain Uí Thuarisc in Carlow until about first or second class and then moving, in September 1996, with him (Arnie) to Killeshin National School. “The blend of the Gaelscoil and Killeshin gave us a love for Irish music and culture and it’s no surprise to me that Sheena later went down the music route. Other interests in Sheena’s life were ballet and stage school and singing in local choirs. Sheena had a multitude of friends around Laois, Carlow and also Kilkenny, from when she attended Kilkenny College.”

Her love of music was nurtured in Kilkenny and it was no surprise when she went on to the Cork School of Music and loved it there. “At home, we really noticed the quality of Sheena’s music after only a few months there. There was no keeping up with her musically anymore. We just sat back and listened and watched as she would perform the sweetest melodies and harmonies. We were delighted. Sheena was making us sound great when we played together at home or in The Mall pub in Killeshin.

“Sheena loved the Cork School of Music and made so many friendships with other gifted and talented individuals. It was the perfect learning and life environment for her and she really prospered.

“The church in Cork also became a big part of her life as she took a big interest in the Bible. She made great friends for life from these groups and spoke so highly of them all. And in turn, they were always so good to Sheena, especially when she was unwell recently.”

It was in Cork that she met the love of her life Ian on a random Wednesday in 2008. Ian fell for Sheena straight away and asked her to play in a seisiún. “It was very clever from Ian as once you were committed to a weekly seisiún you’d likely get to see plenty of each other. Sheena was equally as keen and tactical lending Ian a fiddle ensured further interactions!

“They played tunes in a pub called the Woodford in Cork city. They were courting for a couple of months before Ian moved to Waterford. They then started dating after Ian brought her to Mahon Falls in the Comeragh Mountains and made it official. Ian proposed to Sheena in Currabinny Woods in 2010. Ian was 23, Sheena was 21.

“Ian often tells the story of him asking Dad’s permission for Sheena’s hand at such a young age. He approached Dad, who was hanging washing in the back garden on a warm day. Dad’s response to ‘can I have your daughter’s hand in marriage’ was: ‘Does mammy know?’ Ian then pops over to Mam lying out in the sun at the patio. When asked the question, Mam just stares at him open-mouthed and nearly comes off the deckchair. Sheena at this point is peeking out nervously from the upstairs windows. Ian, ever the optimist, takes it as a win and they were married in 2011.”

Arnie said it worked out so well that they got married early and therefore spent many happy married years together between Carrigaline, Newark-on-Trent for three years, when Ian was studying violin-making, Mallow, Monard Glen and Ballincollig for the last 15 months.

“These were precious, precious years, with the highlight obviously being the birth of Ada in 2020. This was something that Sheena loved more than anything. She was the happiest mother in the world to little Ada and, later on, a doting godmother and aunty to Ardal and Rían. She was so excited watching the three of them together.”

Arnie thanked all the medical personnel in Cork University Hospital, St Luke Hospital, Kilkenny and Marymount for giving Sheena great care in her final nine months. He extended thanks also to their mam Patricia “for being unbelievable in this time, especially so soon after Dad’s passing and to Dawn, who came over from the States to help out for three months. I could name so many, but I’ll just say thanks to everyone for all their help, all the way up to today.”

Having looked at the online condolences section on rip.ie, with kind words flowing from all directions, Arnie said Sheena deserved every single kind word she received, adding: Goodness knows she gave enough of them out. Among the tributes paid to Sheena online were terms like ‘a ray of sunshine’, ‘positive energy and enthusiasm’, ‘inspiring’, ‘most genuine’, ‘warmest person I have ever met’.

Arnie said Sheena was an incredible sister. Anyone who knew her would only have fond memories of her. I would go as far as to say she never fell out with anyone in her life. She picked up that trait from Dad. They both loved connecting with people. Little chats here and there, no matter how big or small the gathering; getting to know new people all the time and then sharing happy moments with people. Nothing was a problem. There was always a creative solution.

“David and Jeremy’s junior cert art projects were considerably enhanced by her skills. She was very good to her three brothers and we adored her. She even used her artwork on a Hardnager violin made by Ian and his Icelandic friend. She loved doing things for everyone in her life, whether it was baking, cooking nice meals, planning a day out in Cork, helping with a wedding or any occasion, or organising music for an event, which she loved doing. She will live on in our memories through her music and her beautiful little daughter Ada.

“She was a key member of well-known bands in Cork such as Grits and Gravy, the Lee Valley String Band, Staying Down Shoes, Madrigal 75 and the Brendan Butler Trio, everyone basically wanted to borrow her for their band! Shenna really connected deeply with everyone she ever met.

“Sheena will live on in our memories, through her music and her beautiful little daughter Ada.”

Arnie’s eulogy concluded: “Most of all, she will live on through all the skills, techniques and knowledge she has passed on to all her friends and students. Sheena, thanks for everything.”

Readings at Mass were by David Mahon (brother) and Serena Coonan (sister-in-law). Prayers of the Faithful were read by Elaine O’Gorman (sister-in-law) and three of Sheena’s close friends – Colm Bolton, Niamh Phelan and Niamh Fitzgerald.

Gifts reflective of Sheena’s life brought to the altar were a pizza cutter, presented by Duke Knepper (father-in-law) – Sheena loved making and eating pizza; Dawn Knepper (mother-in-law) presented baby daughter Ada’s cuddly toy and lavender, as Sheena liked the smell of it; a violin, symbolising Sheena’s musical talent and love of music, was brought forward by brother Jeremy Mahon; a Grits and Gravy CD was presented by band member Camilla Monroe; a Westport Bluegrass Music Festival t-shirt, an event in which she performed, was brought forward by Sheena’s brother Arnie.

Music was performed by Sheena’s brothers, the Bolton family and the four other members of the Grits and Gravy Band, including Ian, Sheena’s husband.

Sheena had reposed at her mother’s home in Derrymoyle on Monday 11 July, with prayers that evening being led by Fr John Dunphy, PP, Graiguecullen-Killeshin.