CARLOW Community Games Chairperson, Paul Doogue, is delighted to be able to welcome up to 26 counties to the National Athletics Finals which will be held at the SETU for the second year in a row on Saturday 13 August. 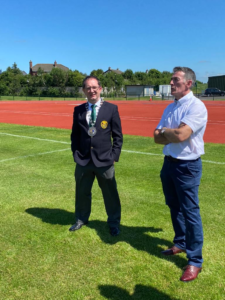 Chairperson of Carlow Community Games Paul Doogue chats with National President Gerry McGuinness at the wonderful facilities of the new SETU in Carlow.

What’s more, a mere two weeks later on the weekend of 27 and 28 August, thousands of visitors will arrive again. The second weekend will be held in the Visual Arts centre and St Patrick’s College for a weekend of arts and culture, including dance, music, art, handwriting, as well as the draughts and chess All-Ireland finals.

Thousands of young boys and girls will be participating on both weekends, bringing with them their parents and families. It is a great honour for Carlow to host the finals, and to have venues that are top class to hold the events in. Every hotel and bed and breakfast is booked out so it’s a plus on so many fronts for the businesses and people of Carlow and the surrounding areas.

A huge thank you must go to all venues that are hosting the finals, as well as to Carlow County Council who have been so supportive of Community Games over very many years.

Community Games National CEO David Hoysted and National President Gerry Mc Guinness and their team are very excited about holding the finals in Carlow. Our Carlow team is equally delighted to work with them this year and hopefully for many more years to come.

Due to the sweltering heat wave conditions, there have been changes to the schedule which can been seen here.