THE league season got underway for us last weekend as we travelled away to York City to face the recently promoted side in their new stadium. We went up there full of confidence after a very strong pre-season campaign, but we were very quickly brought back down to earth with a 2-0 defeat. In truth it could have been a lot worse but for the heroics of our goalkeeper during the game. 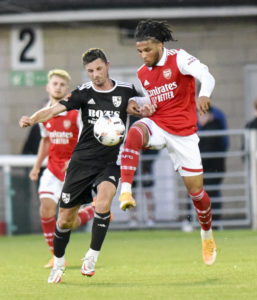 Padraig Amond has been settling into life at Woking but his team made a disappointing start to the new season last week
Photo: David Holmes

We started the game very poorly and then we never got going at all. Even though we had had such a good pre-season and are very fit, York just seemed to run all over us and there is no explanation for it apart from it was just a really bad day at the office. We were second best in every department (apart from goalkeeper maybe) but you won’t come away from a game with any points if that is the way things are for your team on the pitch. At times it felt like there were more players on the pitch for them which is always a horrible feeling.

The worst thing about it all is that even though we were second best for the whole game we gave them the opening goal after riding our luck for a bit. One misplaced back pass from one of our players put their striker through one on one and he made no mistake. If we had kept the game at 0-0 until half time, then the necessary changes could have been made and we wouldn’t have had to chase the game in the second half which ultimately led to us conceding the second goal which really killed the game on us.

I felt extremely bad for our supporters who had travelled a long way up to York for the game and then had to watch what we produced. There are days when you don’t play well but the least, they deserved was a committed showing from us and I don’t feel like they got that at all. We now have a lot to do to win back their trust and we owe them a lot of good performances off the back of the one we just gave them. they had gone three or four months without watching their team play a league game and they didn’t deserve that but hopefully it was a one off from us.

Thankfully, we have 45 more league games to put things right for ourselves, but we have put a bit of pressure on ourselves now. We have our first home league game of the season this Saturday against Dagenham and Redbridge and we need a reaction from the players. Throughout the week we will work as hard as possible to redeem ourselves and make sure we put in a performance that we can be proud of and that the supporters can be proud of too. We can all say the right things throughout the week but ultimately it comes down to three o’clock next Saturday and for us to be brave on the pitch and front up our mistakes of the previous week so actions will speak louder than words for us hopefully. They started their campaign with a 2-2 draw at home, but they fought back from two goals down to get that point so they will be coming to us on a bit of a high after that comeback.

Dagenham are a lot of people’s fancies to run automatic promotion close throughout the season. They have signed some very good players with Football League experience so we will need to be at our best to get something from the game. A couple of my former teammates are there, and I know exactly how good those players can be too. One game doesn’t define a team’s season and things will all be forgotten about very quickly if we were to get all three points on Saturday, but we need to get some credit back after we let ourselves down badly last week.

Four years ago, at Newport County we lost the first game of the season 3-0 away from home to Mansfield Town and we were terrible. On the bus journey on the way home we were almost fearing the worst for the season ahead, but we had the right characters in the dressing room, and we turned things around to almost get promoted in the play-off final. I’m not suggesting that is going to happen, but we have to make things right and come the final whistle on Saturday I hope we are back on the right track.