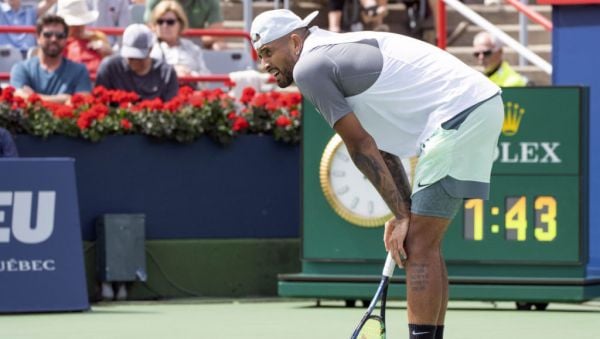 Nick Kyrgios’ winning streak came to an end with defeat by Hubert Hurkacz in the quarter-finals of the National Bank Open in Montreal.

The Australian had built on his run to the Wimbledon final by winning an ATP title in Washington last week and went into the clash having won 15 of his last 16 matches.

Kyrgios looked weary but recovered from losing the opening set on a tie-break to turn the tables in the second.

The deciding set was one-sided, though, with Kyrgios ranting at the umpire about a lengthy bathroom break taken by Hurkacz and struggling physically as he fell to a 7-6 (4) 6-7 (5) 6-1 defeat.

In the semi-finals, Pole Hurkacz, who is the only player left to have previously won an ATP Masters title, will take on fourth seed Casper Ruud.

The Norwegian made it a miserable day for home hope Felix Auger-Aliassime, handing the young Canadian the heaviest defeat of his career as he slumped to a 6-1 6-2 loss.

In the women’s event in Toronto, Simona Halep continued her resurgence by overcoming Coco Gauff 6-4 7-6 (2), maintaining her record of not having dropped a set in four meetings with the American teenager.