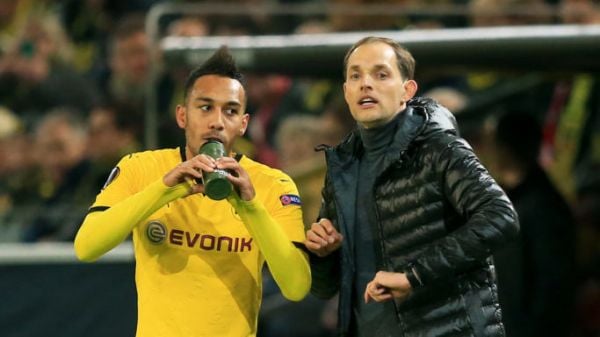 Chelsea boss Thomas Tuchel has admitted he will always have a “close bond” with Pierre-Emerick Aubameyang.

Tuchel refused to comment on the chances of Barcelona striker Aubameyang moving to Stamford Bridge, but admitted the Blues are still looking for further recruits.

The German did not shut down the links however, with the Blues understood to retain interest in the Gabon international.

Tuchel also did not comment on speculation over Leicester defender Wesley Fofana, with the Blues also understood to be continuing to push to prise the Frenchman away from the Foxes.

Tuchel managed Aubameyang at Borussia Dortmund and admitted he still harbours strong regard for him.

“This is totally separate from anything that is happening now, but I enjoyed a lot working with Auba while I was at Dortmund,” said Tuchel.

“Some players stay your players because you were very, very close. And Auba is one of those players.

“There was always straight away this close bond. They always stay your players in a way.”

Arsenal boss Mikel Arteta forced the issue that led to Aubameyang’s switch to Barcelona last season, after a string of disciplinary issues and a clear falling-out.

In stressing his strong relationship with Aubameyang in Germany, Tuchel added: “I experienced no issues with him, but this has nothing to do with the situation in Arsenal, about which I will also not comment out of respect.

“In Dortmund there was never an issue.”

Leicester have moved from insisting highly-rated Fofana was not for sale at all, to admitting that the right offer might prove too lucrative to reject.

Chelsea are expected to continue to push to sign the 21-year-old, but Tuchel refused to be drawn on those links.

Asked about Fofana, Tuchel replied: “I will not comment. We could use one more central defender, if you look at the numbers, given the fact at the moment we play with a back three.

“But they are not central defenders, so we could do with one more, but let’s see what happens.

“I think we could use and strengthen our squad in strength and depth, in both, but it’s one thing you wish for and what’s possible.

“It needs to be possible, we’re looking for top quality, personality and good characters.

“You don’t always get what you wish for, that’s why we’re calm and ambitious at the same time. But there are still quite a few days to go until the end of the transfer window.”

“Marcos is not in training at the moment and tries to finalise his transfer,” said Tuchel. “So he will not be available for tomorrow’s game.

“Mateo Kovacic also has issues with his knee, so we decided to take a step back, increase training time and have no more reaction, but he will be missing.”