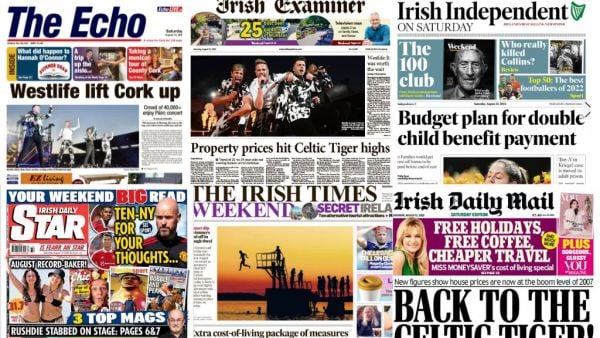 On Saturday’s front pages, preparations for Budget day are underway, with reports of €1 billion to be made available to alleviate rising cost of living pressures. The cost of a home in Ireland is now equal to 2007 Celtic Tiger prices, whilst Friday was the hottest day ever recorded in August with the Mercury hitting 31.7 degrees in Oak Park in Carlow.

The Irish Times reports up to €1 billion could be made available on Budget day to deal with cost of living pressures. More electricity subsidies and bonus welfare payment are being examined. It also reports that a man has been taken into custody following the attack of author Salman Rushdie on stage in New York. 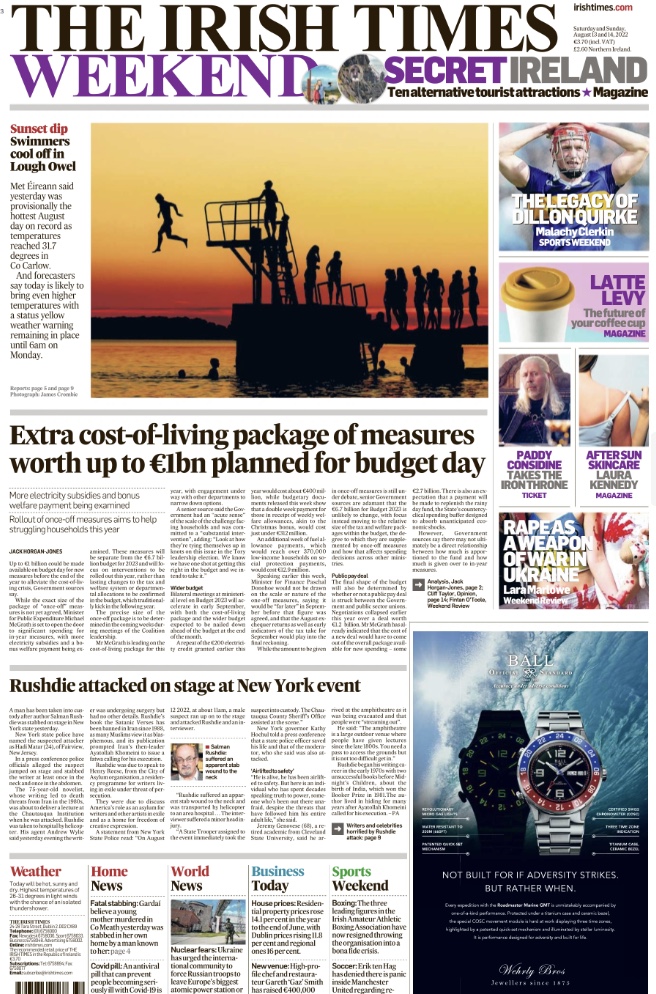 On the front page of the Irish Examiner, it reports that property prices in Ireland have reached their highest level since the peak of the Celtic Tiger boom, with double-digit percentage rises in the cost of homes in every part of the country over the last year. It also reports on Westlife’s first return to Páirc Uí Chaoimh in their 24-year history. 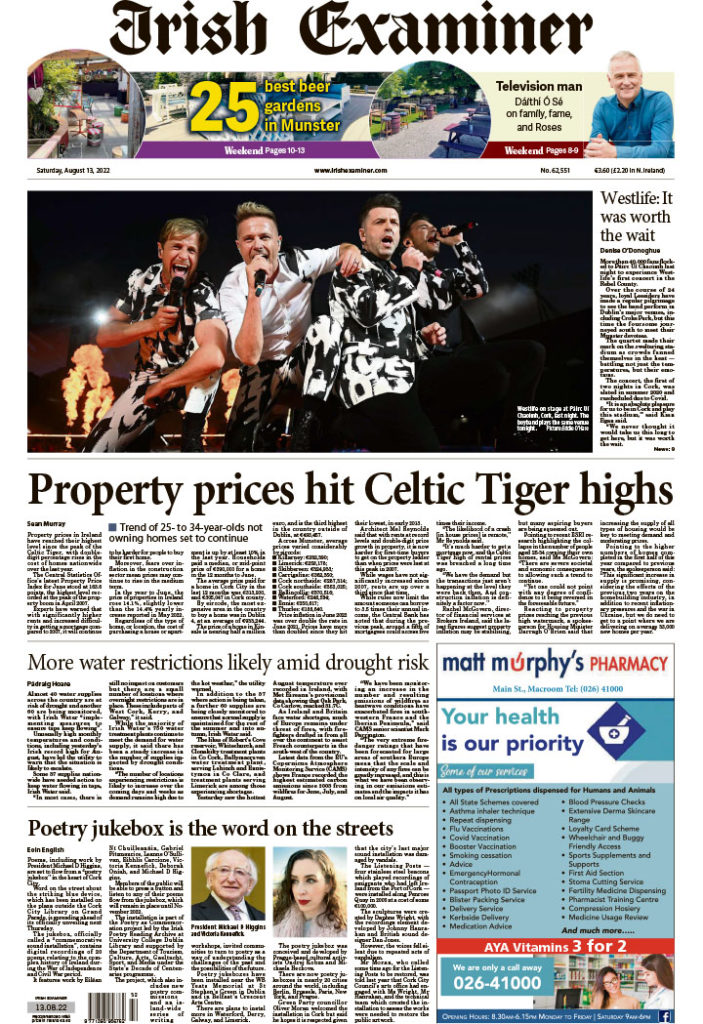 The Irish Independent reports that the Government is considering a double payment of the €140-a-month child benefit payment as part of a cost-of-living package to be announced on Budget day. It also reports that one of the teenagers convicted of the murder of schoolgirl Ana Kriegal has been transferred to an adult prison, where he will serve the remainder of his sentence. 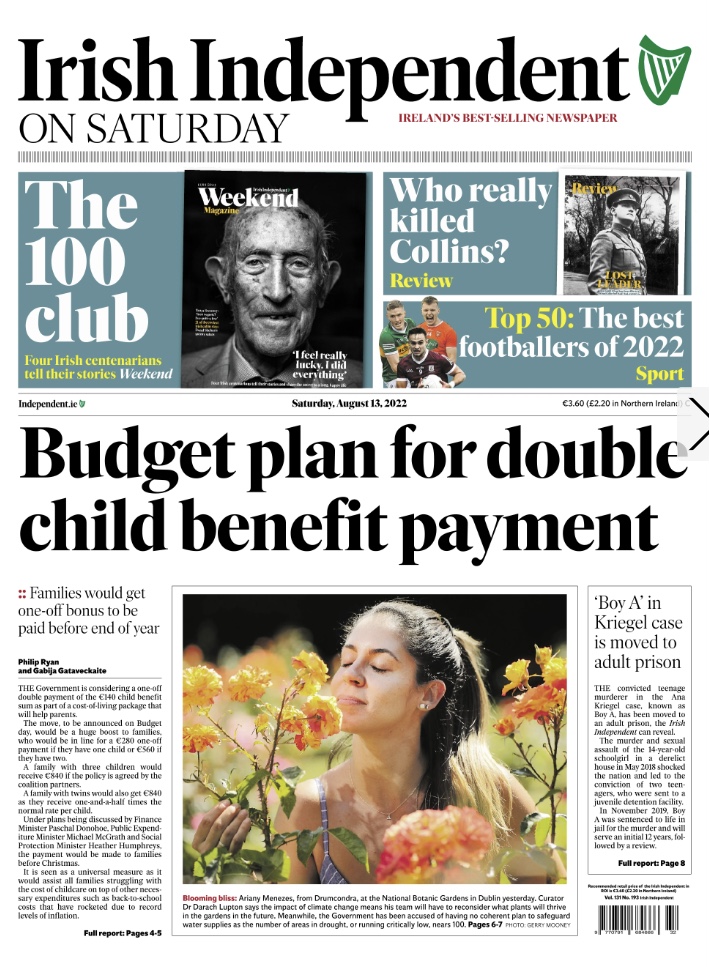 The Irish Daily Mail also reports on rising housing costs. It reports that new figures show house prices are now at the boom level of 2007. It says the average costs of a home in Ireland stands at €340,379. While Friday was the hottest day ever recorded in August with the mercury hitting 31.7 degrees in Oak Park, Co Carlow. 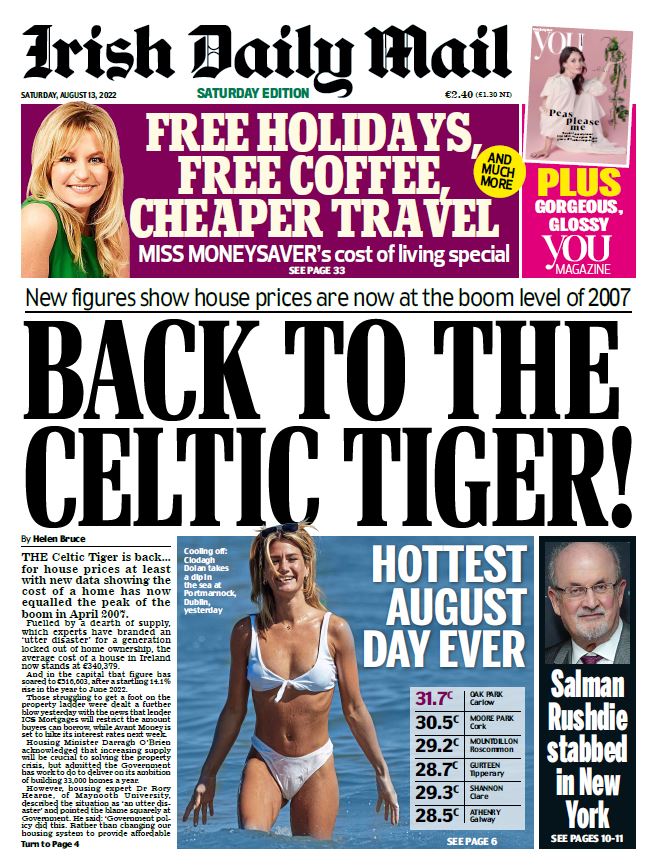 On the front page of The Echo, more than 40,000 people enjoyed Westlife’s Páirc Uí Chaoimh concert in the heat. The boyband are playing two nights in Cork as part of their Wild Dreams tour. 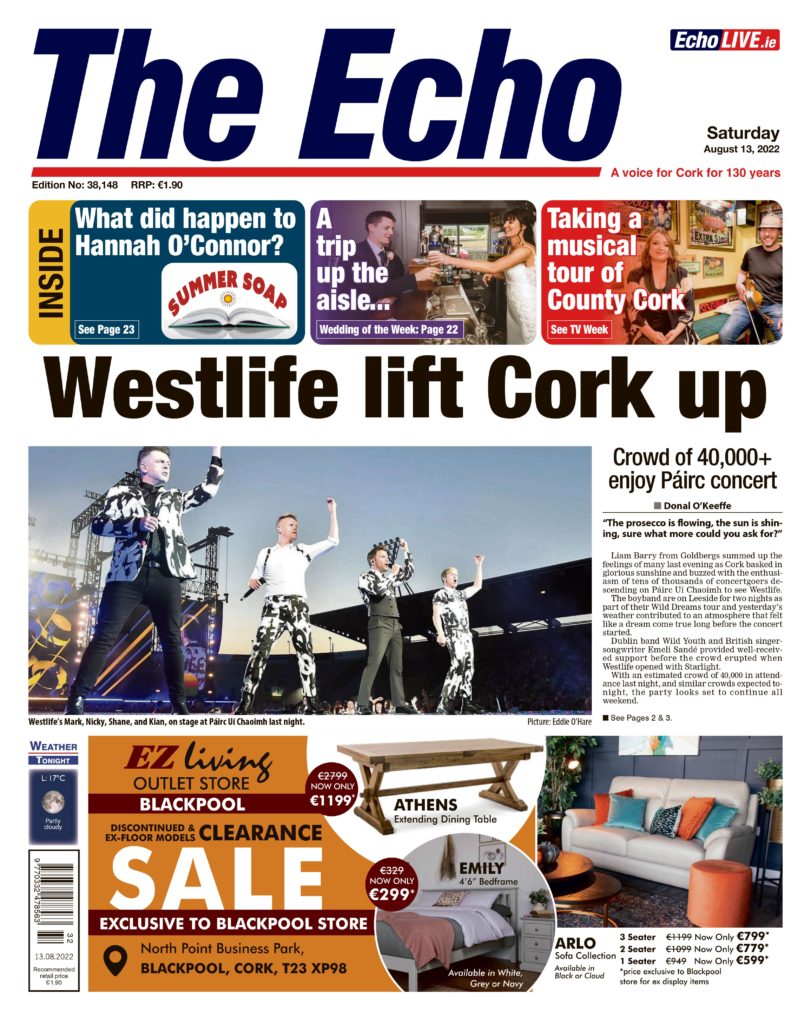 The Irish Daily Star reports of a heatwave miracle after two strangers save a boy’s life after getting into difficulty at sea at Youghal beach in Co Cork on Friday. 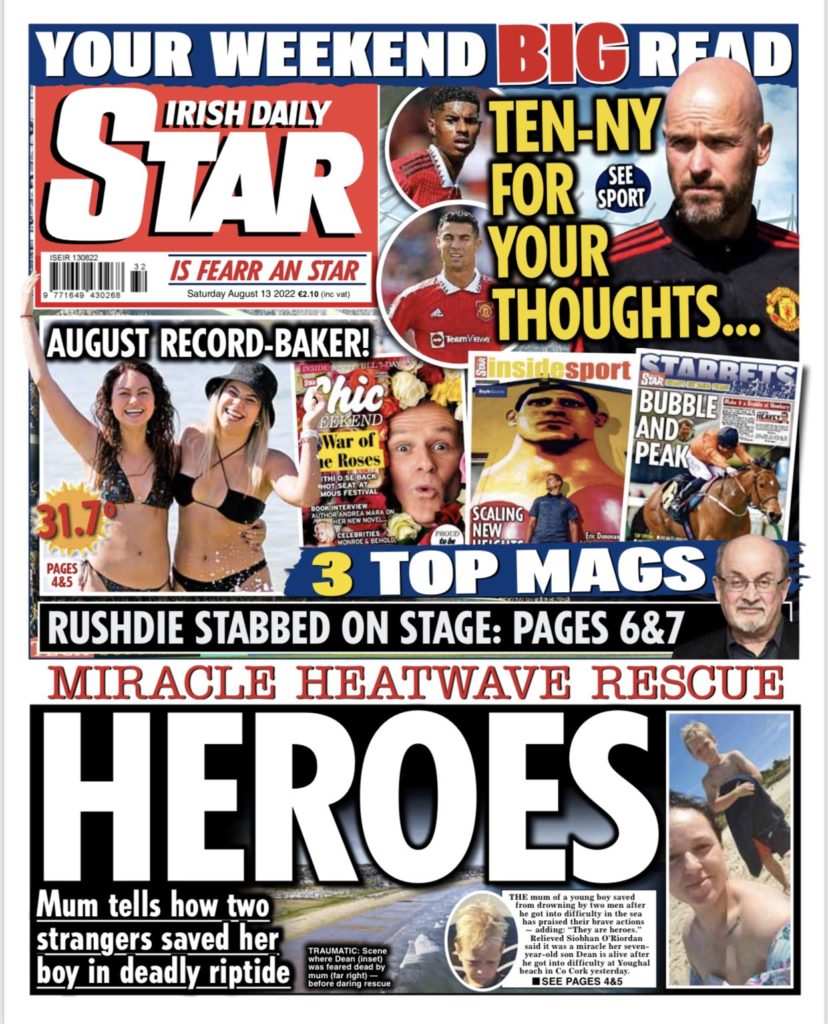 Meanwhile, in the UK, the mastheads mainly focus on the “frenzied” stabbing of Sir Salman Rushdie in New York state.

The author was attacked while on stage at a literary festival, report The Daily Telegraph, The Sun and Daily Mirror.

On tomorrow’s front page: Salman Rushdie stabbed in the neck by man who stormed Chautauqua Institution stage as author airlifted to hospitalhttps://t.co/Jmv12akt2f pic.twitter.com/5QnRIzYORL

Daily Express calls the stabbing “frenzied”, with The Guardian and the Daily Mail saying the 75-year-old was flown by helicopter to hospital for treatment.

Farmers say the drought that has been declared for parts of England will result in a poor quality potato crop and significant financial losses, according to i weekend.

And Daily Star publishes National Trust research showing rivers which are home to beavers are less likely to dry up.

Cute critters save the day! 😁 pic.twitter.com/U2UgrNyjva