THE Kildare link to the Carlow senior football team has grown with the appointment of Eammon Callaghan as Performance Coach. 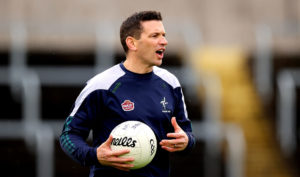 Callaghan is one of Kildare’s best ever players and he made more league and championship appearances for the county than anybody else. Among his many highlights was a goal in the 2010 All-Ireland semi-final against Down, when current Carlow manager Niall Carew was a selector for Kildare.

Although he will turn 40 later in the year, Callaghan still turns out for his club Naas, managed by Éire Óg man Joe Murphy, to great effect. Last year, he helped Naas win their first Kildare senior title in over 30 years and he played in the Leinster final where Naas were beaten by Kilmacud Crokes.

He shown an interest in coaching in the past and has been involved in some of the very successful underage teams in his club, and this year was also a selector for the Kildare minor team who reached the Leinster final before losing to Dublin.

His role will involve meeting, and discussing issues, with players in one-to-one meetings with a view to maximising their performance level and he will be a major part of the Carlow backroom team.