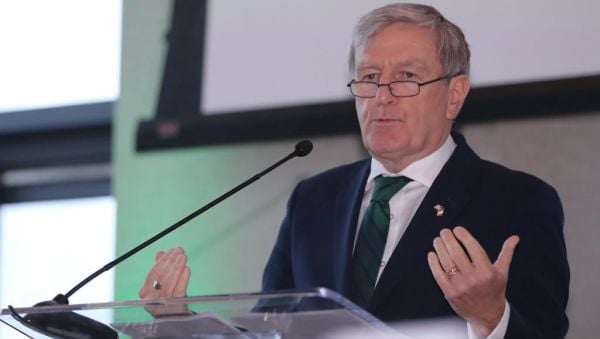 Irish Ambassador to the United States Daniel Mulhall has said American support for the Good Friday Agreement is as strong as ever, as he reflected on his five-year term in the United States.

Mr Mulhall’s last day was Friday, August 12th, and he spoke to BreakingNews.ie about the “great privilege” of serving as ambassador to the US.

“Being an ambassador for Ireland anywhere in the world is a great privilege, but being ambassador in a country like the United States is exceptional, because of the warmth, of the welcome for us here, because of the connections we have here across the board; politically, economically, people-to-people links… you name it, America is one of our most important partners, probably our most important partner overall in the world.

“It’s been a privilege beyond imagining for me to serve here for the last five years.”

“That’s what I’ve been trying to do here over the last five years with my colleagues in the Embassy and our consulate network across the United States. We have seven consulates, so a big presence here, and I’ve been privileged to lead a talented team that has been seeking to ensure our relationship with the United States continues to thrive and prosper, which they will continue to do under my successor.”

Amid the ongoing challenges presented by Brexit and the Northern Ireland Protocol, political figures in the US have highlighted the country’s support for the Good Friday Agreement.

Mr Mulhall said American support for the Good Friday Agreement, and peace on the island of Ireland, remains strong.

“We have a lot of support here in the United States for the Good Friday Agreement, peace in Northern Ireland is a big deal for Americans. They take it seriously, they recognise that they played an important role in the peace process and many of them are determined to ensure that it continues to bring peace and prosperity to Ireland.

Today we say a fond farewell to Ambassador @DanMulhall and his wife Greta after five eventful years.

Amb Mulhall worked tirelessly for the Irish community in 🇺🇸 and to further enhance the unique relationship between 🇺🇸 & 🇮🇪.

We wish him and Greta well in their future ventures! pic.twitter.com/dWrPIDtynn

Mr Mulhall said being present for the inauguration of Joe Biden was one of the personal highlights of his time in America.

“A president who refers to himself as Irish, has a genuine pride in his Irish identity, who quotes Irish poetry regularly, is something special… so it has been a pleasure to witness and one of the highlights of my time here was being present for the inauguration of president Biden even though it was during the pandemic, and it was a small crowd. Just being there to see an Irish-American president take the oath of office was a highlight of my time in America.”

When Taoiseach Micheál Martin tested positive for Covid during his St Patrick’s Day trip to Washington, Mr Mulhall had to step in for a number of events.

“That was just one of the things you have to do as an ambassador,” he said.

“Obviously I was disappointed that the Taoiseach ended up with Covid when he was here, so I had to step in and do some of the things that he wasn’t able to do because of it… it was a thing I had to do.

“I wasn’t happy about it because I would have preferred one hundred times that he would have been able to do those events himself, but unfortunately that wasn’t the case. I felt genuinely sorry for him, it was an unfortunate time for him to catch Covid given he’d been free from it for two years, and he got it on the eve of going into the White House to meet president Biden which would have been an epic occasion, and it would have been wonderful to be present for that.” 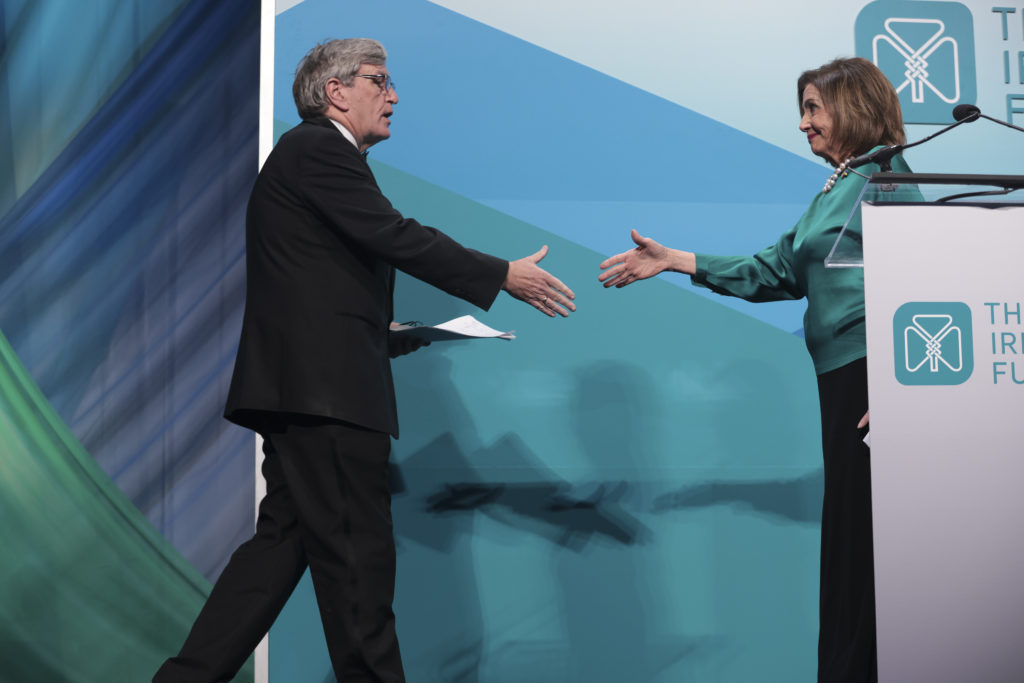 US Speaker of the House Nancy Pelosi introduces Irish Ambassador to Daniel Mulhall as she presents the Leadership Award during the Ireland Funds 30th National Gala at the National Building Museum in Washington DC. Picture: PA Images

Covid-19 also loomed large over the last taoiseach’s visit, when Leo Varadkar was in Washington when the severity of what was in store became apparent.

Mr Varadkar’s speech to the nation from Washington will go down in history, and Mr Mulhall said it was also the moment he realised how the pandemic would impact daily life.

“So did I…  after that speech, the following day the Embassy went into a lockdown, and we started working remotely, it was a dramatic day… one I’ll never forget. Suddenly everything goes down and a couple of days later the whole of America had shut down.

“It was just a coincidence that the taoiseach happened to be here at a time when the pandemic suddenly became super serious.

“The pandemic has done all kinds of terrible things to people all over the world. The year between March 2020 and the summer of 2021 I hardly stirred from Washington DC, I was here all the time and that was frustrating.

“But I always looked at it and said ‘hey, people are getting seriously ill and dying all over the world,’ whatever inconveniences there were for me and people doing diplomatic work over the Internet and Zoom calls, it was just something we had to do deal with, and we did.”

Flexibility and adaptability are key qualities for any diplomat.

These were two examples of how “adaptability” is key for any diplomat, Mr Mulhall said.

Mr Mulhall has also served as Irish Ambassador to Malaysia, Germany, and the United Kingdom, and he cited the 2004 Indian Ocean earthquake and tsunami as the standout example of how diplomacy requires quick reaction to world events.

“Flexibility and adaptability are key qualities for any diplomat because you live in foreign countries, different cultures, you have to cope with things as they happen.

“The best example I can think of from my career, not from the last five years, but on St Stephen’s Day 2004 I was at home having lunch with my family, I was the ambassador in Kuala Lumpur, when I heard word of the tsunami.

“I spent the next three weeks in Phuket searching for Irish people who were missing, injured or had lost their lives in that terrible tragedy. That was an example of how on Stephen’s Day we were expecting to have a few days off, everything changed and diplomats have to respond to these challenges and that’s why it’s a 24/7 job.”

Support for undocumented Irish people in the US is an ongoing issue for the Irish Embassy, and Mr Mulhall said it will remain an issue of importance.

“That is something the Embassy has been heavily engaged in over a number of years, along with issues like getting access to visas for Irish people, this has been one of our prime responsibilities over the last five years and beyond and will continue to be a significant thing for the Embassy going forward.”

Mr Mulhall is due to speak at the Kennedy Summer School in New Ross, which will run from September 8th-10th this year.

He will be discussing James Joyce’s Ulysses, which he recently published a book about called Ulysses: A Reader’s Odyssey.

“I published a book earlier this year called Ulysses: A Reader’s Odyssey, it’s an effort to produce an accessible commentary on that very complicated and complex novel that we’ve been celebrating the centenary of this year.

“My book is not for academics… it’s not for experts, it’s for the general reader, so I’m looking forward to talking to the audience in New Ross about Ulysses and the book I’ve written on it.”

Mr Mulhall is from Waterford, not far from New Ross, and while he said he would have loved to be there in person, he will be doing his talk remotely from New York as he is taking up a new role as Global Distinguished Professor of Irish Studies at New York University.

“I’ll be talking a lot more about Irish culture and history, and looking forward to engaging with students. I haven’t thought in a long time, so it will be a new challenge for me.”

Mr Mulhall feels Irish literature is one thing that has always put the country on the map all over the world.

“On the basis of 44 years in our foreign service, I believe our literature is one of our national treasures, and it’s a real asset to Ireland that we have such a strong literary tradition that has done enormous good in terms of raising our profile in the world.

“We’re a small country, so we don’t always have to be in the eye of the global community, but because of our literature we have a bigger and more prominent profile than a country of five million would have any right to have.

“I think there are two things that brand Ireland; one is our literature and culture more generally, the other is our Diaspora, the fact we have so many people around the world affiliated with Ireland, that makes a big difference for us, I think.”

For more information or to book tickets for the Kennedy Summer School, see kennedysummerschool.ie or call St. Michael’s Theatre on 051 421255.