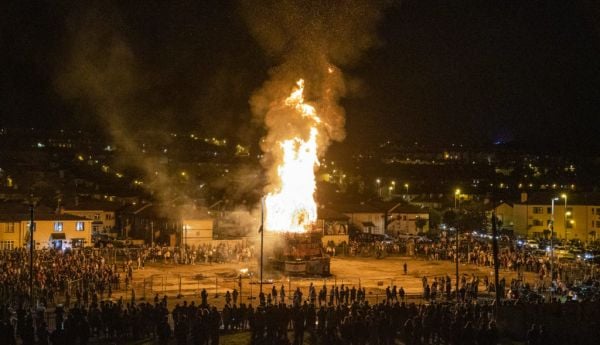 Police have carried out a search as they continue to investigate reports that shots were fired at a bonfire in Derry.

It was reported that shots were fired at the bonfire in the Meenan Square area of the Bogside at about 11.20pm on Monday.

Chief Inspector Michael O’Loan said: “A search was carried out in the area this morning.

“A number of items were seized which are now subject to forensic examination.

“This incident is reported to have occurred at around the time the bonfire in Meenan Square had been lit when we know there was a large number of people in the vicinity – an act that would be beyond reckless when so many people were present.

“We’re urging anyone with information, or captured footage, which may assist our investigation to call us 101, quoting reference number 2217 of 15/08/22.”

Police are also investigating the placing of items on the pyre, including political material, flags and poppy wreaths, as potential hate crimes.

They said they were trying to identify those responsible, adding that potential offences include the theft and destruction of political material, flags, banners, hate slogans and poppy wreaths.